PREMISE | Stand-up comic Notaro borrows heavily from her own life for this Southern-fried comedy, which sees “Tig Bovaro” move back to her Mississippi hometown after she faces a life-threatening illness and her mother passes away. Tig is a compulsively honest radio host — not to mention a lesbian — so her confessional on-air monologues ruffle a few feathers in her rural hometown, and she has trouble finding common ground with her stepdad Bill (John Rothman) and brother Remy (Noah Harpster). But she does strike up an interesting relationship with her radio producer Kate (Stephanie Allynne)… 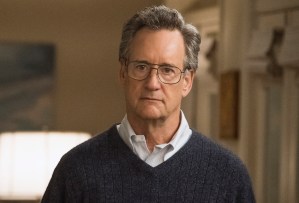 YOU SHOULD PROBABLY ALSO KNOW… | One Mississippi was already worth watching, but in light of the recent accusations about Louis C.K. (one of Notaro’s comedy mentors, and an executive producer here), it’s a must-watch, with a Season 2 storyline involving Kate and a creepy male superior at work that feels downright eerie now. Notaro and Allynne are married in real life, and Tig and Kate’s sweet friendship-turned-something more is thoroughly charming and achingly romantic. But the standout performance here is Rothman (seen at right) as Tig’s hilariously rigid stepdad Bill, a lovable crank who’s really one of TV’s most inspired comedic characters in recent years. In fact, One Mississippi thrives on awkward family interactions — which makes it perfect Thanksgiving weekend viewing!

IS IT COMING BACK? | Unclear. Amazon hasn’t officially renewed One Mississippi for a third season yet, but Notaro has said she “would love to do more seasons.” (Your move, Amazon.)

WHERE CAN I WATCH IT? | Both seasons, with six episodes each, are available to stream now via Amazon — so, at less than six hours combined, you can finish the series before you run out of leftover turkey.