CREATED BY | Jonathan Abrahams (Murder in the First, Mad Men)

PREMISE | After a messy break-up with his actress fiancée, big-time Hollywood movie star Kyle West (Dallas‘ Josh Henderson) stages auditions for his next co-star… and girlfriend. Enter Megan Morrison (Chicago Fire‘s Christine Evangelista), an unknown thespian/waitress who charms Kyle so much so that he offers her a contract marriage after one whirlwind date. The two embark on a romance that blurs the line between real feelings and staged publicity, leaving viewers to wonder until the end of the season — which concludes with a huge twist — about where the truth lies. 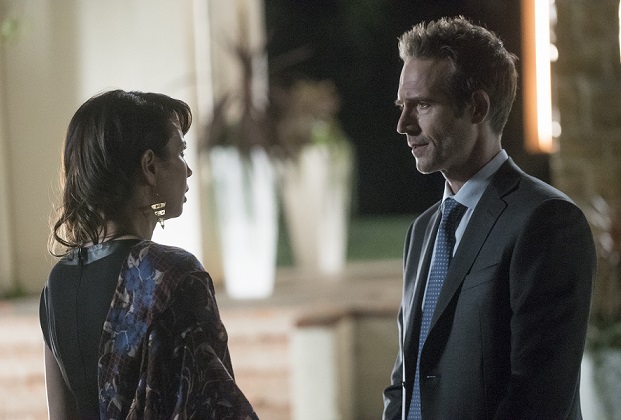 To complicate matters, Megan has a mysterious secret, and Kyle is involved in a cult-like, self-help organization called The Institute for the Higher Mind, which is run by his friend/mentor Terence (Alias‘ Michael Vartan). Arrow alumna Lexa Doig co-stars as Terence’s wife and Kyle’s producing partner, who has her own strange dalliance with… well, that would spoil you. Fans of The O.C. will recognize Autumn Reeser as Megan’s savvy agent.

WORTH YOUR TIME IF YOU ENJOY… | Smart, morally complex explorations about the underbelly of Hollywood and dark “fairy tale” romances. Sure, The Arrangement has soapy elements and glitzy Hollywood characteristics that keep it in line with the E! brand, but it also goes to some twisted places that you wouldn’t expect.

YOU SHOULD PROBABLY ALSO KNOW… | Creator Jonathan Abrahams says the series is not about Scientology or Tom Cruise and Katie Holmes’ ill-fated relationship… but the similarities will give you chills. And truthfully, we love that murky “what’s real and what’s not?” aspect of the show, because it keeps us speculating.

WHERE CAN I WATCH IT? | All of Season 1 is streaming on E!’s site. You can also purchase the episodes on iTunes, YouTube, Google Play, Amazon Video and Vudu.