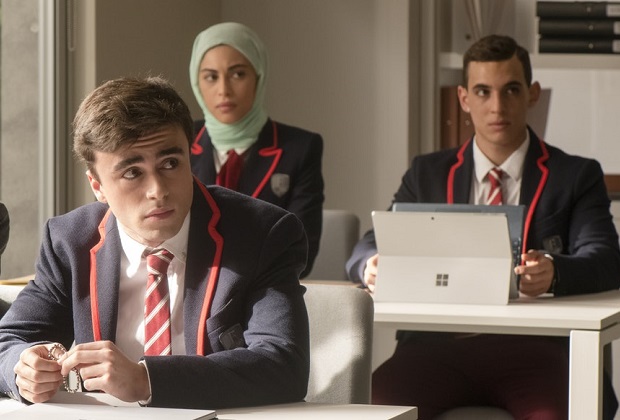 PREMISE | After the roof at Samuel, Nadia and Christian’s school collapses, the construction company gives them each a scholarship to Spain’s elite private school Las Encinas, where the uber wealthy teens aren’t too welcoming of their new wrong-side-of-the-tracks classmates. Big man on campus Guzmán and his friend-with-benefits/resident mean girl Lu set their sights on taking down Muslim transfer Nadia via a seduction plot.

The exception to the snobby mob rule is Marina, Guzman’s sweet but troubled sister who captures  Samuel’s heart. Meanwhile, social media-obsessed Christian falls for marchioness’ daughter Carla, who’s been dating Polo since they were kids… but that might not be a problem.

Rounding out the ensemble are Samuel’s troublemaker older brother Nano, closeted athlete Ander and Nadia’s drug-dealing brother Omar. Oh, and all the kids are being questioned in flash forwards about [Spoiler]’s murder. As the investigators try to figure out the killer’s identity, a multitude of twists give almost every character a motive.

WORTH YOUR TIME IF YOU ENJOY… | The opulent wealth, soapy love triangles and scandalous antics of teenagers in shows like The O.C. and Gossip Girl; the murder-mystery aspects of Riverdale, How to Get Away With Murder and Big Little Lies; and pretty people who look like they are seconds away from being cast in a CW pilot.

YOU SHOULD PROBABLY ALSO KNOW… | The European Spanish-language drama can be watched with subtitles or dubbing. (We recommend the former, although it will take a little extra concentration to keep up with the captions.) And although it is by all accounts a melodrama, Elite also has some intelligent things to say about religion, sexuality, economic inequality and power.

IS IT COMING BACK? | There is no news yet about a second season. UPDATED: The show has been renewed for Season 2.

WHERE CAN I WATCH IT? | Season 1 is available to stream on Netflix.