PREMISE | Yes, it’s yet another comedy about a stand-up comedian, written by a stand-up comedian. But Crashing — executive-produced by Judd Apatow, who co-wrote and directed several episodes — wins you over with the polite charms of Holmes, who stars as Pete, a squeaky-clean aspiring comic whose life falls apart when he discovers his wife (Lauren Lapkus) is cheating on him with a ponytailed art teacher named Lief (George Basil). Pete resorts to crashing on the couches on comedian friends like T.J. Miller and Sarah Silverman while he gradually hones his stand-up act to the point where the audience is actually laughing with him, and not at him.

WORTH YOUR TIME IF YOU ENJOY… | Pete Holmes’ nice-guy routine; the less glamorous aspects of the stand-up comedy scene; Apatow’s improvisational comedic style; deep dives into the nuts and bolts of the creative process; A-list comedians goofing around; ponytailed art teachers named Lief. 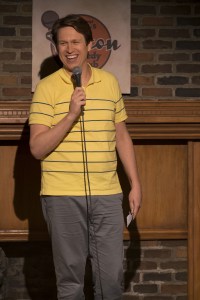 YOU SHOULD PROBABLY ALSO KNOW… | The bits about Pete’s marital woes are fine, but nothing we haven’t seen before. (Basil is lots of fun, though, as the obnoxiously friendly Lief.) Crashing really thrives when it immerses us in the everyday struggle that faces new comics like Pete, who have to hustle to bring in audience members and wait around for hours just to score a few precious minutes of stage time in front of a sparse, hostile crowd. (Watching him bomb and get heckled is more agonizing than any American Horror Story episode.) Pete’s Christian faith offers an interesting wrinkle, too, as he tries to work clean and maintain his purity in a notoriously filthy field. Like Holmes himself, Crashing is low-key and unassuming… but finds a way to sneak up on you.

IS IT COMING BACK? | Yes, this weekend, actually! Season 2 of Crashing debuts Sunday at 10:30/9:30c on HBO, with guest stars Whitney Cummings, Bill Burr and John Mulaney.

WHERE CAN I WATCH IT? | All eight Season 1 episodes are available now on HBO Go, HBO Now and HBO On Demand.