THE END OF THE F***ING WORLD

PREMISE | James (Black Mirror‘s Alex Lawther) is a troubled teen — a loner by choice with psychopathic tendencies. He’s spent much of his adolescence trying to feel something – anything, really — but has thus far come up short. After tiring of killing woodland creatures, he decides it’s time to graduate to murdering an actual human being. That’s where Alyssa (Penny Dreadful‘s Jessica Barden) comes in. She’s the new girl at school, a foul-mouthed rebel with a messed-up home life.

Thinking she can fall in love with James, Alyssa convinces him that they should leave everything behind and embark on a road trip. Little does she know he intends to make her his prey.

WORTH YOUR TIME IF YOU ENJOY… | Black comedy. Dysfunctional coming-of-age stories. Anti-romantic comedies about horrible people.

YOU SHOULD PROBABLY ALSO KNOW… | The show is every bit as bleak as it sounds, and is often quite violent. Along the way, you’ll begin to fall in love with these characters in spite of their heinous actions, particularly after the events of Episode 3. You’re not necessarily rooting for James and Alyssa, but you’ll care about what happens to them, especially after you learn why they turned out the way that they did. 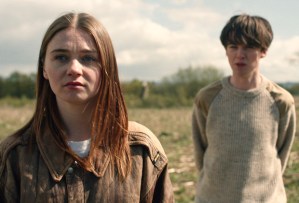 Barden is the breakout star here, though what Lawther manages to accomplish with such an understated performance is no small feat. Together, they have undeniable chemistry. The supporting cast also features terrific work by Gemma Whelan (Game of Thrones) and Wunmi Mosaku (Fantastic Beasts and Where to Find Them), who play a pair of police officers searching for the runaway teens, and Barry Ward (The Fall), who plays Alyssa’s estranged father.

If you’re still in, it’s worth noting that the show is constructed like a four-hour movie, so it plays better if viewed all at once. If your schedule doesn’t allow for that, at least make time to watch the first three episodes in one sitting to get a true sense of where the story is going.

IS IT COMING BACK? | Executive producer Jonathan Entwistle has indicated that Netflix wants a second season, though the general consensus seems to be that these eight episodes tell a complete story. The streaming service already has a history of renewing shows that were designed to run just one season (see 13 Reasons Why), so it could go either way. UPDATE: Renewed!

WHERE CAN I WATCH IT? | The complete first season is streaming on Netflix.

Will you embark on a journey to The End of the F***king World? And, without spoiling it for anyone, can those of you who have watched it say that you think the series would benefit from a second season? Drop a comment below.