PREMISE | Adlon (Louie) stars as actress Sam Fox, who has to balance a frustrating Hollywood career with being a single mom to three daughters: rebellious teen Max (Mikey Madison), mouthy middle child Frankie (Hannah Alligood) and sweetheart Duke (Olivia Edward). Sam’s a realist, always telling her girls the unvarnished truth about the harsh world they’re growing up in. Meanwhile, she also has to take care of her oddball mom Phil (Celia Imrie), who lives next door — and, oh yeah, maybe find a decent guy to date for once.

WORTH YOUR TIME IF YOU ENJOY… | Experimental, off-the-cuff comedies like Louie; shows with a strong female voice; TV kids who don’t act like “TV kids”; scathing showbiz satire; mother-daughter relationships that aren’t all hugs and rainbows. 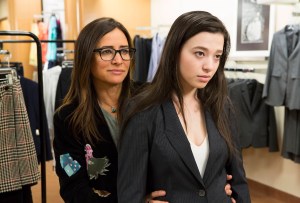 YOU SHOULD PROBABLY ALSO KNOW… | Adlon’s Louie co-star Louis C.K. directed the pilot and co-wrote most of Season 1’s episodes, but make no mistake: This is Adlon’s show. She digs deep into her own life for inspiration here, and emerges with a painfully honest, intensely relatable portrait of single motherhood, with none of the rough edges smoothed out. (Adlon was just rewarded with a surprising, and well-deserved, Emmy nomination for Lead Actress in a Comedy.) The supporting cast is strong, too, highlighted by the trio of young actresses playing Sam’s daughters and Imrie as the delightfully kooky Phil.

Sam’s adventures as a working actress in Hollywood are good for a few inside-showbiz laughs, especially with star-studded cameos from the likes of Julie Bowen and Constance Zimmer. But the heart of Better Things lies in Sam’s connection with her daughters, as she patiently guides them past coming-of-age obstacles like teen sexuality, gender identity and menstruation. She doesn’t coddle them by any means, but she’s always there for them when they need her. The result: a bittersweet family comedy that’s intimate and insightful, a little bawdy at times, often genuinely touching… and always hilarious.

WHERE CAN I WATCH IT? | Unfortunately, the streaming options aren’t great at the moment: For now, you’ll have to pay $3 per episode to watch on iTunes or Amazon Video. But Better Things come to those who wait: All ten Season 1 episodes will be available to stream on Hulu starting Tuesday, Aug. 15.

Press PLAY on the video below to get a taste of Better Things, then tell us if you’ll be catching up ahead of Season 2.