PREMISE | Imprisoned conman Marius Josipovic (My Name Is Earl‘s Giovanni Ribisi) is indebted to underground casino operator Vince (recurring guest star Cranston). Upon his release, Marius assumes the identity of his cellmate Pete (Grace and Frankie‘s Ethan Embry), then dupes Pete’s family into thinking he’s the long-lost relative they haven’t seen in 20 years. It’s all part of his plan to rob the family’s bail-bonds business and pay off his debts. In the meantime, Vince is holding Marius’ younger brother Eddie (Mr. Robot‘s Michael Drayer) as collateral, and threatens to start chopping off fingers unless Marius brings him his money within seven days. 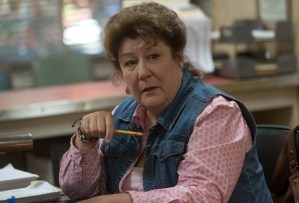 WORTH YOUR TIME IF YOU ENJOY… | A good con artist caper, the occasional heist film, or a complicated family drama. (The criminal element here feels like a mix of Ocean’s Eleven and White Collar.) It’s also worth checking out if you’ve ever fancied any of the character actors on hand, beginning with Ribisi, who thrives in the lead role he’s more than earned after 30-plus years in the business. Martindale and Gerety are equally terrific, while Cranston breaks bad in a whole new way.

YOU SHOULD PROBABLY ALSO KNOW… | The show was first developed at CBS (in early 2015), but the network passed on it in May of that year. Amazon picked it up shortly thereafter, at which point Shore stepped down as showrunner and Graham Yost (Justified) was installed to retool the would-be procedural (hence the one and only Case of the Week in Episode 1) and transform it into a serialized drama.

IS IT COMING BACK? | Yes. Amazon announced that it has renewed Sneaky Pete for Season 3.

WHERE CAN I WATCH IT? | The first two seasons are available exclusively on Amazon Prime.

Watch the series trailer above.