Brooklyn Nine-Nine just closed out Season 7 with the arrival of Jake and Amy’s son Mac, who was named after Jake’s fictional hero, Die Hard‘s John McClane.

Mac’s birth came following a citywide blackout which found Jake and Charles policing the streets (and foiling a bank robbery), all the while trying to get Jake back to Amy in time for the delivery. (Peralta ultimately hitched a ride on the back of Boyle’s equine nemesis, the newly promoted Lt. Peanut Butter.)

Meanwhile back at the precinct, Sgt. Santiago powered through her contractions and oversaw emergency protocol (with an assist from Diaz). She was forced to take charge when superior officers Holt and Jeffords found themselves stuck inside an elevator. While trapped, the captain and his lieutenant mastered the dance moves to Salt-N-Pepa’s “Push It,” which they later performed inside the interrogation room to distract Amy, who was about to birth Mac (sans epidural) in a makeshift delivery room designed by Hitchcock and Scully.

Here, series co-creator Dan Goor breaks down the feel-good finale, and reveals why he decided against another season-ending cliffhanger.

TVLINE | What brought you more joy — having Andre Braugher unleash Capt. Holt’s inner John Wick, or having him mouth along to Salt-N-Pepa’s “Push It”?
Salt-N-Pepa! [Laughs] That was just unbelievable to watch.

TVLINE | Brooklyn Nine-Nine finales tend to have a lot of moving pieces. There was Jake and Rosa’s failed attempt to take down Hawkins, then the gang’s concerted effort to salvage Jake and Amy’s wedding, followed by the Suicide Squad mission to expose Commissioner Kelly. Where does this finale rank in terms of difficulty pulling off?
This was probably the hardest to pull off, partly because it was a really intricately plotted script, but also because it involved so many night shoots. We wanted to shoot a lot of it outside to sell the idea that there was a blackout, because [being outside] is so much of the experience of a blackout in New York. We had to do four night shoots, which is starting people at 6 or 7 pm and going until 3 am. Everyone complains, understandably, when there’s one night shoot in a week, so to do four was insane. People were literally going crazy, as they had every right to do, because they were sleep-deprived. Then it started raining, and there was a horse.… [Laughs] Matt Nodella is our line producer, and the production elements were so over-the-top. I thought he did a great job. It really looks like a large swath of the city has been shut down. 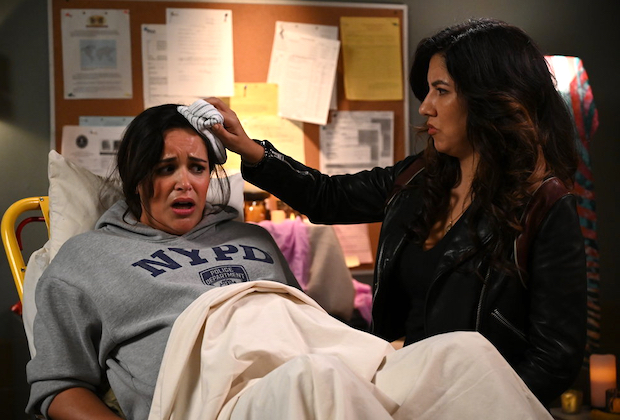 TVLINE | Had you considered doing a blackout episode before? Or did the idea crystalize when you were trying to figure out something that might make it difficult for Jake to get to the birth of his child?
It was a combination of the two. It was definitely an idea that we had up on the board for a long time, and we were looking for the right [episode]. I lived in New York City in 2003 when that huge blackout happened, and my wife worked in Midtown and had to walk home over the Brooklyn Bridge. A lot of this didn’t wind up making it into the finale, but there were a lot of moments [during the ’03 blackout] where civilians were stepping up — like, some man helped my wife cross the bridge. He literally hoisted her over a guardrail because they were walking on the street, and then they couldn’t anymore. And I don’t know if you remember, but pedestrians just started stepping up and directing traffic at intersections, restaurants were giving stuff away…

We were conscious of the fact that a lot of shows have done blackout episodes, but the thing that felt different for us is that they’re cops. For most people, a blackout shuts down their lives, and for them, it activates their professional lives.

TVLINE | Jake and Amy named their son after Die Hard‘s John McClane. Were there any other baby names tossed around the writers’ room before you agreed on this one?
Hans Gruber. [Laughs] Hans Gruber Peralta. And there were others. It was hard, but it was somehow easier than naming Gina’s baby Enigma, because she could have been named anything. “Do we name him after one of their fathers?” That felt really wrong. “Do we name it after Captain Holt?” That felt like too much. When we settled on Mac, it just felt right. But we did go back and forth for a while between that and… not naming him, just so we didn’t have to worry about it until next season. 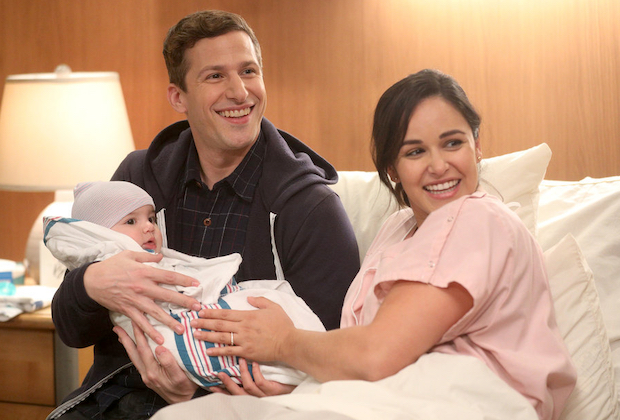 TVLINE | This was the first finale that didn’t end on a cliffhanger. Did you actively decide against one this time?
We had resolved the big Holt arc for the year… [and] we found out that we had a Season 8 earlier [than usual], so we didn’t feel like we needed [a cliffhanger] to convince the network brass that they’ve gotta keep us going. There was discussion as to whether or not the end of the finale should be Amy breaks her water, and then the Season 8 premiere is what you saw as the finale. There was also talk that the [final scene] could be Jake and Amy holding up the kid to the squad and saying, “And we’ve named him…,” and then cut to “Not a doctor, shh!” which felt lame. But it also kind of felt like, “This is an unambiguously joyful moment. Let’s just enjoy it.”

TVLINE | At one point you debated whether you even wanted Jake and Amy to have a baby. Now that you’ve had a chance to reflect on the season as a whole, are you happy that you pulled the trigger on that storyline?
Yes, I really am happy we went through with it. Episode 6, where they mostly dealt with [trying and struggling to get pregnant], is one of my favorite episodes that we’ve ever done, and I’m happy we had the opportunity to do it. And I think it’ll give us some storylines for next year that’ll be fun and interesting…. We just started the [virtual writers room] up, but I do look forward to that.

TVLINE | Have you and the writers already discussed how much you intend to focus on Jake and Amy as parents?
We’re very conscious, similarly to when we coupled them up, that this is a workplace show. While we like doing comedy about them as a romantic item, or as a married couple, or [now] as parents, we primarily do comedy about them working together. Hopefully we’ll be able to strike a similar balance, and I think we’ll be conscious of the fact that they have a kid. That doesn’t mean that Amy and Jake are going to be in the apartment all the time, and [we’ll be] doing stories about the kid. But that also doesn’t mean we’re going to ignore it. I think it’s an interesting element to have both Jake and Amy be working people who have to figure out how to balance the career they love with being good parents, which is what they want to be.

TVLINE | This was your shortest season yet. Do you wish you had had more episodes, or did you like having only 13?
Creatively, it just allowed us to focus on all the episodes, give a little more time to each one. As a series grows and matures — we’ve now done 143 episodes — it’s harder to find stories that feel unique, and we don’t want to be in the business of repeating ourselves too much. 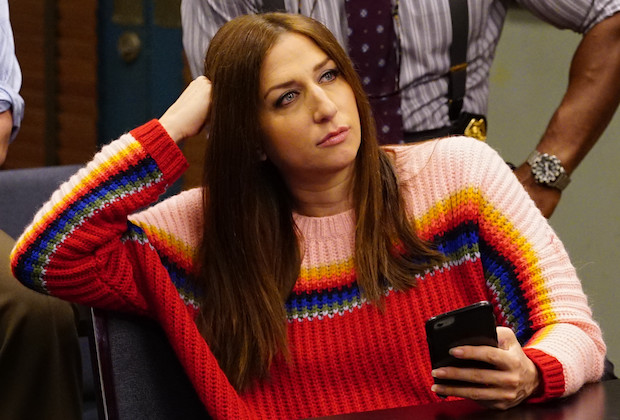 TVLINE | Were there any storylines, or any characters in particular, that you wanted to focus more on in Season 7, but didn’t have the time?
The only regret I have with having 13 is that we didn’t figure out a Gina episode, and I want to make sure that she’s in Season 8. I love Chelsea Peretti. I think she’s one of the funniest human beings in the world, and I love the character of Gina Linetti. Looking back, we were still able to do a Pontiac Bandit episode, a Halloween heist… Pimento was in there, we had Marc Evan Jackson… we had a lot of our favorites. We also got to do that three-episode arc with Vanessa Bayer, so I feel like we weren’t [too] limited in terms of what we were going to do.

TVLINE | You mentioned getting to do all the fan-favorite episodes. You even brought back the Jimmy Jab Games! Assuming you continue to get short orders, though, will you feel obligated to continue revisiting those traditions on an annual basis?
I think we will always do a heist. After our second one, we had a conversation in the room, the tenor of which was, “We stop doing it now, or we do it forever.” But obviously, if stories dictate other things, we’ll go in other directions. We’re doing the things for the fans because we’re also fans. I don’t ever not want to see a Pontiac Bandit episode. I don’t ever not want to see Marc Evan Jackson as Kevin. 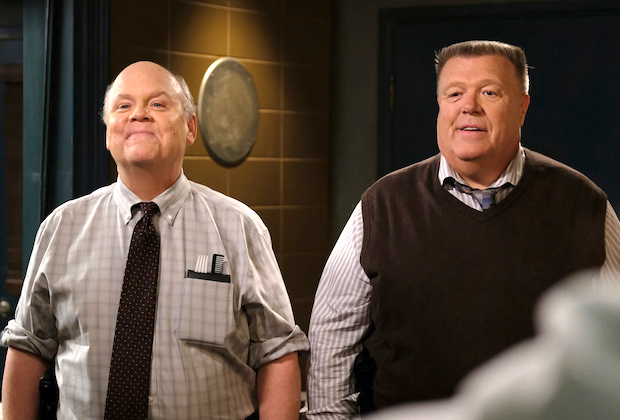 TVLINE | Brooklyn has always been grounded in reality, with episodes focused on racial profiling, the #MeToo movement, and most recently, illegal immigration. Obviously, we’re in the midst of a global pandemic, and one that has hit New York City particularly hard. Have you been thinking about how you might address the coronavirus in Season 8?
The [virtual] writers’ room has just started up, and that is really what we’re trying to figure out. Because not only is it set in New York, but they’re first responders, and something like one in five New York City police officers is out sick or self-isolating, so there’s a real debate in the room as to what we should do and how much we should focus on it. I feel like we will in some way acknowledge it, and live in it, or live with it. But we’re also conscious of the fact that the show has been a nice escape to some extent. That’s the debate. How do you balance being a fun escape with keeping the characters grounded within the world — and relevant? We really want to make sure we get that right, and we’re talking about it a lot.

What did you think of the Brooklyn Nine-Nine finale — and Season 7 overall? Weigh in via the following polls, then hit the comments with your reactions.