Did a Brooklyn Nine-Nine officer just break bad? That seems to be the case, based on the tag scene at the end of Thursday’s episode.

Throughout the second Jimmy Jab Games, Charles tried to boost the confidence of Vanessa Bayer’s Debbie Fogle. “You can do anything that you put your mind to,” he told her, before forfeiting his baton and the title of “Greatest Showman” to Holt’s partner in crime-fighting. Fogle took Charles’ words to heart, then put her new, can-do attitude to work in unexpected fashion.

In the closing moments of the episode, we watched as Fogle broke into the precinct’s evidence lock-up. (“I can do anything!” she exclaimed. “Anything I put my mind to!”) She used the baton to point the surveillance camera away from the crime, then proceeded to fill a rolling duffel bag with an alarming amount of contraband. 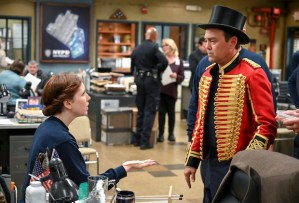 Up until this point, all we knew about the recently introduced Officer Fogle was that she joined the NYPD to solve the mystery of who killed her twin sister. It’s unclear whether this latest development has anything to do with that dangling (and tragic!) plot thread, but all will (presumably) be answered in the Feb. 27 episode, titled “Debbie.” The synopsis reads as follows:

When cocaine and weapons are stolen from the evidence lock-up, the squad must investigate the Nine-Nine itself.

* Jake spent the majority of the Jimmy Jab Games reckoning with growing up. Throughout the competition, Amy’s husband made a series of harebrained decisions — including wagering their new Sedan as part of a bet with Hitchcock — in an effort to prove to himself that he hadn’t morphed into some “boring, responsible guy.” In the end, Amy assured Jake that he hasn’t changed all that much; he is still irresponsible at times. Then, with his wife’s encouragement (and a much-needed adrenaline boost, courtesy of Fogle’s EpiPen), Jake defeated Hitchcock, who was too doped up on a cocktail of Scully’s meds to complete the final Jimmy Jabs challenge. 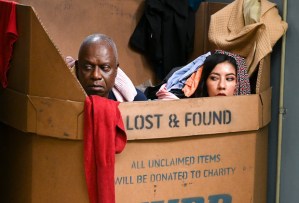 * Rosa revealed to Holt that Jocelyn broke up with her. Afterwards, the former captain accompanied Rosa to Shaw’s Bar to drown her sorrows in beer and death metal. (It was also mentioned in passing that Rosa has repaired her relationship with her parents since she first came out to them in Season 5.)

Did Brooklyn Nine-Nine‘s “Jimmy Jab Games” sequel live up to your expectations? And what did you think of the Fogle-centric cliffhanger? Is Bayer’s character a dirty cop? Hit the comments with your reactions.