Brooklyn Nine-Nine on Tuesday closed out its exceptional fall run with two big returns and one not-so-thinly veiled threat.

Before we get to any of that, let’s start with Rosa, who in the first half-hour not only came out as bisexual to the rest of the squad, but also to her parents (From Dusk Till Dawn’s Danny Trejo and Orange Is the New Black’s Olga Merediz), who were not nearly as understanding. She tricked Jake into attending dinner with Mom and Dad, who assumed that her big announcement was that she was dating Jake, despite the fact that he’s engaged to Amy. She eventually came forward and told them she’s been dating a woman after they implied that they rather their daughter be Jake’s side piece than come out as gay. 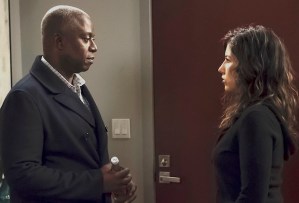 Later, at a family game night, Mr. Diaz made matters worse when he suggested that his daughter’s bisexuality was just a phase. The next day, he turned up at the precinct to apologize and told Rosa that he’d support her no matter who she loved, but that her mother would need some more time. As a pick-me-up, Jake rallied his fellow officers (and Gina, who’s back from maternity leave!) and headed over to Rosa’s to start a new game-night tradition. There, Holt took Diaz aside and told her she should be proud of herself. The openly gay captain then thanked her for her bravery, saying, “Every time someone steps up and says who they are, the world becomes a better, more interesting place.” Afterwards, he went in for a hug, and this recapper’s apartment suddenly got real dusty.

In the second episode, Seamus Murphy (Paul Adelstein) returned to ask Holt for that dreaded favor, and it was… to acquire a city permit for a neighborhood block party? Of course, this wasn’t quite as innocent a request as it seemed. The party was meant to serve as a distraction so Murphy and his henchmen could ambush an armored truck and steal $20 million in bonds.

Holt had no choice but to honor Murphy’s request. As you’ll recall, he promised the criminal a favor in exchange for supplying him with the dirt on Hawkins needed to get Jake and Rosa out of prison. To make sure Holt’s hands weren’t dirtied in the process, Jake and Charles used Murphy’s dimwitted nephew Kyle (Love‘s Mike Mitchell) to plant a bug on the crook. In doing so, the detectives were able to find out when the heist was going down so the truck could be intercepted and emptied before Murphy and his men got to it.

Afterwards, Holt and Jake had Kyle put in protective custody, fearing Murphy would go after his own flesh and blood for interfering with the heist. It didn’t take long before Murphy connected the dots back to Holt, approaching the captain a few days later and making his blood run cold: “You mess with my family, I mess with yours,” Murphy warned. “You tell your husband Kevin I’ll see him real soon.” (Gulp!)

* Stephanie Beatriz did some really great, subtle character work this week and last throughout Rosa’s coming-out story. We’ve never seen Diaz quite this vulnerable, and Beatriz managed to convey how overwhelmed the character was with just one look. Circle back to the close-up on Diaz as her father walked out of the precinct. Everything she was feeling could be felt just by looking at her face. That’s a job well done! 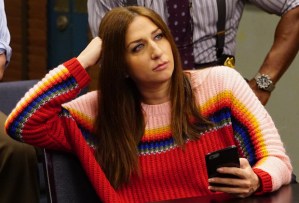 * These last dozen-or-so episodes have done a terrific job showing how much Jake has matured without losing the essence of his character. The same can be said about Gina upon her return. Making her a mom, even if it was influenced by Chelsea Peretti’s real-life pregnancy, has proven to be a great idea. The C-plot involving her sneaking out to go see her daughter was really sweet, and a total surprise.

* If you weren’t already convinced that Melissa Fumero is Season 5’s MVP, look no further than Amy “malfunctioning” after being told that she didn’t have all the necessary paperwork to file for a city permit.

* Also great? Hitchcock being the one to help Amy get the permit paperwork expedited. (“Hello, there. I’d like to humiliate some hussies, and I’m in a hurry.”)

What did you think of the Brooklyn Nine-Nine fall finale? Grade it via the following poll, then sound off below.