In Brooklyn Nine-Nine‘s Season 7 premiere, Jake and Amy have an important discussion. The sergeant climbs into bed and reveals to her husband that she thought she was pregnant, but it was just a false alarm. They agree that it would’ve been crazy, having previously decided to wait another year, but it also would’ve been “kinda cool.” And so, the couple decides to start trying for a baby.

Jake and Amy first debated bringing a child into the world back in the Season 6 episode “Casecation.” At the time, Jake was hesitant about having kids, but eventually came around to the idea of starting a family — someday. 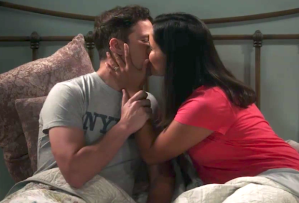 “I had a lot of internal debate about whether I wanted to do this storyline,” series co-creator Dan Goor tells TVLine. “I don’t want it to seem like the show is coming down on the side that the only way in which a couple can be happy is to have kids, so I didn’t want to make it seem like there’s this inevitability to them having kids.”

Goor also grappled with how a “Peraltiago” baby might change the series’ DNA. “It’s a workplace comedy, and kids aren’t usually a part of the workplace,” he says. “I’m also aware of the fact that most shows make their characters have kids because there are only so many stories to tell,” but that wasn’t the case here. It also had nothing to do with actress Melissa Fumero’s real-life pregnancy. “We had completely broken [Amy]’s storyline before she told us that she was pregnant,” he confirms, “so it in no way informed what we ended up doing.

“The thing that actually convinced me that it would be a worthwhile storyline was talking to Melissa about Amy both trying to have kids and having kids,” Goor reveals. “We have a very strong female character who loves her job, and… having a kid and trying to have a kid are things that women in the workforce deal with. There are conflicts that arise out of that, and there are difficulties and obstacles, all of which provide for good stories. It was really talking to Melissa that made me think, ‘This is a worthwhile thing to do.'”

Are you on board with a potential “Peraltiago” baby? Grade B99‘s first episode back, then sound off in Comments.