Brooklyn Nine-Nine on Thursday treated fans to a very special — and at times, very serious — episode that marked a Peraltiago turning point.

In the episode, Jake and Amy celebrated their one-year wedding anniversary at the hospital while standing guard over a comatose mobster named Rojas. It was Jake who came up with the idea to turn the potentially humdrum assignment into a “casecation” for him and his equally overworked wife, who agreed to stick around after getting Capt. Holt’s approval.

With Charles’ help, Jake turned the patient’s room into a Parisian-themed experience decked with lights, an Eiffel Tower statue and a selection of budget cheddars. As the couple embarked on a countdown of their favorite moments from Year 1 of marriage, eavesdropping patient-next-door Pam (played by SNL vet Julia Sweeney) entered and noted that Jake and Amy would make beautiful mixed-race babies. Amy responded by saying they’re not quite there yet, but are planning to start a family soon, which surprised Jake.

As we’d soon find out, Jake and Amy never discussed having kids prior to getting hitched. While Amy has always wanted to be a mother, Jake has never given much thought to becoming a father. What followed was a structured debate between husband and wife presided over by licensed debate moderator Capt. Holt, during which Jake cited his well-established daddy issues as reason not to start a family. What’s more, he said, both he and Amy are dedicated to their careers, and neither one of them should have to sacrifice that to stay home with a baby. Once Amy pointed out that she’d been pining for a promotion to lieutenant in order to have more flexible work hours, Holt relinquished his moderating duties to Kevin (who joined them via speakerphone), citing a potential conflict of interest. Kevin then relinquished his duties to vice president of the debate moderator club Gail, citing his own potential conflict since husband Holt is something of a father figure to Peralta.

Once Holt exited, Jake and Amy continued their conversation in private. Amy apologized for insisting on a debate, but refused to put this particular discussion on hold, despite Jake’s desire to change the subject. She told him that he could take a day, a week, or even a month to think it over, but she wouldn’t wait around for two years only to find out that he was never going to change his mind about having kids. At this point, Terry and Rosa showed up on important police business, having just been notified that Rojas’ killer was on his way to finish the job. Jake and Terry stayed back to make sure Rojas was protected, which afforded the sergeant a chance to advise Jake against starting a family unless he was definitely ready. Meanwhile, Amy and Rosa ventured towards the nurses’ station to keep an eye out for suspicious incoming visitors, where Rosa told Amy that she should definitely have kids. (She even offered to bully Jake into changing his mind!) 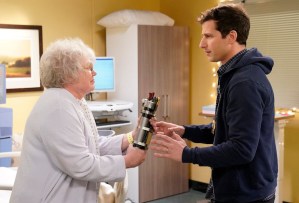 Moments later, a suspicious looking man exited the elevator and attempted to get to Rojas, but was ultimately stopped by Rosa. Then, shortly after Jake and Terry ran out thinking the killer had been apprehended, Jake put two and two together and realized that the man was a decoy. Armed, he ran back into Rojas’ room, where he found none other than Pam (!) standing over the mobster’s bed with a bomb (!!) in her hands. She explained to Jake that an Antonio Banderas type offered to give her $500,000 to detonate the bomb, which she was hoping to leave to her beloved son and grandchild. Jake managed to talk Pam down by promising her that she’d be sent to a prison with myriad arts and crafts, and called in the bomb squad to retrieve the homemade explosive device.

Afterwards, Jake was reunited with Amy at the nurses’ station. There, he told her there was a second bomb on site: her butt. Her butt was the other bomb, he said, harkening back to their marriage vows. Amy then told Jake that she’d requested next week off so they can take an actual vacation to the waterpark of his dreams. Meanwhile, Jake let Amy know that while he was still scared, he thinks he’d like to start a family someday — just not right now. Amy was A-OK with that, and said that they’d revisit the conversation when they were both ready.

What did you think of this week’s Jake and Amy-centric episode of Brooklyn Nine-Nine? Do you have your fingers crossed for a Peraltiago baby, or are you hoping The Powers That Be save that sorta development for an eventual series finale, as to not mess with the current dynamics at the precinct? Drop your thoughts in a comment below.