As you’ll recall, the previous episode ended with quite the twist: We watched as Vanessa Bayer’s character stole 20 bricks of cocaine and machine guns from the evidence lockup. This week, she returned to the Nine-Nine amid a precinct-wide investigation and was obviously guilty to the entire squad. When Terry brought her into the interrogation room for questioning, she revealed that she was working for notorious crime boss Silvio Nucci, but didn’t say why — not until Jake convinced Rosa that they should pose as crooked cops and accompany Fogle to the handoff.

Holed up in a hotel room, Fogle told Jake and Rosa that she agreed to do this for Nucci in exchange for $1 million, part of which her father needed for an experimental surgery. (She also let slip that her cousin is none other than disgraced Subway spokesman-turned-convicted sex offender Jared Fogle. Oof.) 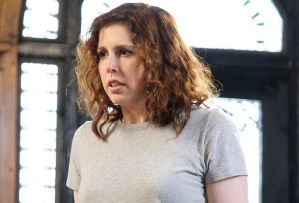 Soon enough, Fogle started snorting coke and digging herself into a deeper and deeper hole. She eventually went full-blown Perdita and had Jake, Rosa and her disapproving mother tied up in a mansion she rented on AirBnB, where the handoff would go down. But before Nucci and his henchmen arrived, Rosa convinced Fogle that she was in way over her head. If she didn’t untie them, and Nucci arrived and killed her fellow officers, she’d be an accessory to murder, which was never her intention. Rosa also sympathized with Fogle, having dealt with family members who always looked down on her. (Earlier in the episode, Rosa revealed that she was a teenage ballerina hopeful who cracked under pressure and broke into a bunch of houses, before she ultimately wound up in juvie. That’s quite a bit of backstory not to disclose before now!) Rosa’s compassion convinced Fogle to untie them all before Nucci arrived, then the rest of the Nine-Nine showed up to arrest the sought-after mobster.

As for Fogle, it was revealed that she would likely spend 10 years in prison (as opposed to 30, had Rosa not told the D.A. that she cooperated with them).

What did you think of Brooklyn Nine-Nine‘s Fogle-centric episode? And are you sad to see the Vanessa Bayer character shipped off to prison, presumably never to be seen again? Sound off in Comments.