THE PERFORMANCE | When it was announced that Lloyd, so beloved for his work on Taxi and in the Back to the Future films, would be guest-starring on CBS’ No. 1 drama, you had to suspect something special was on tap. But perhaps no one anticipated the range of emotions his performance would evoke.

As Joe Smith, a 95-year-old who tasked Gibbs’ team with proving that he was stationed aboard the USS Arizona at the time of the attack on Pearl Harbor (and thus deserves to have his ashes interred there upon his death), Lloyd was, yes, amusing, such as when insisting that McGee and Jimmy make like CSI by comparing DNA samples. And yes, he was formidably gruff when chastising Bishop and Torres for their anemic knowledge of naval history.

But when Gibbs pressed the alleged vet to make his own case by detailing the sights, sounds and smells of Dec. 7, 1941, Lloyd let loose with one of the most vivid, anguished monologues in recent TV history. “It was me!” he bellowed, in such a way that Gibbs (Mark Harmon, with one of his own finest performances) probably needed to hear nothing else. But he would hear so much more. “It was like the Devil opened his mouth and made a noise that was all screaming!” Joe recalled, gesticulating as if trying to wave away the memory of “body parts all over the deck,” while any intact seamen were “charred to the bone.” Joe’s recollection got personal, and Lloyd broke down sobbing, as he described fishing three men out of the water, including his friend Ozzy: “We should have been tossing a football!”

Joe summed up his feelings by saying that his crew mates were brothers to him, and when he passes, “I want to be laid to rest with my family. I want to go home.” That wish would be granted very soon after as Lloyd delivered a gut punch of a death scene, when Joe suffered a sudden heart attack and faded in Gibbs’ arms.

THE PERFORMANCE | Though FX on Hulu’s newest drama is centered on conservative activist Phyllis Schlafly, the third hour of the series’ three-part premiere focused on Aduba as Rep. Shirley Chisholm. And we’re glad — because that means we get plenty of time to watch the Orange Is the New Black alum’s superb take on an American political icon.

“Shirley” follows Chisholm through the 1972 Democratic National Convention, and Aduba skillfully plays the elected official’s frustration as she encounters mounting opposition to her historic presidential run. When Chisholm’s fellow members of the National Women’s Political Caucus refuse to support her Oval Office aspirations, she straightens her spine and stares them down, pointedly asking how things would be different if a white member of the feminist group were in her place. Shirley is angry, but it’s a righteous anger, and Aduba’s performance sings with the certainty that her character is doing the right thing at the right time.

And that’s also why she’s so effortlessly heartbreaking later in the episode, when Shirley confides in husband Conrad how hurt she is by her colleagues’ lack of support. Aduba replaces the Congresswoman’s earlier bravado with fury over the injustice she’s experiencing, and she physically shakes. It’s riveting. “Why am I the only on at this convention who thinks a Black woman being president is worth the run?” Aduba cries, her voice breaking as Chisholm hovers on the verge of tears.

Historical Spoiler Alert: Chisholm does not secure the Democratic nomination for president. But the way that Aduba aces the boundary-breaking politician’s rollercoaster of an episode? That definitely has our vote.

THE PERFORMANCE | Kim Wexler doesn’t get rattled easily. The hyper-competent lawyer is known for her unflappable professionalism, so a casual viewer might be tempted to overlook Seehorn’s consistently terrific work. (The Emmys sure have so far.) But Seehorn has quietly been delivering one of the best performances on TV, and this week’s pivotal episode cemented that, as Kim fended off a murderous drug cartel kingpin, not with brawn or fury, but with well-argued logic.

Kim has been defending Jimmy all season long — she even married the guy so she wouldn’t have to testify against him — so when drug runner Lalo waltzed into Jimmy’s apartment, gun sticking out of his waistband, we knew she wouldn’t let Jimmy go down without a fight. She stayed silent as Lalo relentlessly needled Jimmy for answers, but like the vigilant attorney she is, she finally raised an objection. “Are you kidding me with this?” she exclaimed, launching into a detailed argument that verbally decimated Lalo’s suspicions, point by point. Seehorn channeled Kim’s mounting fear and anxiety into the legal equivalent of a butt-whupping, even mocking the fearsome Lalo for his own failings: “What kind of operation are you running here, anyway?” By the time she told Lalo to “get” his “s—t together,” Lalo was left speechless… and so were we. 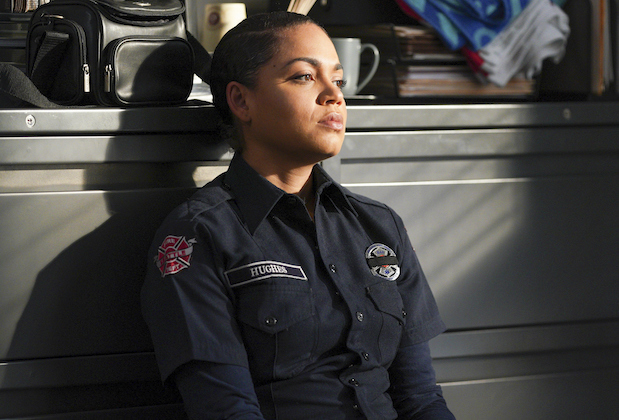 HONORABLE MENTION | Honestly, not a week goes by that we couldn’t sing the praises of Station 19’s Barrett Doss, who plays Vic. So great a gift from the romcom gods is she that her character’s rebound romance with Grey’s Anatomy’s Jackson has almost made us forget the misfire that was “Jaggie.” (Almost.) And in Thursday’s episode, the actress reminded us that she’s as adept at playing pathos as she is lighter fare. Though the human sunbeam was irresistibly funny in Vic’s efforts to recruit and shoot her fellow firefighters for a sexy calendar, when the reason for the fundraiser came crashing down on her anew, her portrayer loosed a depiction of grief that felt altogether authentic. It was messy, breathless, raw. In other words, perfect. 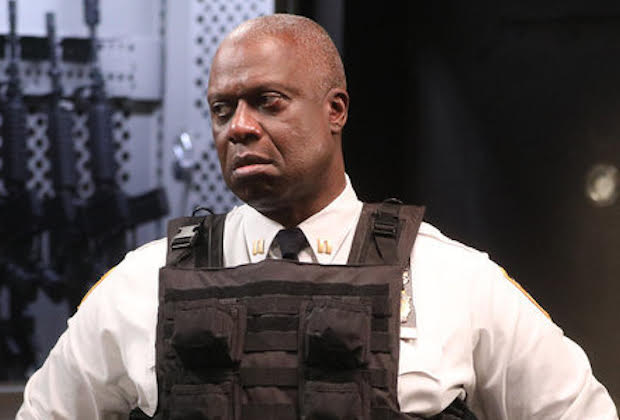 HONORABLE MENTION | The abduction of Captain Holt’s beloved dog Cheddar provided Brooklyn Nine-Nine’s Andre Braugher with a wildly entertaining showcase. We could have easily written a couple of hundred words about his exquisite deadpan alone, specifically how he dryly referred to the kidnapped corgi as his “fluffy boy.” Even more impressive, though, was how he managed to portray the typically stoic precinct chief as both an unhinged badass and a total screwball when he finally came face to face with Cheddar’s captor. He went full-blown “John Wick” on the guy — and the “sumbitch” didn’t know what he had coming. Just like Jake, we were grinning from ear to ear as Holt warned of a “s—tstorm” about to rain down on the perp. Holt’s tone conveyed strong contempt for the dognapper, while Braugher’s spirited delivery made us laugh until our sides hurt.