Brooklyn Nine-Nine aired its Season 5 finale on Sunday, which marked two major milestones. First and foremost, Jake and Amy tied the knot in a last-minute ceremony (after a bomb scare derailed their wedding). The second milestone was in regards to the life of the show itself; the episode doubled as the Golden Globe-winning comedy’s last broadcast on Fox, before moving to NBC in 2019.

On Friday, TVLine got on the phone with co-creator Dan Goor, who spoke about the series’ cancellation and subsequent “rebirth,” the Peraltiago wedding, Capt. Holt’s potential promotion and more.

TVLINE | This time last week, I did not expect we’d have a chance to talk about the finale.
Neither did I!

TVLINE | Are you still processing everything that’s happened?
I am… I’m still in a state of euphoria. It’s been a crazy whirlwind. Not only was it the cancellation and getting picked up, but it was going to the [NBC] Upfronts. It was just fantastic, just a wonderful story for us [as a show] to live through.

TVLINE | There was a lot of speculation about Hulu being the most likely home once Fox dropped the ax, then all of a sudden it wasn’t an option. When did you first find out that NBC was a possibility, and what was it like getting that call that the show had been saved?
I should say, thinking Hulu was the most likely [home] was… because The Mindy Project went from Fox to Hulu. Most of the nitty gritty sausage-making of it was performed by the studio; I’m a little bit in the dark about a lot of the details as to what happened. The phone call was around 8 pm on Friday night, and I was under the impression that most people making the decisions are on the East Coast, and no decision would be made that night. Then I got a text saying that NBC was picking it up… and I was just over the moon. Then we all got on the phone — all the producers and Andy Samberg — and talked through everything, and it was really just a wonderful experience. It was a rebirth.

TVLINE | When we last spoke, you stressed that the Season 5 finale was not intended to be a series finale. Talk to me a bit about what it was like walking that line between wanting to give fans closure in case it had been the end, without closing the book on Nine-Nine.
Great question. The easy answer to that is that we didn’t want to do anything that would absolutely blow up the world at the end of the finale… In other words, we didn’t want to do a finale where everyone got sent to different precincts, or main characters got killed off… and we also didn’t want to do a story where half or all of them got promoted, then we’d have to find a way to pull them back together. At the same time, we wanted it to have… emotional closure, and I think the wedding provides that. Also, there’s an element of closure which is, I mean, not full closure because the series will continue to explore these relationships, but Holt saying “I love you” to Jake and Amy is a very significant moment in those characters’ lives.

TVLINE | Was it difficult writing Jake and Amy’s wedding vows?
[Executive producer] Luke [Del Tredici] and I talked about them a lot beforehand. The difficulty of writing vows on a show like Brooklyn is we’re always committed to making them funny, but we also want them to be sweet, loving and believable… They didn’t change much after the first draft, but there were some jokes we cut at the table read. 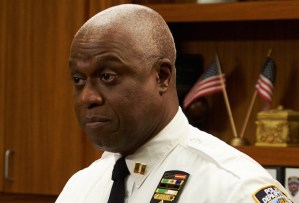 TVLINE | Why didn’t you reveal whether Capt. Holt had been named NYPD commissioner?
We want to keep the world interesting, and we thought it’s a fun to have a cliffhanger and wonder what’s going to happen next year. And the truth of the matter is, it’s nice to give yourself time as writers and producers to figure out if the idea you have is the right idea for next season.

TVLINE | Is there a fear that making Holt the commissioner will alter the series’ dynamic, especially if he’s no longer working at the precinct?
Yes, that would certainly be a fear, but the counter to that would be, “Is it also an opportunity?” So I think when making a decision like that as a writer, you have to ask if there’s more advantage to mixing things up, or [if it’s more of a] disadvantage disrupting a world that people [already] like. 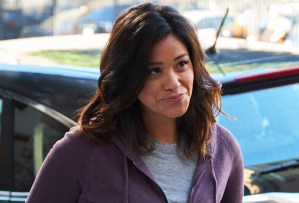 TVLINE | We nearly broke Twitter when we posted the first footage of Jane the Virgin‘s Gina Rodriguez as Rosa’s new love interest, Alicia. Should viewers expect to see more of her moving forward?
Absolutely, that is the hope. Schedules allowing, we would love to have Gina Rodriguez back [in Season 6] and explore Rosa and Alicia’s relationship, and how it [affects] Rosa’s relationship with her parents. We’ve always had fun writing dating stories… and we would all like to write the Rosa/Alicia arc.

TVLINE | The finale featured the return of both Kyle Bornheimer’s Teddy and Fred Armisen’s Mlepnos, who was in the very first episode. Were there any other guest stars you wanted to include, but for any number of reasons it didn’t pan out?
The guest I most wanted at the wedding was Fred Armisen’s Mlepnos. Even if there was a one-percent chance that this was going to be our last episode, he was in the pilot… [and] it’s very full circle. If it had been possible, and if we felt there was time to devote to it, I think it would have been hilarious to have the Pontiac Bandit (Craig Robinson) there, singing [as they walk] down the aisle. 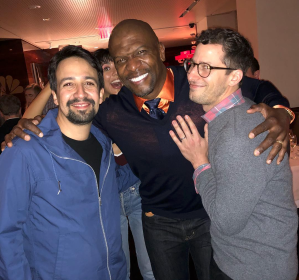 Miranda celebrated the renewal with B99‘s Andy Samberg, Terry Crews and Stephanie Beatriz at the NBC Upfronts dinner on May 13

TVLINE | A lot of big stars came out in support of the show when it was cancelled by Fox, including Lin-Manuel Miranda, Mark Hamill, Sean Astin and director Guillermo Del Toro. Has there been any talk of having them guest-star next season?
It’s early and we don’t have the writers’ room going yet, but… it would be a dream to have all of them, let alone even one of them. Having Guillermo [Del Toro] direct the Halloween episode [would be incredible], which I don’t know if we’ll have [in Season 6].

TVLINE | Any chance we’ll pick back up with Jake and Amy’s honeymoon?
I definitely think seeing some of their honeymoon seems funny. I don’t know if that means we do a flashback to it, or if we do a cold open about it, or if we do a whole episode about it… Or if it’s a series of flashbacks we see throughout the season, I don’t know. Now I’m just spitballing. [Laughs]

What did you think of Brooklyn Nine-Nine‘s Fox finale? Grade it via the following poll, then hit the comments to flesh out your thoughts (and share your hopes for Season 6).