THE PERFORMANCE | All the way back in December of 2015, Leftovers executive producer Damon Lindelof was looking forward to using Glenn in the HBO drama’s third and final season less like “a relieving pitcher” than “a starting pitcher.” And with last Sunday’s episode, it was made abundantly clear why: When the veteran actor was at last given a turn on the mound, he confidently threw a no-hitter.

Over the course of the hour, Glenn took us along with Kevin Sr. on arguably the most surreal Australian walkabout ever, sneaking onto sacred aboriginal land in the name of “preventing the apocalypse,” revealing to a tribal leader how a clairvoyant chicken had convinced him that only his own singing could forestall a Biblical flood, and railing against the God who put in his path one obstacle (a venomous snake) after another (those pesky authorities). Miraculously, not once did Glenn leave us room to doubt the sincerity of his foul-mouthed character’s out-there beliefs. He even found, along with the courage of Kevin Sr.’s convictions, the humor, cracking that, when the voices in his head had told him to go Down Under, “a little specificity would’ve been nice!”

As “Crazy Whitefella Thinking” drew to a close, Grace decided that the grizzled stranger whose life she’d saved wasn’t the angel she’d at first imagined he was. But we were just as sure that Glenn’s performance — funny and fierce, lovely and loony — was heaven-sent.

HONORABLE MENTION | Power can be one hell of a drug, as coder-turned-CEO Dinesh learned this week on Silicon Valley, and Kumail Nanjiani took full advantage of Dinesh turning into a full-blown tech-bro douche. With overly gelled hair and a smug smile, Nanjiani was riotously funny as Dinesh spouted off nonsense jargon like “mission-focused” and bragged about making a cute tech reporter laugh. But all drugs wear off eventually, and Dinesh’s ego came crashing back down to earth when he learned his video chat service was a massively illegal haven for child predators. Nanjiani showed off an admirable comedic range in portraying Dinesh’s rapid rise and fall, proving that every mild-mannered keyboard jockey has a Zuckerberg hidden inside them somewhere. 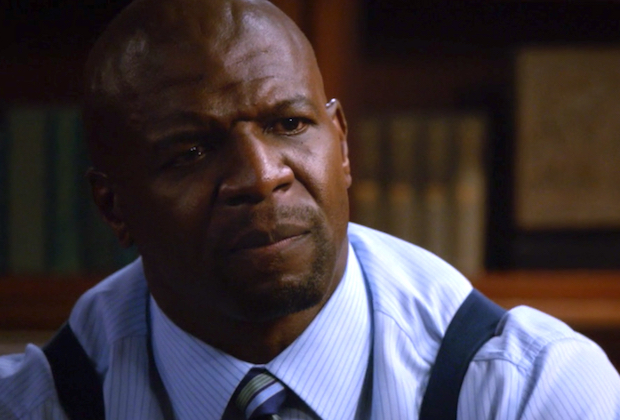 HONORABLE MENTION | An especially poignant episode of Brooklyn Nine-Nine proved to be a terrific dramatic showcase for Terry Crews, who delivered a powerful monologue not soon forgotten. As a teary eyed Sgt. Jeffords described to Capt. Holt what it felt like to be racially profiled by a fellow officer, we, too, caught ourselves welling up. “When I got stopped the other day, I wasn’t a cop,” he lamented. “I was a black man — a dangerous black man [and] that’s all he could see: a threat.” But even worse than being reduced to the color of his skin was imagining his daughters one day going through the same thing, a fear he made known as his voice began to crack. Crews’ delivery in that moment reminded us that his acting repertoire extends far beyond pec dancing.

HONORABLE MENTION | In American Crime‘s season finale, Janel Moloney‘s Raelyn likely spoke the fewest words of any major character. And yet we felt her quiet desperation all the same, as she realized she had fractured her relationships with everyone close to her. Moloney’s work was at its most moving when Raelyn and Jeanette (Felicity Huffman) attempted to talk through Raelyn’s legal predicament. The actress employed the subtlest of facial expressions — a furrowed brow here, a quivering lip there — to communicate her character’s faux-stoicism (and, ultimately, heartache) about landing herself behind bars and separated from her two daughters. When Jeanette finally left the visitation room, and Raelyn dissolved into tears, Moloney cemented her status as one of Season 3’s most underrated performers.