‘DUCKS GO DOWN, DUCKS COME UP’ | After “Crazy Whitefella Thinking” opened with an especially jazzy rendition of “Personal Jesus,” we joined Kevin Sr. as he drove to trespass on sacred aboriginal land listening to a cassette of an 8-year-old Kevin playing newscaster on their road trip to Niagara. Once Kevin Sr. reached his destination, he discreetly recorded the tribe’s song, then, when the coast was clear, painted his body to match theirs and repeated the ritual. Upon being caught by the police, he explained that he was “preventing the apocalypse” but was nonetheless arrested. As soon as Kevin Sr. was released, he picked up from the post office Matt’s book — or, as he called it, “the goddamn sequel to the Bible” — ripped out a page, folded in it $100 (maybe more) and stuck it in that infamous copy of National Geographic. Then, he proceeded to edit the book, growing angrier with every red mark he made.

Later, Kevin Sr. phoned Matt but got Mary, who didn’t want her husband to come with her and Noah to the park. “Not when you have ‘important work’ to do,” she cracked. Kevin Sr. wasn’t thrilled with Matt, either — he was furious that the book wasn’t about him but about his son. “I am not a part of Kevin Jr.’s story,” he insisted. “He’s a part of mine. He’s the one who guided me here” to Australia as a kid. When Matt asked if Kevin Sr. had received the money he’d sent, the elder Garvey questioned whether the cash was to help him out or to keep him from blabbing to Kevin about the book (since the reverend believed that, for the purposes of his Even-Newer Testament, Kevin had to keep going about his business unawares). Finally, Kevin Sr. told Matt he’d better pick up some scuba gear, because if he failed in his mission, they were all going to be under a lot of water. Just then, it began to rain, and Kevin Sr. chucked Matt’s book in a nearby garbage can. 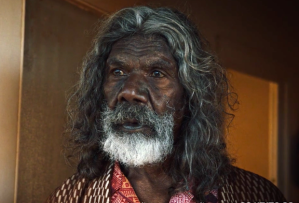 ‘IT’S GOTTA BE A F—ING SIGN’ | In search of one Christopher Sunday, Kevin Sr. paid a visit to a woman named Sharon, the liaison to the indigenous community, and charmed her into producing the address… just before she noticed a “wanted” poster on her office wall that stated that he was not to be given access to tribal elders. Before you could say, “Gotta run!” Kevin Sr. had done exactly that — right to Christopher’s door. Once there, he explained to the tribesman that, five minutes after the Sudden Departure, he’d started hearing voices, which had only stopped when he finally did what they said and went to Australia. Although, he noted, “a little specificity would’ve been nice!” Unsure of exactly where to go, Kevin Sr. headed for the Sydney Opera House, where a hippie asked if he wanted to talk to God. Next thing Kevin Sr. knew, he was waking up from a two-week hallucinogenic trip in a Perth hotel room where the TV was broadcasting the story of a chicken named Tony who could help people find what they were looking for.

BTW, yes, you absolutely can be forgiven if, at this point, you thought you, too, might have been high as a kite. Now, where were we? Ah, yes. Taking the broadcast as a sign, Kevin Sr. hopped a train cross country to see Tony and told him what he was looking for was “some f—ing purpose.” In response, the chicken jumped on Kevin Sr.’s backpack and started pecking at the tape of that Niagara road trip. Without rewinding it, Kevin Sr. pressed “play” and heard little Kevin insisting that he had to sing “Itsy Bitsy Spider” to make the rain stop. And when he had, lo and behold, the rain had stopped. So this was Kevin Sr.’s theory: On the seventh anniversary of the Sudden Departure, the rains would come, and with them, a great flood. “I have to sing to make it stop,” he conjectured. That was why, for the past two years, he’d been working his way down Australia’s song line — to learn every song, piece by piece. Chris’ song was the only one left that he needed. But, Chris explained, his song is to bring the rain, not stop it. “That’s also subject to interpretation,” Kevin Sr. said.

‘THEY DIDN’T TAKE ME’ | Shortly, Chris agreed to teach Kevin Sr. his song if Kevin Sr. would first fix the leak in his roof. Alas, they’d accomplished pretty much nothing by the time Sharon caught up with Kevin Sr. “I tried to miss you,” he insisted after falling off the roof onto the tribal elder. In the ambulance rushing Chris to the hospital, Kevin Sr. was so obnoxious that the EMT threw him out in the middle of nowhere, leaving him to walk back to town on crutches. As will happen on this show, he eventually happened upon a motorist who stopped his VW Beetle, got out and doused both it and himself with gasoline. Unhappy that “they didn’t take me,” the fellow asked Kevin Sr., “Would you kill a baby if it would cure cancer?” No, answered Kevin Sr. “That is exactly what I said,” the man agreed. And then he set himself and the car on fire. That night, Kevin Sr. yelled at God, “You can’t stop me, a–hole!” and, right on cue, it started to pour… dousing the tape recorder and the cassette of the Niagara trip.

The following day, Kevin Sr. tried to salvage the tape to no avail. Back on his way, he came across a snake. “I know you’re my totem, but I got some bad news for ya,” he informed the reptile — he was going to have to eat it. Unfortunately, after beating the snake with a crutch, it still wasn’t quite dead and bit Kevin Sr. In bad shape, he laid down beneath the kind of random cross that one finds in the Outback on this series, and was ultimately found and saved by a woman on horseback. (Guess who.) When next Kevin Sr. awakened in a lovely house with an adorable dog, he learned via a call to Matt that three weeks had gone by since last they’d talked. Outside, Kevin Sr. was informed that Chris had died by a group of people building a boat — or should we say ark? Back inside, Kevin Sr. found in the freezer not only a snack but a photo album full of pictures of Grace and her family. That night, he interrupted her and her lady friends drowning the chief of police (as we saw in “Don’t Be Ridiculous”), and was shot with a tranquilizer dart. 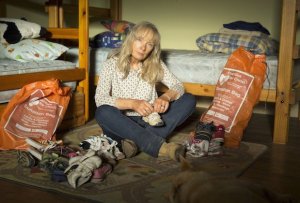 ‘IT HAD TO BE HIM’ | The next time Kevin Sr. awakened, Grace calmly admitted that she’d murdered a man the previous evening, would turn herself in the following day, and would he mind leaving the other ladies out of it? When he guessed from her photo album — and the lack of family members around — that her nearest and dearest had departed, she said that “I knew what it was the moment it happened… the Rapture.” When she arrived home that day, she found her family’s Bibles in their church all in “a nice, neat row” and felt blessed by that confirmation that they “now sat by His side.” Only two years later, remains had been found on her property — five children… her children. They’d had no way of knowing when or if she was ever coming home, or if she’d vanished like their father, so they’d set out alone on foot. “I never even considered searching for them,” she confessed. “If I had… “

Anyway, Grace had moved the cross from their church to mark the spot where the kids had died… the spot where she’d found Kevin Sr., in his hand a page from Matt’s book describing a police chief named Kevin who’d drowned, freed the dead from their pain and risen again. Sure that it was a sign — especially with a police chief named Kevin living nearby — she’d sought him out and, thinking his uncooperativeness a test of her faith, drowned him. She’d really believed Kevin Sr. had been sent by God with a message just for her. “But you’re not an angel,” she concluded, “and God doesn’t care about me.” Or maybe He did? For Kevin Sr. didn’t think she was crazy. “You just got the wrong Kevin.”

So, what did you make of “Crazy Whitefella Thinking”? Er, trippy, right?