“I think I’m going crazy,” Nora admitted in Sunday’s (as-usual) intriguing episode of The Leftovers. And by the time the hour was through, you might have felt like you were starting to lose it, too. For, although we got some big answers — about, for instance, what happened to Lily and what Mark-Linn Baker has been up to since “departing” — we were left with some even bigger questions. Such as? Read on…

‘CAN’T YOU GIVE A MAN A LITTLE GRACE?’ | As “Don’t Be Ridiculous” began, the infamous Pillar Man keeled over and fell off his perch. But the following day, his wife Sandy was insisting during her DSD interview with Nora that she’d seen him depart. By suffering all those years on the pillar, “he proved himself to God,” Sandy argued, “and last night, he got his reward” when he just “kinda faded out, like he was on a dimmer.” Tipped off to how supportive Matt had been, Nora smelled a rat and made a beeline for her brother, who marveled at Sandy’s devotion to her husband. “I’ve never seen anything like it,” he exclaimed. Only, of course, Nora knew that he had seen something quite like it — he had been just that devoted to Mary. “My heart breaks for both of you,” Nora said. But Pillar Man’s “legacy” be damned, Matt was going to have to show her where the deceased was buried so that she could disprove the departure claim by digging him up.

The next day, when John said hello while Kevin and Nora were collecting Pillar Man’s few belongings, Agent Durst couldn’t resist cracking wise about his and Matt’s Extra-New Testament. “If we can’t have a sense of humor about you being the messiah,” she glibly told Kevin, “we’re gonna have a problem.” Leaving the pillar, Nora was tempted to tell the tourists praying for “the departed” what really happened to Pillar Man. C’mon, Kevin pleaded with her. In 10 more days they’d be gone. Till then, he just needed to keep Jarden calm. From there, Nora went to the doctor’s office to have her cast removed. Before he let her go, arm right as rain, he informed her that, on the day she’d originally come in, an orderly had seen her slam her car door on her arm on purpose. Nora’s response: Why on earth would she do that? Leaving, she got a call on behalf of a third party from Mark Linn-Baker — yes, the one from Perfect Strangers who’d faked his own departure. If she wanted to see her kids again, she had 24 hours to meet him at his hotel room in St. Louis. Which didn’t sound sketchy at all, right? 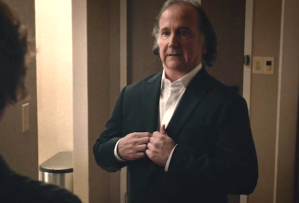 ‘TRY NOT TO WALK ON TOO MUCH WATER WHILE I’M GONE’ | When Kevin came home to change his shirt, he found Nora packing. “Sick of me already?” he asked. No, she was just going out of town on business (technically true, since her travel expenses had been OK’d by her boss at the DSD). Could she read Matt’s book on the plane? Curiously, Kevin didn’t want to let it go, since it was the only copy. “Maybe,” Nora snarked, “Matt should have gone to Kinko’s.” When Nora tried to check in at the airport, the kiosk wouldn’t let her click “no” to the question about whether she was traveling with an infant in her lap (clearly rubbing salt in the wound inflicted by Lily’s absence). No sooner had she arrived at Mark’s hotel room than he threw her cell in the toilet to ensure that she wasn’t recording their conversation. And it was a doozy!

Swiss scientists, the actor explained, had found a way to blast people to… wherever it was that people went when they departed. But, since they weren’t allowed to perform beta tests on actual people, they’d fled their country and gone mobile. Nora immediately suspected that they were just incinerating people, and wondered whether Mark was suicidal. No, he wasn’t, he insisted. It was just, after his co-stars departed and he didn’t, he wanted to “take some f—ing control.” Before leaving, Nora was given a phone on which she’d be called by the Swiss team and a flash drive full of testimonials (which she couldn’t resist checking out). Before returning to Jarden, Nora — in spite of her GPS not working (more electronic snafus!) — took a detour to Kentucky to see… aww… Lily, who didn’t know who she was. Caught talking to the little girl she’d adopted by birth mom Christine, Nora made up an excuse for her presence and, shattered, beat a hasty retreat. 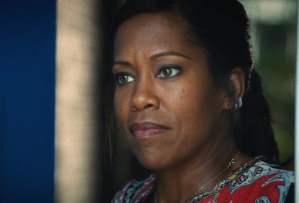 ‘NOBODY HAS TO WORRY ABOUT ME’ | After Nora landed back in Texas, the parking-lot meter wouldn’t accept her ticket (yet another strange malfunction), leaving her to yell at the travelers honking behind her and angrily raise the gate herself. Rather than go straight home, Nora went to see Erika, who could tell at once that she needed a hug and a beer. At first, Nora lied that she’d broken her arm because she was a klutz. She’d even broken her leg right after the Sudden Departure. When the newspaper had run a picture of her on crutches, the headline had called her “Nora Cursed.” Finally, she admitted that she’d broken her arm to “cover something up” — a tattoo of the logo for the “Wu-Tang Band” (ha). Though she really did have the tattoo, Erika knew that wasn’t the real story, certainly not the whole one. So at last Nora tearfully confessed that one day she’d gotten her kids’ names tattooed on her arm, then realized that people would ask about it every time they saw it, so she’d picked the first tat she saw on the wall of the tattoo parlor to cover it up. Fearful that she was going insane, Nora asked how Erika wasn’t. “Evie died,” her friend answered, “and I got to bury her.”

After some trampoline therapy with Erika, Nora was on her way home when Tom pulled her over. Not to ticket her, mind you, but because Christine had called him afraid that she was going to become an issue. All Nora could say to that was, when Lily’s birth mom had sued for custody, she hadn’t fought, she’d just given back the baby she so dearly loved. Tom tried to comfort Nora by revealing that he wished Laurie and Kevin had never told him he was adopted. It did not comfort her. Did he know what she wished? “I wish you’d never left her for me,” she said. To which Tom replied that he hadn’t, he’d left Lily for his dad and hadn’t even known at the time that Nora existed. OK, then. Her bad day growing ever worse, Nora worked out a little of her frustration by blowing up a picture of Pillar Man, his head bashed from his fall, and slapping it up in front of the angelic portrait of him that had been erected beneath his perch. When she eventually made her way home, she found Kevin asphyxiating himself. “I tear it off every time,” he stammered. “I don’t want to die.” It’s fine, she assured her lover. After showing him her tat (without explaining its heartbreaking backstory), she burst into laughter when he suggested they have a baby. No, he was happy (really?), she was happy (yeah, no)… “Let’s not f— that up,” she said. “OK?” 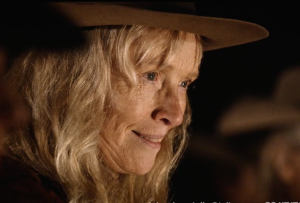 ‘WE KNOW WHO YOU ARE’ | Just then, Nora got the call that if she wanted to get blasted to… wherever her family was… she had to be in Melbourne, Australia, on Tuesday with $20k. Could she make it? Looking at Kevin, she answered yes, then told her significant other that she had to head Down Under for work. “Can I come with you?” he asked. To (at least) my surprise, she said yes. Meanwhile, in Oz, another police chief named Kevin — not a lookalike a la Nora/Sarah — was abducted by four women on horseback who seemed to think he was Kevin Garvey. Which did not bode well at all for Kevin Garvey, because the women — led by Grace (Lindsay Duncan) — subsequently drowned this fellow with the expectation that he’d rise from the dead. Just as they realized he wasn’t coming back, out of a nearby house came Kevin Sr. “What are you ladies up to?” he asked. Good question.

What did you think of “Don’t Be Ridiculous”? Were you surprised to learn that Kevin and Nora hadn’t fought for Lily? Are the Swiss are legit? Do you think Kevin is Jesus? Hit the comments.