In “He Said, She Said,” the sergeant (played by Melissa Fumero) revealed to Jake (Andy Samberg) that her former captain at the Six-Four crossed a line when she was just a rookie. “He helped me get on the detective track, and he gave me all the best cases,” she said. “When I finally made detective, he took me out to dinner and tried to kiss me. He said he felt like he deserved something in return for my career.”

Amy never reported her captain. Instead, she put in her transfer to the Nine-Nine. She was made to feel like she didn’t actually deserve her promotion, and feared that it would jeopardize her career if she ever spoke out. 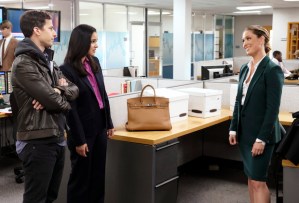 Years later, Jake and Amy investigate a similar abuse of power. Wall Street investment banker Seth Haggerty is accused of getting drunk and inviting up-and-coming investor Carrie Brennan (Great News‘ Briga Heelan) into his office. There, he pushed her up against his desk and tried to undress her against her will.

When Carrie comes in for questioning, she assumes that the only way forward is to sign a non-disclosure agreement and accept the firm’s $2.5 million offer to “let it slide,” but Amy convinces Carrie to hold off while they pursue the case. Charges are eventually pressed when another employee comes forward with a text message from Seth that details the encounter, just as Carrie reported it.

Unfortunately, speaking out costs Carrie her future at the firm. She quits when it becomes clear that no one’s willing to work with her anymore. The good news is that her decision to report Seth inspires a fellow female coworker to report an assault of her own.

Below, Beatriz and Fumero weigh on the importance of B99‘s #MeToo episode and the discussion they hope it inspires.

TVLINE | Stephanie, as a first-time director, what was it like tackling this episode in particular, given the subject matter?
BEATRIZ | The topic of #MeToo is a difficult and complex [one], and I think having a female perspective — a female writer [Lang Fisher] and a female director — was necessary to create an environment where these actors felt like they were able to explore this topic in a really honest, sincere and still-funny way.

TVLINE | Melissa, were you clued in ahead of time about Amy’s #MeToo moment?
FUMERO | No, I read it with the rest of the cast at the table read and I got really emotional saying the words out loud. I thought Lang just nailed it, and I felt so safe and protected going into it knowing that my friend was going to be behind the camera directing… The episode brought up a lot for me and my own personal experiences, and of every woman that I know, which is really why this movement is so important. Every woman shouldn’t have a story, [but] unfortunately they do. 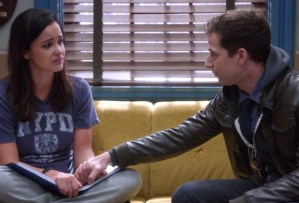 TVLINE | The scene where Amy reveals to Jake what happened with her former captain was really emotional. What was it like for you to shoot that scene?
FUMERO | The actor part of me was excited… on an artistic and professional level. Then as I mentioned before, that scene just brought up things so personal to me and the fact that pretty much every woman I know has a story, so there was weight to that. It was a little daunting, thinking, “We need to get this scene right,” because this was one of those scenes where I read it on the page and instantly related to it. You want to make sure that it translates… And then just sharing that experience with Andy, with Stephanie behind the camera… I’ll remember shooting that scene forever.

TVLINE | Stephanie, did you also feel the pressure behind the camera to get that scene exactly right?
BEATRIZ | It definitely was one of the most important scenes. I think you, as an audience member, have to understand how this thing really affects these two people, particularly Amy and her view of herself. Not to get too deep about it, but sexual assault in any shape or form, so much of it is about power and taking power away from the person that it happens to. It destabilizes their sense of self-worth and their place in the world… It was so important to me to create this space where you get to see this character be really vulnerable — not only vulnerable with her partner, but also with us, the audience… We’ve known this character now for five-and-a-half seasons — we know her, we like her, we respect her and we think she’s amazing — and to hear her talk in this way gives you this whole other layer of what this person is about. That was pivotal to the episode. It was also important for me to frame it in a way that makes this thing that we’re talking about not just about a thing that Amy is feeling, but this couple and how these two people are feeling and exploring this thing together. 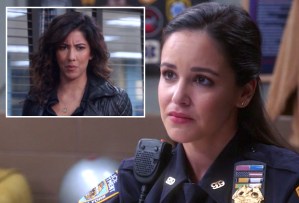 TVLINE | At one point, Rosa and Amy discuss whether Amy did the right thing convincing Carrie not to sign the NDA and take the hush money. Was it important to you to have this argument in the episode, to show that you can be on the same side and still have a difference of opinion?
FUMERO | One-hundred percent. That was the other big scene in the episode to me. When I read it, I said, “This is so good,” because this is the conversation that I think people are having everywhere.
BEATRIZ | I think that’s the conversation that sometimes people don’t want to hear… I know so many people in my life that have dealt with something like this and have chosen not to come forward and talk about it, because they don’t want to be reduced to just that story. They don’t want that story to eclipse everything else that they’ve worked so hard for in their career. I think that’s the thing that gets lost when you’re having these very loud voices say, “Well, why didn’t she come forward sooner?” “Why didn’t she tell her story sooner?” “Why didn’t she report it to the police?” It’s very easy to look back and say it’s this person’s fault because they didn’t speak about it, and this is a very well-written scene in which two women — two women — talk about this and say, “Here are the pros and cons and this is my perspective on it.”

TVLINE | What do you hope viewers take away from this episode?
BEATRIZ | I’m hopeful that [there will be] a continued conversation in people’s lives that are watching this show, whether it’s a family watching together, or it’s teenagers watching it on their phones and then talking about it on social media… If you haven’t had anyone close to you have an experience that can be defined with the #MeToo hashtag, now you have because you know Amy. You know her, you know her quirks and what she’s good at, and now you know her on a deeper level. Audiences connect to these characters because they invite them into their homes, into their most private spaces, and now you’ve got a character that you’ve invited into your most private space that is dealing with something like this.
FUMERO | My biggest hope for this episode is that people find more empathy for these stories, and realize that maybe they’ve been too quick to judge in the past. As Stephanie said, someone that they “know” has had an experience.

What did you think of Brooklyn Nine-Nine‘s #MeToo episode? Grade it via the following poll, then flesh out your thoughts in the comments.