Amber Ruffin exudes Big Capricorn Energy. Ambitious, tenacious and undeniably talented, the zany comedian — whose birthday is Jan. 9 — is carving her own path in a field that’s hard-pressed to give Black women their proper due.

As host of Peacock’s The Amber Ruffin Show, which has been nominated for a Writers Guild Award for Comedy/Variety Sketch Series, she’s the only Black woman with a late-night show currently on the air. Her infectious charm and sharp social commentary make her a TV fixture, so much so that NBC is testing her show out with a broadcast audience. The network will air two episodes (tonight, Feb. 26 and Friday, March 5 at 1:30 a.m.) in place of repeats of A Little Late With Lilly Singh — a move that Ruffin hopes will make Black viewers feel seen and “realize that late-night comedy is an option for them,” according to her statement to The Root.

Moving through a space that’s dominated by white men requires a certain level of confidence, which Ruffin has in spades. In 2014, she flew out to New York to audition for Saturday Night Live alongside the likes of Leslie Jones, Tiffany Haddish and Nicole Byer. It was a dream gig that the comedian was certain she was going to get — until she didn’t. “I still cannot explain what on earth made me think that I was guaranteed such a thing,” Ruffin recalls with a chuckle.

Her disappointment, however, lasted only a few days. Seth Meyers soon called her up with an offer to write for Late Night — a role she still currently holds — making her the first Black woman to join the writers’ room of a late-night network show. Ruffin’s searing political and social satire, like her “Amber Says What” segments, have become her signature, but it took years for Ruffin to reach the level of comfort to say exactly what’s on her mind. Ruffin attributes this to a drastic cultural shift amid the rise of the Black Lives Matter movement, which began in 2013 following George Zimmerman’s acquittal after stalking and shooting Trayvon Martin and gained newfound mainstream attention after nationwide protests for the recent killings of George Floyd and Breonna Taylor. 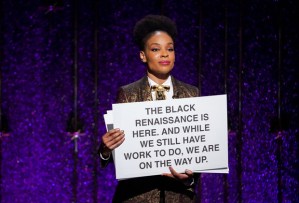 “I think the world shifted a little bit. I feel like I was riding the wave of a totally different American consciousness,” she explains. “It’s truly changed, what is OK to say and what isn’t, because we’re not trying to protect white fragility anymore. That’s not a part of anything, which is crazy, because that used to be a big chunk of what you do. To not be like, ‘Well, you know, everything we learned is a lie’ to make white people feel less guilty.”

In a powerful Late Night segment that ran last June, Ruffin shared her personal run-ins with police for a week straight. The rare experience of being given the space to speak so freely made her realize just how much she’d been holding back over the years. “When you are the only Black person at a comedy show or part of a cast, you just act that way to keep yourself safe and so that no one says anything crazy to you. As those boundaries break, it is kind of shocking [to see] how much you were playing by this weird rule that ultimately never mattered,” she says.

The strides Ruffin has made so far come on the backs of those who came before. Whoopi Goldberg made history in 1992 as the first Black woman to helm a late-night show, which only lasted for one season. A decade and a half later, Wanda Sykes landed her own late-night show on Fox, but that, too, was cancelled after the first season. Robin Thede helmed BET’s The Rundown in 2017, which also wasn’t renewed, but led to her creating 2019’s A Black Lady Sketch Show in response to the dearth of Black women in the comedy space. Season 2 is currently in the works without Ruffin, who is busy pulling double-duty writing for Late Night and hosting her show.

As a writer for A Black Lady Sketch Show, Ruffin found herself surrounded by women who looked like her for the first time in her career. The series featured a writers’ room made up entirely of Black women including Ruffin, Thede, head writer Lauren Ashley Smith (The Rundown), Ashley Nicole Black (Full Frontal With Samantha Bee), Rae Sanni (The Good Place), Akilah Green (Chelsea), Holly Walker (The Nightly Show) and Brittani Nichols (Take My Wife). Though she worked remotely from New York, Ruffin enjoyed the unique reassurance that came with working on a staff in which she wasn’t the minority.

“It was weird turning my work in to a Black woman who’s gonna discuss it with another Black woman, and they’re in charge of whether it goes or not,” she says of the experience. “Just that thought is crazy to me, and then the fact that it’s crazy feels even crazier, but it was really cool. I remember feeling very encouraged from that show, and that room.”

Ruffin’s work can be seen throughout A Black Lady Sketch Show‘s six-episode first season, which featured memorable sketches like “Bad B—ch Support Group” and “The Basic Ball.” The experience left a lasting mark on the late-night host, who made sure her that own writers’ room would also be majority Black. The Amber Ruffin Show, which premiered on Sept. 25, boasts a 90 percent Black writers’ room made up of head writer and Late Night cohort Jenny Hagel, Demi Adejuyigbe, Shantira Jackson, Dewayne Perkins and The Root journalist Michael Harriot. Much like A Black Lady Sketch Show, Ruffin’s staff operates with the freedom to say things exactly the way they’d normally articulate, rather than having to code switch to get their point across. 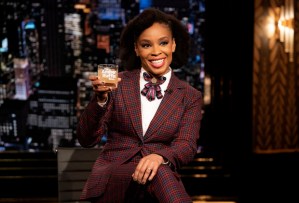 “If you’re a Black writer on a white show, it’s kind of like you are wearing weights around your ankles,” she notes. “What first occurs to you has to be filtered through the white gaze and white understanding, so you can’t be talking about Babyface and s–t. You have to be like, ‘Clay Aiken.’ You have to go with your third thought, and that happens a lot, and sometimes you have to correct how you would say something and whiten up your language. But on our show, we don’t have to do that, and it’s so cool.”

Ruffin has been in the game long enough to recognize the drastic change in comedy, shaped by the rise of social media services like Twitter, Instagram and TikTok. These platforms have given comedians unprecedented access to a worldwide audience and the ability to create opportunities for themselves that would otherwise be totally out of reach. For example, Lisa Beasley’s spot-on Margaret Thatcher impression in her parody of The Crown and Ryan Ken’s brilliant Malcom & Marie sketch have garnered millions of views, while TikTok superstar Sarah Cooper booked a Netflix special off her wildly popular Trump lip-sync videos.

Ruffin is excited to see this new generation of comedians ascend, recognizing that they’ve altered not just how we access entertainment, but also the type of comedy that we consume. “What comedy is evolves, and it’s growing at a crazy fast rate. I remember when it was Adam Sandler and Adam Sandler-esque jokes and movies — which I love — that were everyone’s favorite for years and years. But now, comedy moves at such a fast pace that that schtick can’t hold three movies, let alone the 10 or whatever,” she says.

With a successful late-night show, a New York Times bestseller (she and her big sister Lacey Lamar released You’ll Never Believe What Happened to Lacey: Crazy Stories of Racism in January) and a few game-changing milestones under her belt, the quick-witted jokester from Omaha, Nebraska is already etching out a memorable legacy. Through her triumphs and not-so-triumphant moments, she’s learned the value in remaining unapologetically herself.

“I have learned how to be tough,” Ruffin concludes. “When you write on a late-night show, you have to pitch a million jokes and a million sketches every week, and you’re lucky if one of them makes it. I’ve learned to not be precious about material at all. Once you start seeing yourself as not a comedy writer but like a comedy fountain that will never stop flowing, then you really feel powerful.”