Billie Holiday didn’t particularly enjoy singing “Strange Fruit,” a chilling anti-lynching anthem that compared Black bodies to fruit hanging from a tree, but she knew it was too important to not be performed.

The song, which earned the sympathy of her Black and white patrons, made her a threat to the FBI and marked the early beginnings of the Civil Rights movement, serves as the centerpiece of Lee Daniels’ forthcoming The United States vs. Billie Holiday.

Set to premiere this Friday, Feb. 26 on Hulu, the film follows the legendary jazz singer’s courageous resolve to perform the provocative piece as the FBI made every effort to silence her — like stripping her of her license to perform in jazz bars — under the pretense of a war on drugs (the singer also battled drug addiction). Daniels, who admitted that he had no idea the government went after Holiday for singing “Strange Fruit” before reading Suzan-Lori Parks’ script, says he felt compelled to spotlight this crucial period of her life on screen.

“The government has succeeded all these years not to tell our true stories,” he tells TVLine. “I had to bring it to light.”

An all-star cast has assembled to bring the singer’s story to life, including “Rise Up” singer Andra Day in the titular role; Trevante Rhodes as Jimmy Fletcher, the undercover FBI agent who embeds himself in Holiday’s life; Natasha Lyonne as Holiday’s alleged lover Tallulah Bankhead; Garrett Hedlund as Harry Anslinger, the head of the Federal Bureau of Narcotics who wages war against Holiday; and Leslie Jordan as Reginald Lord Devine, a journalist interviewing her about “Strange Fruit.”

In an interview with TVLine, Daniels opens up about tackling Holiday’s tumultuous life, what this film says about her legacy, and why he finds no comfort in the success he’s achieved so far.

TVLINE | Did you feel an added importance to getting Billie Holiday’s story right and told to as many people as possible?
It’s terrifying, which is one of the reasons why I was excited about working with Andra Day. She was as terrified in making sure that we got the story right as I was. Not all of it is accurate — we made up Jimmy Fletcher’s storyline with his mom [because] we couldn’t find out what his parents did. But [her] story is so powerful and so sad. It just made me realize she’s a Civil Rights leader. She kicked off that movement as we know it to be. 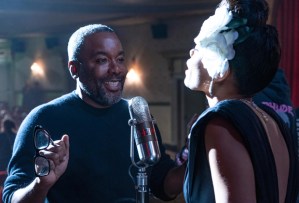 TVLINE | What did “Strange Fruit” mean to you when you first heard the song, and how did your impression of it change once you started working on this film?
I heard it for the first time when I was a teenager watching Lady Sings the Blues [starring Diana Ross as Billie Holiday], and I didn’t really understand what it was about. I didn’t connect it with lynching at all. It wasn’t until I began production on this film that I understood the lyrics and had a brand new understanding of Billie Holiday and the power of what that song was about.

TVLINE | What was it like working with Andra Day on capturing Billie’s essence on film?
It was mesmerizing. I think it was a once-in-a-lifetime experience. I’d never encountered someone that… It was God’s work that inhabited her. She became Billie in a way that I haven’t seen with other actors.

TVLINE | This film takes a no-holds-barred approach to Holiday’s story. Were you ever nervous about diving into the darker moments of her life that are portrayed in this film?
Sadly, we had to. [You can’t really do this] without leaning into all facets of Billie’s life. Oftentimes, as a Black filmmaker, we want to paint our heroes in a specific light. We want them [to be] perfect. For me, her imperfection is what made her perfect and I think that we don’t see complex characters like that up on the screen. Especially as Black people, we don’t see that, but that’s who we are.

TVLINE | I remember an interview with Wayne Brady who, while discussing playing a villain in Black Lightning, touched on the important of portraying multifaceted Black characters — the good and the bad.
Oftentimes Black people don’t want to see a bad side of us, but I don’t think we’re going to grow and really get back our country and do the things that we need to do unless we can embrace our wholeness.

TVLINE | What do you think this film says about Billie’s legacy, and what do you want people to take away from it after watching?
I think that it says that she was not just a troubled jazz singer, as the media and the government have painted her out to be, but rather she was the godmother of the Civil Rights Movement. It’s great that I’m able to tell the story of this fearless woman, and I think the takeaway is that if Billie Holiday could do what she did during that time period, then we could do a lot more.

TVLINE | This film touches on the anti-lynching bill in the ’30s that never passed, and a new bill introduced in 2019 that also has yet to be passed into law. What do you think that says about the progress we’ve made so far?
Until that bill is passed, we ain’t made no progress at all. That we’re even in this conversation is crazy. That wasn’t in the script. We didn’t know until we were three-quarters of the way through shooting about the lynching laws, and it’s hard. People say that this movie is timely — of course it’s timely. It was timely 20, 40 years ago, and it’s going to be timely 20, 40 years from now until America does the work to heal this ugly sore that festers.

TVLINE | What does that work look like, in your opinion?
It means that we have to understand, Black people and white, what systemic racism is. There’s much learning to be done. 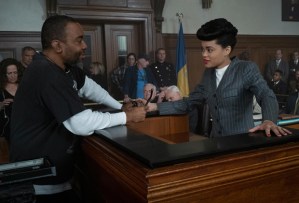 TVLINE | And there’s much learning to be done outside of social media. I know I can do better at that, too.
I’m learning more every day, things that I thought I understood about racism. I pretended for such a long time that I just couldn’t acknowledge that it was affecting me. I put blinders on because if I dared to look at it, I don’t know that I would be where I’m at right now. If I had thought that people didn’t like me because I was Black, that the system was stacked against me, if I walked in with that sort of [mentality]… it’s a hard reality.

TVLINE | At what point in your career did you make that realization?
I think during Empire is when I realized that we had something as a culture to give back, we had something strong and powerful. I was surprised even at myself at the amount of viewership that we had. I can look back on it now and say that it shifted the culture. I don’t think there wouldn’t be a Black Panther or Insecure or any of those shows, had White America — and the world, really — not seen what it is that we do when we are on. Those numbers are through the roof, and that hadn’t been seen before.

TVLINE | Yeah, Empire was a cultural shift.
I’m so busy working that I don’t really think about making history. I just tried to make sure Cookie’s hat was on right.

TVLINE | Sometimes it’s important to stop and look back at your accomplishments.
I come from poverty. I’m still afraid that I’ll wake up and it’s all gone. I want to make sure that my kids are taken care of so I don’t think about it. I’m just doing the work. You don’t think about fighting… I remember having to fight for John Singleton to direct an episode of Empire. There are all these roadblocks that are put in front of us: “Well, he hasn’t done television before” or “This person isn’t in the union” and “This person hasn’t written any television before.” All this stuff is there, but I was ready to fight, and I take for granted that I was fighting all the way because it’s been all my life. It has been a miracle because no studios have done [my] films. They’ve each been independently financed. Nobody believed in me or the stories that I was trying to tell. And oftentimes, my people don’t even believe in me or the story that I’m trying to tell. I get a lot of heat that they’re controversial, if you will, according to people.