Malcolm Spellman is a name you’ll see over and over in 2021. The multitalented producer and writer is marking his Hollywood territory with a deluge of high profile projects due out this year.

Spellman’s packed calendar is a stark contrast to the first decade-and-a-half of his career, in which the Bay Area native struggled to find work amid rampant racial bias throughout the entertainment industry. “For the first 15 years of my career, I couldn’t mount consistent work,” Spellman tells TVLine. “Executives would say out loud, ‘You can’t have a Black lead in this project because it won’t sell overseas.’” 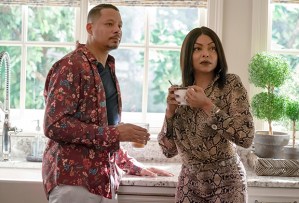 When he signed on as a writer and executive producer for Empire, which premiered in January 2015 on Fox, Spellman saw firsthand the massive shift towards Black storytelling that  executives previously told him wasn’t possible. The groundbreaking drama drew instant success as one of the most watched shows on broadcast TV, breaking a 23-year record for increased week-to-week viewership over the first five episodes. Riding a tidal wave that began with Shonda Rhimes and Kenya Barris, who found unprecedented success at ABC, the series proved that unapologetically Black stories could be a financial draw.

“[Empire] just transformed everything,” says Spellman, who worked on the show’s first three seasons. Following Empire’s impressive six-season run (which wrapped in April 2020), the TV landscape had already shifted dramatically as shows such as Insecure, Bob Hearts Abishola, Watchmen, I May Destroy You and Lovecraft Country also achieved mainstream prosperity.

Falcon and the Winter Soldier is due to launch in March, meaning that Spellman will soon embark on his largest-scaled outing yet. The adventure series follows the mismatched duo of Sam Wilson (played by Mackie) and Bucky Barnes (Stan) as they navigate a post-Endgame world without Steve Rogers’ Captain America. With Sam, who is Black, contemplating taking up Cap’s mantle, the series will delve into real issues surrounding identity, and race will be a key part of that story.

Spellman hopes the show will have a positive impact on Black youth, similar to how 2018’s Black Panther affected his nephew, who takes pride in wearing his T’challa costume every day.

“When you start to see the direct impact that a Black superhero had on my nephew, that’s branded on my brain,” Spellman notes. “I believe that Falcon and the Winter Soldier is a nice progression with the mantle that [Black Panther director Ryan] Coogler and Chadwick [Boseman] left us. I really do believe that these giant Black icons are necessary, not only for Black kids, but for white kids to start to absorb — our people as being big and heroic.” 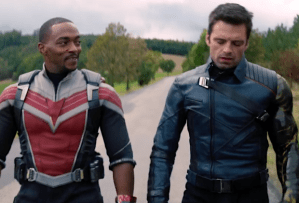 Spellman, who grew up on comic books, nearly fumbled the opportunity to be a part of the massive Marvel project. He fought hard for the highly competitive job and was among the select group of writers chosen to develop their pitch with a Marvel executive. Spellman paired up with Nate Moore, VP of Production and Development at Marvel Studios, to develop his version of Falcon and the Winter Soldier. When it came time to sell his idea to Marvel Studios head Kevin Feige, however, he suffered one of his chronic migraines and messed up on the final pitch. Though the meeting with Fiege did not go well, Spellman landed the job after Moore, who believed in what the ambitious writer had to say, advocated for him behind the scenes.

“He heard what I wanted to do, that I wanted [race] to be part of the story very prominently, and I think he knew it was right,” Spellman says of the Black executive.

Like Moore, Spellman is doing his part to champion other writers with a unique perspective. He and his wife Nichelle Tramble Spellman (a writer and EP on Truth Be Told and The Good Wife) founded The 51, a production company named after the bus line that runs through the East Bay area and their respective hometowns of Berkeley and Alameda. The company serves as a creative collective for a diverse crop of writers to hone their craft in the five-day per week writers’ room. Now in a position they never envisioned was possible for themselves, Spellman and Tramble are paying it forward by seeking out young writers who also have something to say.

“Our specific goal now is to start directly reaching out to young, creative people that are not on the pathway to Hollywood such as [not attending] college. Me and Nichelle never ever imagined we would get a chance to work in Hollywood and so, we really want to directly reach back and start to work with filmmakers who are in that same bubble where there’s a ton of untapped genius that never gets access,” Spellman explains.

It’s been nearly two decades since Spellman moved to Los Angeles to pursue the dream he’d held since childhood. As a Black creator in an ever-exclusionary industry, he’s picked up a few valuable lessons from the many challenges thrown his way over the years.

“I think one of the most important things is the faith I have that there are no limitations to the size of specifically Black stories. They can be as big as anyone else’s,” he shares. “We learned that with Empire, we learned it with Black Panther [and] we’re going to see that with Falcon and the Winter Soldier. There’s just zero argument against that anymore.

“It was really empowering,” he adds, “after hearing for the first 15 years of my career that being Black meant you had to only do niche things that were really small, to see all Black filmmakers and be one of them to be involved with projects that just appealed across every spectrum while remaining decidedly Black. That’s probably one of the best things about the path we took to get here.”