The sitcom (airing Mondays at 8:30/7:30c) is the first broadcast network show centered around a Nigerian family. It follows Bob (Billy Gardell), a sock businessman, who falls for his nurse Abishola (Folake Olowofoyeku) while recovering from a heart attack. Their unexpected love story mirrors the fortuitous chain of events that brought Yashere to the series.

Co-creator Chuck Lorre, the man behind hit shows like Two and a Half Men and The Big Bang Theory, knew he wanted to make a series about a Nigerian family, but needed someone who could bring authenticity to the potential show. After Googling “female Nigerian comic,” he found Yashere and flew the burgeoning comedian in for a meeting. Yashere, who made a splash in comedy with several Netflix specials and a Daily Show appearance under her belt, was baffled at the unconventional way in which Lorre discovered her.

Yashere had been called in to consult for the series, a role she was ready to turn down out of fear that it was exploitative. “It’s like these three white guys — are they just trying to rape the culture and put out some bulls–t? I don’t want my name attached to it, and I don’t want to be taken advantage of, so I was sizing them up, and they were sizing me up,” Yashere says. 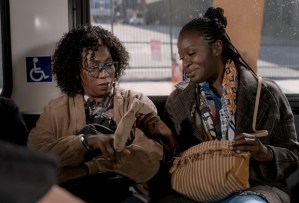 It wasn’t until she actually sat down with Lorre, who was receptive to her ideas, that she realized his true intent was just to make a really good show. The meeting also changed Lorre’s mind about Yashere’s role with the series. The mega producer initially asked her to be a consultant as a way of gauging whether or not he could tolerate being in the same room with her for more than a day. After the meeting, Lorre immediately hit up her agent with a counter-offer: Yashere would be co-creator, executive producer and writer for Bob Hearts Abishola. (She also co-stars as Abishola’s best friend Kemi.)

It may have been her first time creating a series, but Yashere says she wasn’t at all fearful of her new role and took to it “like a duck to water.” Empowered by her promotion, the genial entertainer also made it clear that she wanted at least half of the cast to be Black, and that the series would have Black writers attached. CBS has been heavily criticized for its lack of diversity both on screen and behind the scenes — the network recently announced a new initiative to commit at least 25% of its budgets to BIPOC creators for the 2021-2022 season — and Yashere looked to make her series more inclusive.

“I said to them, ‘Look, you discovered me. I’m not the only me out there. You’ve given me a fantastic opportunity, and I’d like to turn around and give back, bring in other people and give them the opportunity to succeed in this arena,'” the comedian says.

Rather than throw out a list of names, Yashere invited Lorre to comedy clubs she was headlining and added her friends to the lineup. The clever move led to fellow comedians like Gloria Bigelow and Ibet Inyag joining Yashere in the writers’ room.

Now airing its second season, Bob Hearts Abishola is a story of success. It has found a steady home in CBS’ Monday night lineup alongside The Neighborhood, All Rise and Bull, and proved that America — especially white America — could embrace a show about Nigerians being authentically themselves. For Yashere, the idea that a major network would give a show like this a shot felt out of reach for years.

“Before Bob Hearts Abishola, I was out there pitching shows about my culture and my upbringing and my family, and nobody was interested,” she says. “Now it’s opened doors because now everybody’s looking at our show and going, ‘Oh, we can do shows like this and they can be successful, and all of America can enjoy the show.’ It doesn’t have to be just Black people or just Nigerians. Everybody can enjoy the show for what it is, which is a great show.”

From Tubi’s educational animated series Bino and Fino to Netflix’s riveting romantic drama Fifty: The Series, Hollywood is finally embracing Nigerian stories like never before. Progress is also being made behind the scenes with creators like Insecure‘s Yvonne Orji, who made a splash with her HBO special Momma, I Made It and is developing a series based on her life for Disney+. Yashere, who is good friends with Orji and was originally asked to play her mom in the series before it reached Disney, is glad to see others like her finally reach their come-up after years of grinding away. 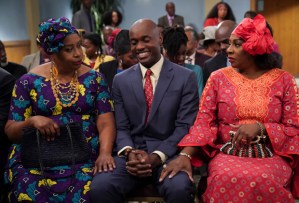 Now at a place where she can comfortably say no to projects she is either too busy for or not interested in, the TV producer has some wise words for those who wish to follow in her footsteps: “Keep hustling, and do not let the people who are considered [the ones who] control things in the industry tell you what you can and can’t do. Doors have been shut in my face and I’m like, ‘Fine. I’m going to carve my own door.'”

That meant putting together her own comedy specials, like 2008’s Gina Yashere: Skinny B—h, before Netflix and Showtime were knocking at her door. She booked the theaters, sold the tickets and hired her own team including a producer, director and camera crew so that when it came time to sell, she owned the rights to all of her materials. It all goes back to Yashere’s mantra of making things happen rather than waiting around for success to come to her.

“I’ve always been like, just do it for yourself. Don’t wait for those in power to validate you. Do your own thing. Make your own way,” she adds.

Yashere admits that it hasn’t been an easy journey. She’s faced her fair share of critics trying to silence her voice, but through it all, the Bob Hearts Abishola showrunner has remained true to herself.

“I’ve always been a little bit outspoken,” she says. “I’ve been told by people in the past, ‘Why don’t you just put your head down and keep your mouth shut?’ But I don’t regret it because at the end of the day, I’m unapologetically me, and I make it on my own terms. I’ve always been true to myself. It’s taken longer, but it’s a lot more satisfying.”