Question: Why haven’t we heard anything about Tina Majorino joining the upcoming Veronica Mars revival? Should we be worried about not seeing Mac? —Jordan
Ausiello: Word around Neptune is that The Powers That Be are interested in bringing Mac back into the fold, but, at this point, they haven’t been able to work it out. But I hear they are still trying. 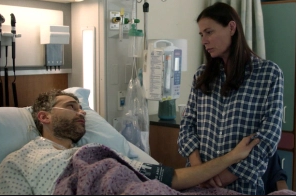 Question: With Helen getting a new boyfriend on The Affair, what does that mean for Omar Metwally (Vik)? Is he joining Season 5’s mass exodus? —Tommy
Ausiello: I can confirm that Metwally will not be back as a series regular for the Showtime drama’s fifth and final season, but I’m told there’s a chance he could make a guest appearance or two. If he does, it would seem to portend a short time jump between seasons since terminal cancer-stricken Vik was nearing the end of his life.

Question: Got any Riverdale scoop? —Miranda
Ausiello: I do have some fresh intel on Jughead’s long-lost mom Gladys, set to be played by Gina Gershon later this season. Does her arrival mean the end of F.P. and Alice’s torrid romance? “When you bring a character like that in, it’s usually to cause problems,” showrunner Roberto Aguirre-Sacasa admits. “What’s nice about Gina is, she has sort of an innate warmth to her. Even if she’s doing terrible things, you kind of love her.” Yikes… watch your back, Alice.

Question: Is there any word on God or Amara returning to Supernatural this season? With Michael on the loose, it seems prime for their return. —Thomas
Ausiello: “Going back to Season 5 of the show, the whole plan for staging an apocalypse was to get God to come back,” EP Andrew Dabb notes. “And I don’t know that Michael’s necessarily abandoned that idea, although on his previous world, he staged an apocalypse, killed Lucifer… he did everything you should have done to make God take notice; and God didn’t care.” 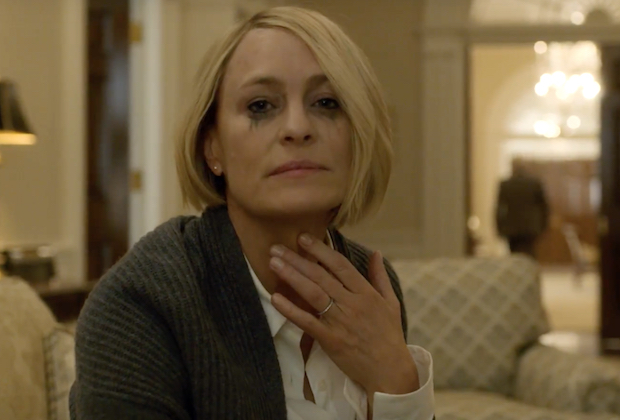 Question: I have a nagging House of Cards final-season question. [Editor’s Note: Big Spoiler Ahead] Was that Paul Sparks playing Tom Yates’ corpse in that scene in the van? —Michelle
Ausiello: It sure was. Also, if you’re wondering how and where VP Usher was storing the Claire-loving author’s body all this time, allow co-showrunner Frank Pugliese to explain: “We had done research on cryogenics and there seems to be facilities and places that can preserve a body over a long period of time. And, in the world of the show, it made sense that Usher and some other characters would hold on to the body so they can use it against Claire when they needed to. And, of course, it’s within the rules for Claire to reverse that and use it against them.”

Question: Anything on Outlander? —Mariel
Ausiello: As you might’ve inferred from our exclusive sneak peek, the Frasers’ visit to Jamie’s aunt’s plantation gets off to a rough start… and then things go way bloodyunsettling disturbing downhill from there. But take heart: Episodes 5 and 6 introduce some old faces into Jamie and Claire’s experiences in the New World.

Question: Any word on ABC’s Take Two? Has it been quietly cancelled? —Jordan
Ausiello: ABC maintains that an official decision about the summer series’ fate has not been made. (To track Take Two‘s renewal status, keep tabs on our 2019 Renewal Scorecard.) 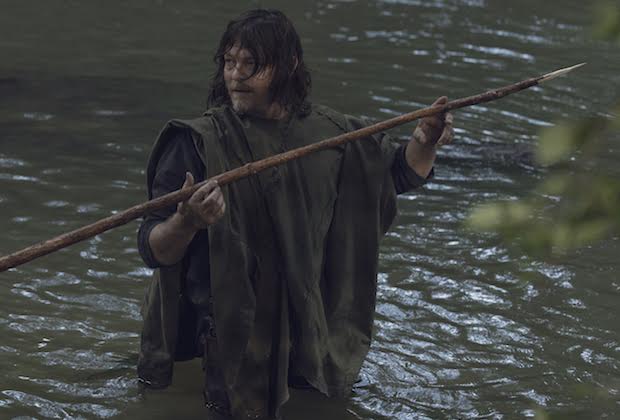 Question: Give me a reason to stick with The Walking Dead. Or don’t. That’s OK, too. —Kirk
Ausiello: Whether this will motivate you to tune in or out, Sunday’s “Who Are You Now?” — the first episode of the post-Rick era — makes it clear who will be filling the Carl void going forward, reveals a new romance (but still not for poor Daryl!) and serves just desserts to a baddie who’s long had ’em coming. It also includes a moment that would’ve been downright chilling, had it not been spoiled by the promo that followed “What Comes After.”

Question: Anything on American Gods? —Jose
Ausiello: Readers of Neil Gaiman’s novel will remember that Shadow flashes back to scenes from his youth, including his mother’s death from a terminal illness. It’s a big moment for young Shadow, so we asked star Ricky Whittle if the moving scene will show up in the show’s forthcoming second season. “I don’t want to ruin anything, but I will say that everything you love in the book will be in the show,” he said, all but winking as he did so. Whittle also later referenced seeing Shadow at several young ages in Season 2, so make of that what you will.

Question: Anything on Fox’s The Gifted? —Wes
Ausiello: The stage has been set for the Inner Circle to pull a major heist, and when it goes down next Tuesday, “There’s a sequence — and you’ll know when it happens — that is the most badass two minutes,” Skyler Samuels, who plays the Frosts, told TVLine. “We finally see everybody out of the confines of headquarters and in the real world, all working together and just kicking ass…. Your mind is just sort of blown, like, ‘Oh s–t, the Inner Circle means business!’ It’s a game changer.” 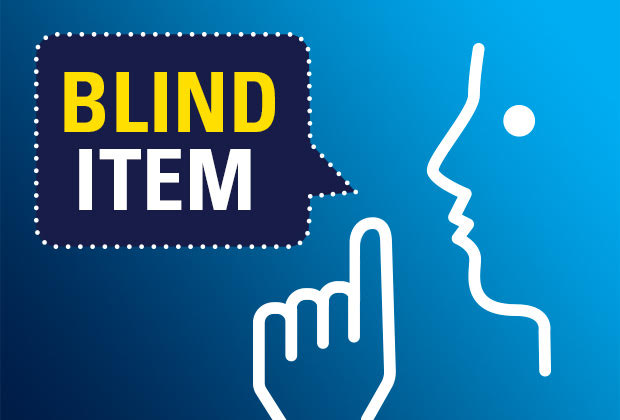 Question: From the looks of the last couple SEAL Team episodes, it seems like David Boreanaz is leaving the show. Please tell me he isn’t the original cast member you were referring to in your latest Blind Item. —Ron
Ausiello: He’s not the subject of the B.I. because he’s not leaving SEAL Team. Also, my brain teaser clearly states that the series in question has been on the air for quite some time (i.e. much longer than two seasons).

Question: Any random tidbits you can share about Manifest? —Anna
Ausiello: Matt Mitovich just Q&A’d Melissa Roxburgh about the NBC hit’s next episode — in which Michaela is invited over to Jared and Lourdes’ place for dinner (#awkward) — and with a look way further down the road, she teased that Episodes 12 and 13 “turn the page in a very cool way. More people are introduced who open up the mystery in a way that no one expected.” 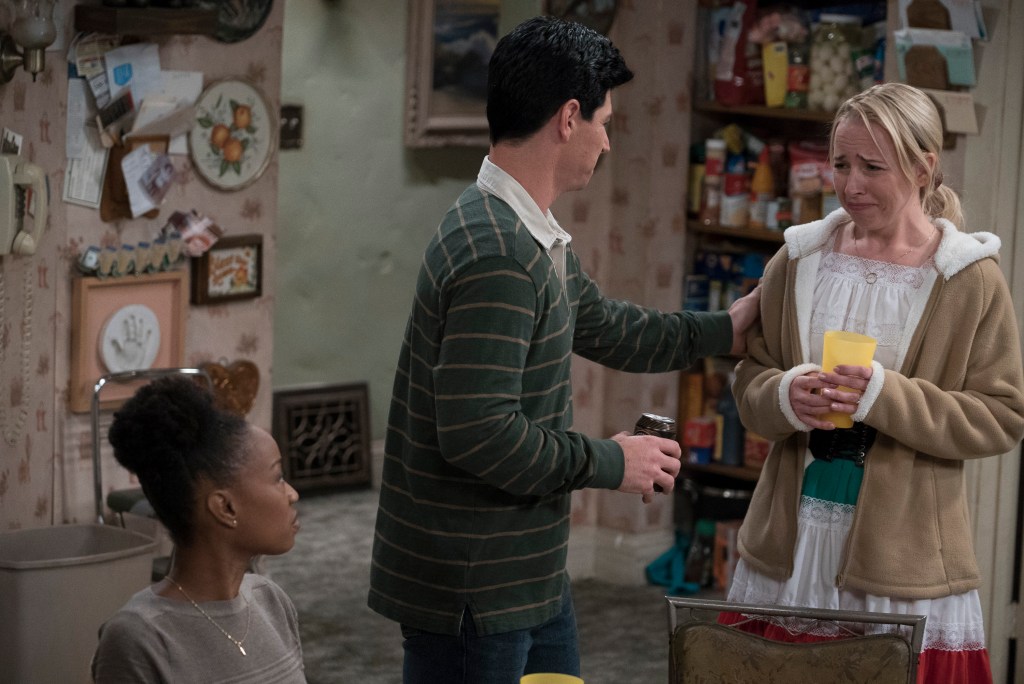 ♦ THE CONNERS: Is Becky pregnant? Check out the teaser synopsis and accompanying photo from the for the Nov. 20 episode, titled, tellingly, “Miracles”: “Life-changing news lands in the Conner household when a member of the family makes an announcement that no one saw coming.” I mean…
♦ ELEMENTARY: Joan’s desire to adopt a child has hit a potentially permanent snag. Asked if there are plans to continue exploring the storyline in Season 7, showrunner Rob Doherty replies, “Not immediately. The end of the sixth season was a pretty good example of the degree of difficulty that exists for a prospective parent like Joan Watson. Her job is unique, her living situation is unique.” And while Joan was “ready” for all of those complications, “the end of the season is a reminder that it’s dangerous to be a friend of Joan’s, let alone a son or daughter.”
♦ GOOD OMENS: Neil Gaiman was grinning when he told TVLine that the upcoming six-part Amazon series will handle the novel’s numerous footnotes “adeptly,” but he also offered up this mini-tease: “Episode 3 actually opens with Aziraphale being interrogated by God.”
♦ ALF: Cats far and wide can breathe a sigh of relief: I’m hearing the proposed reboot is not moving forward at this time after failing to attract a suitor. 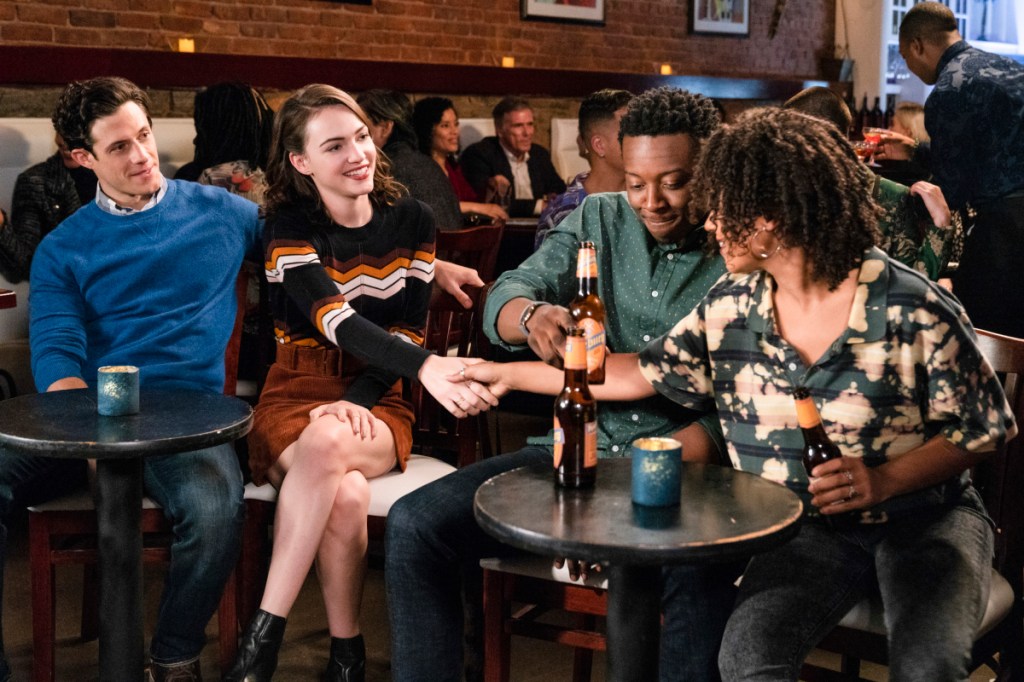 ♦ GOD FRIENDED ME: Awkward alert! The Nov. 18 episode finds Cara, Miles and their significant others all coming face-to-face (see photo, right), which stirs up some feelings for the friends. “There’s a bit of tension rising and a questioning of what is going on,” star Violett Beane teases. “That’s definitely going to be an interesting meet and greet.” It also may lead Cara to second guess “what she’s doing [with Eli], and if it’s the right thing, and if she’s doing it for the right reasons.”
♦ SUPERGIRL: Brainy has found an unlikely confidant in Lena Luthor, and that’s because both characters are “the smartest people on the planet,” executive producer Robert Rovner notes. And as actor Jesse Rath adds, “They also have these relations to these horribly evil people, and they are kind of the black sheep of the family — ’cause they’re good.”