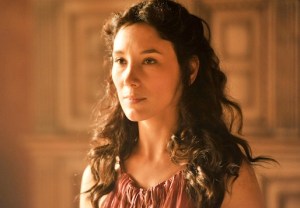 Warning: If you haven’t seen the Game of Thrones Season 4 finale, hitch a ride on the nearest dragon and head to a different TVLine story. Everyone else, read on.

Is there a fate worse than being sentenced to death?

After escaping prison with the help of his brother Jaime and thwarting his execution in the process, Tyrion discovered his true love Shae (Sibel Kekilli) in the bed of his father Tywin, who’d presided gleefully over his trial despite suspecting his innocence. Tyrion proceeded to strangle Shae to death, and then later ended his duplicitous dad’s life with an arrow (after Daddy Dearest referred to the fallen Shae one too many times as a whore).

TVLine caught up with Kekilli to discuss how her character wound up coupling with pretty much the worst guy in King’s Landing, why Thrones fans shouldn’t hate Shae for it and which of Tyrion’s actions redeemed him in her eyes.

TVLINE | When did you find out your character was marked for death in the Season 4 finale?
I thought for sure Shae was going to die in the third season. [Laughs] So I was surprised when she lived, and at the end of last season, I asked [executive producers] Dan [D.B. Weiss] and David [Benioff], “When is she going to die?” And they said, “Yes Sibel, we have to tell you, it’s going to happen in the fourth season.” I said, “No! Really? The beginning or the end?” And they said, “The end.” So I begged them every second: “Please don’t kill her! She will be a good queen!” But it didn’t work. [Laughs]

TVLINE | Had you read the books beforehand, or did you just work with the material you were getting in the scripts?
I haven’t read the books. When I was at the audition in 2010, before they started to shoot the first season… after my audition, I googled Game of Thrones and I thought, “OK, Shae is kind of a small part, or a superficial part.” But Dan and David told me, “Trust us, in the show, she will get more depth. It will change from the books.” So I decided not to read the books — not yet.

TVLINE | There are two big scenes that served as a precursor to what happens in the season finale. First is when Tyrion goes to his last resort to get Shae out of King’s Landing, telling her she’s nothing but a whore to him, that they’ve had their fun, and that she has to go so he can be with Sansa. Did Shae know he didn’t really mean it or did she really believe him?
Shae is clever, she’s not stupid. That was the reason she never believed his words [after the wedding to Sansa] — not until that final point. She was like, “Oh, come on, you don’t mean it. You’re just afraid of your father, your family.” But Tyrion changed his behavior toward her. He was colder to her, from episode to episode, and in the second or third episode this season, she could see how tender and lovely he was to Sansa. Of course, he felt responsible for Sansa, but it hurt Shae very much. And so, as we say in German, it was “the last drop in the glass” when he tells her, “You are a whore. You can’t bear my children.” He stepped over the line. She was so loyal. For four years she was there for him — even when no one else was by his side. She took care of Sansa, even after he married her. She got hurt — and at a certain point, you don’t think anymore, you just react emotionally.

TVLINE | And lest we forget, Shae pushed for Tyrion to run away with her, to leave King’s Landing and his family behind.
She said at the end of Season 2, “Come with me to Pentos!” But he didn’t want to go. I really think Shae is not someone who fell in love often, but if she does, it’s 100 percent. She was ready to die for him, to go through hell, but at the end she’s a low-born, so when he says, “You’re a whore, go away, I don’t want you here,” she’s essentially left to be what she was before she met Tyrion — a prostitute.

TVLINE | So, what was Shae’s state of mind when she came into the courtroom later in the season and lied under oath while Tyrion was on trial for his life — told the court he’d plotted to murder Joffrey?
I try to understand why she’s behaving like that. She got hurt very much, and all her hopes just disappeared into the wind. Like an earthquake, the foundation she was building on their relationship was just broken. And at that moment, it was revenge, and I really understood that. After years of being loyal, cleaning [chamber] pots for his wife, being treated like a dog, she’s like, “I’m here for revenge. And I wouldn’t be here if you, Tyrion, had left the country with me. You forced me somehow to do this.” And did she have a choice, anyway? If Cersei wants something, if Tywin wants something, she’s a woman without family, she’s on her own. She didn’t have a real choice to say, “No, I’m not going to this trial.” It was revenge, but it was also blackmail and coercion.

TVLINE | Right. If she’d said no, she’d probably have suffered a pretty horrific fate.
Absolutely! And Tyrion wouldn’t have known that. Cersei or Tywin would’ve said, “We found you. You have no choice. Testify or die.”

TVLINE | Shae’s final scene: How did you feel when you first read the script and realized she was in Tywin’s bed?
Oh God. [Sighs] When I act, I try not to think like Sibel. I try to think like Shae. But, again, she didn’t have any choice after the trial scene. The people hated Tyrion after the trial, and she had been with him. Who could she be with after that? There was one choice. She had to choose the most powerful man in King’s Landing. And who is that? It’s Tywin. If she wants to stay alive, she has to take that step. In the end, she thinks Tywin is in the room, and she says “My Lion.” That expression was for Tyrion only. He was her lion. But because she’s a prostitute again, she’s lost all hope for a regular life, she’s trying to get rid of everything that reminds her of Tyrion — to make nothing special of what they had.

TVLINE | Your final scene — there wasn’t a lot of dialogue between you and Peter [Dinklage], and yet there was a lot of pain and horror communicated. What’s her state of mind as she sees him?
The first thing is shock. “Why is here? He should be in prison.” But the biggest feeling is guilt. “Oh God.” She did that to him at the trial, and now she’s lying in his father’s bed and using words that were supposed to be just for Tyrion. And then there’s fear. “What’s going to happen to me now? I’m here on my own, and I have to fight for myself. I’m going to die or he’s going to die.”

TVLINE | A lot of Game of Thrones fans will think Shae is just the worst for coupling up with Tywin, for hurting a guy as popular as Tyrion. Do you feel the need to defend your character?
Tyrion is untouchable, honestly! [Laughs] They started to hate her even during the trial. But over these four seasons, she was playing with fire. Some people never trusted her. Some people were jealous of her, because they loved Tyrion so much. So she was always the loser in that sense, you know? [Laughs] I just feel pity for her — not as a victim. So yes, maybe fans will hate Shae because she is in the bed of Tyrion’s father, but maybe they shouldn’t forget that because of her, now, the father is dying too!

TVLINE | Is that some kind of twisted redemption for Shae? Tyrion’s feeling of, “I’ve just murdered the woman I love, but nobody can say something bad about her”? Is Tywin’s murder a victory for Shae?
If I was Tyrion, I’d think, “You destroyed my life. You destroyed my love. You forced her to say things at my trial. Now you’re sleeping with this girl when you never allowed me to be with her. And you took her from me, so now I’m killing you.” That’s the last thing he can do for us, for himself.

TVLINE | Is it hard for you to root for Tyrion now that he’s killed Shae?
I understand him somehow, but I was like, “Why is he so scared of his father? Why didn’t he just follow his heart with Shae?” Even if he stayed [in King’s Landing], he could have said, “No, I am not marrying Sansa!” As a fan, I would be angry at him, “Stand by your love! Follow your heart, Tyrion!” But he had a tough life in this world, where people don’t really respect him. Like he said at the trial, “I’m a freak!” That’s not easy, so I understand him.

TVLINE | Plus, pure intentions and true love rarely get rewarded on Game of Thrones!
[Laughs] Don’t love! Don’t love anyone on this show! It should be a rule, “No pure love!” [Laughs]

TVLINE | Will you keep watching Game of Thrones even though your character is dead?
Of course! It will be a bit harder because, “Oh no, I want to be there, too!” But I’m addicted to the show — I’ve never been a fan of fantasy, but this show just grabbed me and took me on this journey. I have to see where it goes — who’s having the throne.

TVLINE | And what’s next for you as an actress? Where would you like to go from here?
I’m not a native speaker, so of course I’m grateful to Dan and David and HBO. But if you forget the language, to be a part of a show like this, for the next few years it will be hard to have a better experience — to find a part at this same level. Of course, there are now more English castings and auditions, but you almost get the same scripts and parts sometimes. The difficult thing as an actress is to not get panicked. Just wait and be patient — even if it takes a couple of years — don’t let yourself be put in a box of the same parts, or something that’s just a copy of [Game of Thrones].

TVLINE | Any parting thoughts?
Yes, don’t hate Shae! She’s a poor girl, low-born, and she’s not a victim — but in this kind of world, the life is tough. [Laughs] And she loved, truly, Tyrion. I really mean it!