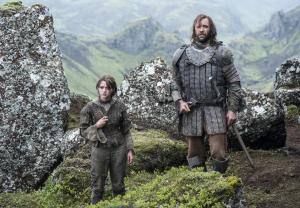 Warning: This recap discusses the events of Sunday’s game-changing Game of Thrones season finale, which means it contains spoilers for those who haven’t watched the episode. Proceed accordingly.

Well, happy Father’s Day to you, too, Game of Thrones.

The HBO drama’s fourth season draws to a close with two murders – one heartbreaking, one kinda deserved (but no less terrible, given what it means for the murderer) – as well as another goodbye that made me feel feelings for a character I didn’t even know I cared about.

Here’s what – and who — goes down during the hour.

HOUSE LANNISTER: CERSEI-COMES-CLEAN EDITION | The Mountain is dying from poison introduced into his wounds during his fight with The Red Viper (a posthumous Oberyn FTW!). Cersei has her maester do some weird voodoo on him to keep him alive, then runs to find her father and swear that she will out Tommen as a product of incest – and not Robert Baratheon’s heir – if he doesn’t break her engagement to Loras Tyrell and allow her to stay in King’s Landing. Jaime can’t quite believe his sister is that ballsy, which is really saying something, but he likes it: They end up going at it on a table.

HOUSE LANNISTER: SHAFTED EDITION | Tyrion starts the hour in his cell, waiting to be marched out to the executioner to pay for his alleged role in Joffrey’s death. When the door opens, though, it’s Jaime with a last-ditch plan to save his little brother! Yay! Woo! Aweso—eh, you know what? Things go from dire to soul-rippingly bad in such a short time, I can’t even feign enthusiasm over this glimmer of what turns out to be false hope.

Jaime’s plan: After Tyrion sneaks out of the cell, he’ll beat a hasty path to Varys’ door, knock a secret knock, and the Spider will weave him a web that carries the accused right outta King’s Landing. I repeat: ALL TYRION HAS TO DO IS GO DIRECTLY TO VARYS’ DOOR. Freedom awaits!

Yeah, he doesn’t do that. After a touching farewell with his brother, the former master of coin instead makes his way to the tower of The Hand, ostensibly looking for his father. But what he finds is so. much. worse. Shae (!) lies in Tywin’s bed, calling out for her “lion”: Yep, Tyrion’s former lover, the same woman who once vowed “I am yours and you are mine,” has been riding Papa Lion like a Disney attraction for some time now. A deeply wounded Tyrion launches himself at her when she grabs a knife, and they struggle. The fight ends with him strangling her with her necklace, him uttering a quiet “I’m sorry,” and me feeling like this took place a long time ago, indeed.

But wait! Now that Tyrion is an actual murderer instead of just a wrongly accused/convicted one, why not go all in? He grabs Joffrey’s crossbow and finds Tywin on the chamber pot, where the older man coolly informs his son that Shae was nothing more than a whore. He suggests they go discuss the matter elsewhere; after all, The Hand claims, he was never really going to let one of his own sons march to a certain death. “I’d never let Illyn Payne take your head. You’re a Lannister. You’re my son,” the slick manipulator says. But the older man accidentally calls Shae a whore again – which Tyrion has made clear is a no-no – and gets an arrow shot into his chest for it.

“You are no son of mine,” Tywin grits out, but a stone-cold Tyrion disagrees. “I’ve always been your son,” he says, launching another shot into his pop, killing him.

When Tyrion does make it to Varys, the eunuch puts him in a box with holes in it – a la what we learned about Varys’ tormentor last season – puts the crate on a ship heading out of King’s Landing and, at the last minute, jumps on board himself.

HOUSE STARK: FROM-BENEATH-YOU-IT-DEVOURS EDITION | Bran’s band makes it to the tree Bran saw in his vision, and it’s beautiful for all of 10 seconds before white walkers literally pop out of the ground and start to attack. Bran wargs into Hodor and kicks some undead ass; though props to Meera for holding her own, no? Jojen takes a white walker’s knife to the gut, but orders Meera to go with Bran, Hodor, the direwolf and a fireball-throwing sprite who leads the group into a safe cave.

But who is Bran’s unlikely savior? “The First Men called us the children, but we were born long before them,” she says in a voice that’s half a step removed from every single little girl in every horror movie. “Come, he waits for you.” Who’s she talking about? The human manifestation of the three-eyed raven, who’s holding court in some tree roots in the cave. (Side note: He’s got a David Carradine thing going on.) “I’ve been watching you, all of you, all of your lives,” he reassures them. “You’ll never walk again,” he says specifically to Bran, “but you will fly.”

HOUSE STARK: SO-CLOSE-YET-SO-FAR EDITION | Brienne comes across Arya practicing her thrusts and parrys, and they bond as swordswomen. It’s awesome. But when The Hound shows up, Brienne and Pod realize who Arya is — and Clegane outs her as carrying Lannister gold at her hip. (Side note: I love, love, love Rory McCann’s line reading when Brienne asks if he’s watching over Arya and he responds, “Aye, that’s what I’m doing.”)

Brienne and The Hound have a brutal fight — does she bite off his ear?!? — that ends with Clegane tumbling over a cliff and Arya scampering away to hide. After Brienne takes off, Arya finds her captor/travel companion in really bad shape. He encourages her to find Brienne and go with her, then orders her to kill him. “Go on, girl. Another name off your list,” he says. But she chooses to take his cash and leave him for the vultures, instead, with Joffrey’s once-powerful brother crying, “Kill me!” as she walks away.

The last time we see Arya, she’s setting sail on a ship bound for Braavos, courtesy of the coin she received from Jaqen H’ghar a few seasons back.

HOUSE TARGARYEN |  Daenerys can’t believe that a former slave is petitioning her to allow him to sell himself back to the beneficent master whose children he used to teach. The new world order she’s created, he claims, is one of fear and disorder among those who’ve been freed. She invokes the concept of free will and allows the man to return to his post, but Barristan Selmy warns her that the old masters will take advantage of the situation to re-enslave their former chattel. That’s bad news, but what comes next is worse: One of khaleesi’s dragons kills a 3-year-old girl, a point driven home when the child’s father dumps her charred bones at the queen’s feet.

Dany tearfully leads two of the beasts underground and chains them in place, then walks away as her unruly babies squall like colicky infants. She cries as they’re sealed underground. But where’s Drogon, the third?

THE MEN OF THE WALL | Jon Snow enters Mance Rayder’s camp to negotiate with the big man himself. They drink to Ygritte, Grenn and the giant that died in the tunnel at The Wall. Mance is honest with his former recruit: He and his men only want to get on the other side of The Wall so they can hide behind it. Mance’s offer of peace (of a sort) is interrupted when the King Beyond the Wall realizes Jon is there to kill him, but then that is interrupted by the arrival of Stannis, Davos and a legion of horseback soldiers. After Jon introduces himself as Ned Stark’s son and puts in a good-ish word for Mance, Stannis takes Rayder as his prisoner.

Maester Aemon (still alive!) leads a service for the fallen Night’s Watch brothers, who are then burned to ward off a case of the blue-eyed meanies as Stannis, Davos and Melisandre watch. Meanwhile, POW Tormund asks Jon, “Did you love her? She loved you,” and asks Snow to dispose of Ygritte’s body in “the true north.” Who knew Big Red was such a softie? Jon builds a very respectable funeral pyre off in the wilderness and sobs as it disposes of his love’s body.

What did you think of the episode? The season? Sound off in the comments!