In my heart of Randall-and-Beth-loving hearts, I’m pretty sure that the ugly fight that goes down in this week’s This Is Us is survivable. Something to learn and grow from. Something — hopefully? — to file under “unfortunate but surmountable” in the couple’s emotional archive. 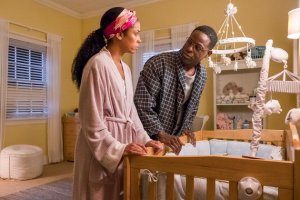 But I’m also a worrier. And the hour’s unsettling final moments gave me the same kind of uncertainty about the Pearsons’ marriage that the flash-forward did. So while I certainly hope that the epic argument that frames “R & B” is merely a blip in the couple’s rich history… I’m also aware that we might be witnessing the beginning of the end.

‘WHEN HAVE I EVER NOT HAD YOUR BACK?’ | We pick up right after Randall shut the door in the previous episode, with both him and Beth real mad and gearing up for a fight in their bedroom. Randall starts to speak, but Beth interrupts and says that she’s going first. “I am looking at you right now, but I don’t even recognize you,” she says. “Because my husband, the man that I married, would never talk to me the way you did on that voicemail. Ever.” When Randall apologizes and calls the whole thing a “misstep,” she doesn’t give him an inch. “When have I ever not had your back?” she wonders, coming to the conclusion that he’s mad because she won’t give up her life to accommodate his.

Of course, Randall doesn’t agree. He points out how he’s been trekking back and forth between Philadelphia and New Jersey so he can be around to cover her evening classes and such — but she says that’s just evidence that he’s aware he can’t change hermind, but he’s not “on board.” “Damnit, Randall, we have been having the same fight since we met!” she cries.

IT BEGINS | And because this entire hour can’t be Sterling K. Brown and Susan Kelechi Watson yelling at each other, we flash back to the first time Randall and Beth crossed paths. It’s the nametag moment from “Our Little Island Girl,” only this time, we’re watching from his perspective. Soon, it’s a while into the semester, and we witness the moment that Kevin teased Beth about back in Season 2, when he was “Cyrano-ing the entire thing” when Randall called her and asked her out for the first time. As we know, it works: Though Beth is surprised, she seems mildly amused by the boy from her Econ class who got a sudden injection of swagger, and she agrees to dinner.

But the night doesn’t go the way Randall planned, despite his attire (a sportscoat and tie) and the venue (a fancy restaurant). His conversation with Beth is stilted at best, and just when they’re starting to connect on a deeper level — about how both of their fathers recently passed away — the waiter asks them to pre-pay for their meal… which couldn’t possibly have anything to do with the fact that they’re the youngest, blackest couple in the place, could it? Randall, not wanting to have the night ruined, happily pulls out his checkbook (!), but Beth challenges the waiter on why the restaurant’s “policy” is only being applied to them. Then she grabs the flowers Randall brought her and informs him they’re leaving.

“You’re a lot, and this date was a lot,” she tells him in the lobby, adding that her perfect outing would’ve included nachos and ginger beer. “I just thought you deserved a great first date. You deserve everything,” he earnestly counters, and I know he’s sweet and all, but he IS a lot… especially coming from a 19-year-old. Beth gently tells him he’s a good guy, but that he shouldn’t call her again. Back at his dorm room, a goofily happy (and undaunted) Randall announces to his roommate that he’s going to marry Beth.

CONSPICUOUS CONSUMPTION | Skip ahead to seven years later, when Beth and Randall are living together and he’s a nonstop proposal machine. Thing is, even though she’s fully committed to being with him, she’s not ready to get married yet — a point she makes gently but firmly to quell a little of his unbounded enthusiasm for matrimony. It doesn’t work. And while they’re on a mini-golf date, with Rebecca as an awkward third wheel, everything comes to a head. “I don’t want my life to be consumed by my husband’s!” Beth cries. “And Randall, I love you, but you consume things.” While he nurses his hurt feelings, Rebecca takes everything in stride. “You think I want my son winding up with some wallflower?” she says cheerfully. “I’m glad it’s gonna be you.”

Then, on Rebecca’s suggestion, Beth takes Randall to a place that serves nachos and ginger beer, then announces, “OK, I’m ready. Ask me.” But before he does, she makes him agree that they won’t lose themselves in each other, that they’ll be a team. Then he gets down on one knee, already crying, and says: “Beth Clark, you are the love of my life. You are my reason, you are my joy, you are my everything. And I don’t want to do life without you. So, will you marry me?” She gives him an emphatic yes.

THAT’S THE WAY LOVE GOES | Then we cut to the day of their wedding, which is being held in the backyard of Beth and Randall’s new home in New Jersey. Beth looks gorgeous, but she’s panicking: She doesn’t have her vows written yet, and it’s time for everything to get underway. She asks Kate to buy her a few more minutes. Meanwhile, Randall has pages and pages of vows written, but when he tries them out for Kevin, Randall quickly realizes that he didn’t write vows, he “wrote a deeply boring dissertation on marriage” instead. So he starts a last-minute rewrite, too.

When Beth finds out, she storms into the bathroom where he’s working and — while both of them avoid looking at each other (it’s bad luck, after all) — they wind up co-writing what they’ll say to each other during the ceremony. They wind up composing a beautiful promise to each other that includes her saying she’s “never been seen so completely, loved so passionately, protected so fiercely” and him adding that “every part of me belongs to you… except for that very small part of me that I promised to Janet Jackson when I was 16.” Footage of them working on their words is intercut with shots from the ceremony, and at the end, they joyfully jump the broom into life as Mr. and Mrs. Pearson. 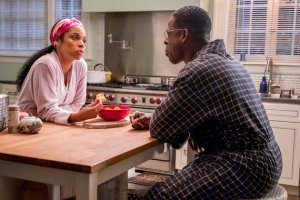 NACHO MAMA | This episode really checks off a few items from the list of character milestones we wanted to see, so thanks, This Is Us! To wit: The next scenes take place in the wee hours of the morning when Tess is an infant, as a sleep-deprived Randall and Beth halfheartedly snipe at each other while changing their daughter’s diaper. Randall defuses the situation by offering to make nachos, and Beth happily agrees.

They devour the snack downstairs in the kitchen after Tess goes back to sleep. We see them play “Worst-Case Scenario” for the first time (#historic), and when they start discussing the looming end of Beth’s maternity leave, Randall reassures her that they’ll make it work. “‘Make it work’ usually means I adjust, I make it work,” she tells him, saying that she always has to lose something in order for their lives to run smoothly. Then she delves into a protracted analogy about nachos, and… “What, do you feel like I leave you with the crumbs?” Randall asks, shocked and a little offended. But before they can get into it too much, Beth tables the discussion, and they go back to bed. 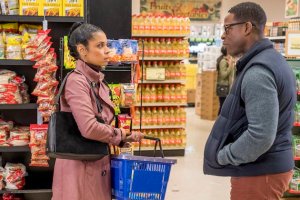 LIVING SINGLE (OR TRYING TO, AT LEAST) | Then we jump to the time when Kevin and William were both living with Randall, Beth and the girls. She heads out to spend the day/night at an urban planning conference in Pennsylvania… but then Randall and William run into her as she’s buying red wine and Swedish fish in the local grocery store. Huh?

Randall quickly deduces that she made up the conference so she could spend the night in a hotel, watching movies, quaffing wine and snacking on Swedish fish. “I just needed 24 hours to myself,” she says sheepishly after apologizing for the lie. But when Randall says she should’ve just asked for some time alone, she counters that the last time she did, he didn’t understand and assuaging his hurt feelings was exhausting. He eventually says he’s cool with her taking some me time, but by then they’ve joked about Living Single and she doesn’t want to watch it alone. So she announces that she’s coming home with him and William.

BETH GOES THERE | And then we’re back in the present, with Beth and Randall fuming at each other in the bedroom. “I don’t want to be swallowed up by you and then you sweet-talk me and do whatever the hell you want,” she says. “You have turned me into your mother!” But she’s nowhere near done. “Admit that you think that your job is more important than mine,” she demands, causing Randall to flash back to Jack and Rebecca’s “You are a 40-year-old woman singing covers in pubs!” fight, which he witnessed as a teen. Beth sadly notes that she’s broken the promise they made to each other by losing herself in him, “and you have let me.”

For her final blow, Beth vows not to give up teaching dance. “I am not going to bend. And that’s the problem,” she says. “Our lives don’t work unless I’m doing the bending. It doesn’t, and we both know it.” Ouch.

But Randall refuses to accept her “revisionist history,” looking at her like she’s lost her mind. “In what universe have I been steamrolling you for the last 20 years?” he asks. “I refused to be blamed for the fact that you had your awakening 20 years too late.” Double ouch.

But then Beth lands the killing blow, citing Randall’s anxiety attacks as part of the reason she hasn’t been able to follow her dreams. Quintuple ouch. The moment it’s out of her mouth, Beth’s face falls like she can’t quite believe what she’s just said. Horrified, she immediately apologizes, but Randall’s done. He’s going to Philly, because “I do not want to be in this house with you right now,” he announces.

So he sleeps at his campaign office. She cries in their bedroom. And absolutely nobody is happy as the episode goes to black.