Kate and Toby finally get to hold their prematurely born son in this week’s This Is Us, but they might want to cover the little guy’s ears: The yelling that’s soon to come from Randall and Beth’s house in New Jersey probably will be audible clear across the country.

As Tess, Annie and Deja’s parents learn in the hour, it turns out that you need more than a heavily filled-in whiteboard schedule in order to make the Pearsons’ new normal work. And when Randall makes his unvarnished opinion of Beth’s new job known? All we can say is: The show better not cheat us out of seeing the rest of the fight that starts in the final moments of this week’s episode.

Read on for the highlights of “Don’t Take My Sunshine Away.” 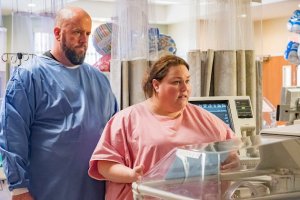 TOBY DADS UP | Two days after little Jack’s birth, Randall and Beth are in the Neonatal Intensive Care Unit to say goodbye to their newest nephew. (He’s not dying. They’re just heading back to the East Coast. That’s a morbid, but I think necessary, clarification to make.) Kate is rather upbeat, singing “You Are My Sunshine” to her son. But Toby still looks positively stricken, and when a nurse comes to take routine blood and urine samples from the baby, Papa Damon cannot bear to watch.

In the waiting room, he laments his fate to another preemie dad, who stuns Toby when he mentions that he and his wife have been hanging out at the NICU for six weeks, hoping their daughter can survive complications from being born with a hole in her heart. And they don’t even have it as bad as some other parents, whose child likely will die without ever leaving the hospital.

With his perspective adjusted, Toby returns to Kate and Jack and apologizes for how he’s been acting since Jack was born. She admits she’s felt alone, but accepts his apology. “He is tiny, and it is scary,” she says. “But Toby, we made him. You and me.” She then leaves him alone with the baby for the first time so she can go take a shower. When she returns, the nurses assist the new mom and dad with holding Jack for the first time. 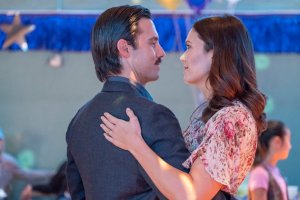 JACK’S FIRST SCHOOL DANCE | Let’s deal with this episode’s flashback, shall we? Rebecca and Jack chaperone The Big 3’s first school dance, which takes place when The Big Three are preteens. (Randall attends courtesy of an invite from one of Kate’s friends.) Kevin is looking to get his first kiss from “girlfriend” Sophie; that eventually happens as he and his friends are toilet-papering the principal’s office, an activity in which Soph reluctantly takes part. Randall spends most of the evening hiding in the school library and studying for an upcoming science test; Rebecca and Jack find him there when they sneak off to makeout.

Speaking of the ‘rents, Rebecca finds it very sad that Jack never went to a school dance. He seems less bothered by it. During the evening, she gets the DJ to play Frankie Avalon’s “Don’t Let Love Pass Me By,” and as they slow-dance, they muse about what happily-ever-after is going to look like for their kids when they grow up. 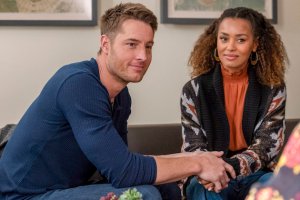 KEVIN MAKES A CHOICE | For Kevin, it looks like couples’ counseling. When he and Zoe see a therapist, he’s very charming, stating that he wants “to do sobriety right this time.” To that end: He’s been sober four days, we learn, and going to daily Alcoholics Anonymous meetings. But Zoe brings up his water bottle filled with vodka — from the lack of surprise on Kevin’s face, I’m guessing that they’ve already discussed it at home — and that she wants to be there for the long haul but doesn’t want to be a “sucker.” Kevin promises her that he wants everything with her, including settling down and kids. She looks uneasy at that.

Turns out, Zoe doesn’t want kids. Never has, never will. And she understands if Kevin does want them… but they should probably break up if that’s the case. “It just seems like something people do. But I guess I don’t have to have one. Not necessarily,” he says, adding a whole lot more noncommittal nonsense before he’s done. (Side note: Someone please cast Kevin as Wicked‘s Fiyero, because this guy is the poster child for the unexamined life.)

Sometime later, Kevin goes to an AA meeting in Park Slope. Afterward, he realizes he’s by Sophie’s place… and she finds him lurking outside her door. She wonders if he’s OK. He says he is. He asks her out for coffee. She says she’s engaged. “Well, then, a coffee should be safe,” he replies.

At the coffee shop, we learn that Sophie’s fiancé is a Long Island native named Grant who loves Billy Joel and proposed to Sophie six months after they met. Kevin tells her about Zoe’s desire to stay child-free, then laments that he sucks at making decisions. “That’s probably because you’re not used to doing it,” Sophie says bluntly but kindly, adding that Kev has always gotten what he wants “just by being you.” When she gets a message from the hospital where she works, she has to go. But first, she offers up some parting advice: “Decide what you want. You always get it.” (Side note: Man, I miss Sophie.)

At home, Kevin announces that he’s made a decision: “I choose you.” Zoe is wary but happy. There’s no possible way that this will all play out well, right? 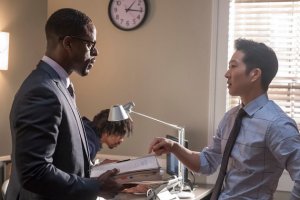 IN WHICH RANDALL’S TEMPER GETS THE BEST OF HIM | Upon their return to New Jersey, Beth and Randall go about splitting parental and family obligations in a way that will let him start working as a city councilman in Philadelphia and her as a dance instructor. But it’s clear from the start that the system isn’t going to work, and that they’re starting to resent each other for it. Randall barely makes it to a recital of Beth’s students, and though she doesn’t come out and say it, she’s angry that he missed her boss’ making glowing remarks about her before the show. And Randall isn’t happy when Beth would rather go out for drinks with the studio owner and some co-workers instead of hauling it to make his crucial work dinner with other Philly politicos.

“You know, my work is just as legitimate as yours is, Randall,” she tells him when he balks at her trying to get out of the engagement. “I need you to do this one thing for me,” he says shortly. Beth retorts that he’s made it very clear what he wants, then she hangs up.

So when she’s 20 minutes late for the dinner that night, and she’s not responding to texts or fielding his calls, Randall assumes that Beth is standing him up. So he calls her and leaves a scathing voicemail. It’s like he goes through the mental checklist of “Things You Cannot Unsay to Your Partner” and CHECKS. OFF. EVERY. DAMN. BOX. Choice phrases “teaching bored housewives how to twirl better” (his estimation of her job) and “Grow the hell up, Beth.” Ouch. 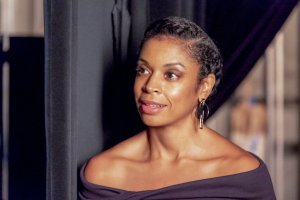 ‘CLOSE THE DOOR’ | But here’s the thing: Beth shows up at the dinner, albeit late because of traffic, and tells Randall that her phone died along the way. His “Oh, poop” face is hilarious, as is the way he tries throughout the meal to ascertain whether or not she’s heard his mean message.

The moment they say their goodbyes and leave the house, it’s clear: SHE DID. She angrily informs him to sleep on his cot at the office. But he doesn’t. He shows up in their bedroom a little while after she gets home, and IT’S ON. “Fine, you want to do this right now?” she says. “Let’s do this. Close the door.” And before I can pop some popcorn and settle in for the main event, the episode goes to black. Nooooooo!