The good news, coming out of Tuesday’s This Is Us: Kate and Toby’s son has been born and is named Jack. And though he is very, very premature and will need a lot of help to thrive, he’s here.

The bad news: Kevin’s drinking problem is far worse than he lets on, and when Zoe finds out, it may be the beginning of the end for them.

Read on for the highlights of “The Waiting Room.” 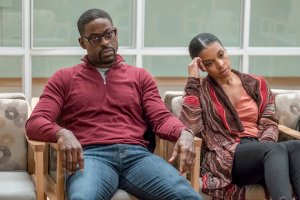 THE WAITING IS THE HARDEST PART | It’s 4 am, and Rebecca, Miguel, Randall, Beth, Kevin and Zoe are in a hospital waiting room, hoping for news of Kate and the baby. Everyone is tired, on edge and a little rank; when Kate’s doctor comes out to deliver an update, he says that the baby is still in the womb and things have stabilized, which is good. He reiterates that they want to keep the infant inside her for as long as possible in order to give him brain and lungs more time to develop, then suddenly realizes that the strung-out people before him have been sitting there since Kate was admitted 26 hours before.

The physician tells them to freshen up and grab some food, but Rebecca isn’t having it. “This family stays,” she informs him. Perhaps hoping to get away from them as soon as possible, the doc rebuffs Miguel’s attempts to Google one of Kate’s meds and slips away from Kevin when he edges dangerously close to yelling “DO YOU KNOW WHO I AM?!” as it pertains to his sister’s care.

After he leaves, all attention quickly turns to Kevin, who is hungover after his bender the day before. He points out that he only abused alcohol this time, not pain pills like before, and that “It wasn’t a shining moment, but I was not out of control.” Beth says that no one is judging him, but Kevin is sure Randall is. He’s kinda right.

The two brothers’ sniping is interrupted when Miguel introduces a game to pass the time/lighten the mood. Objective: Name a food that isn’t improved by the addition of either chocolate or ranch dressing. The others halfheartedly play throughout the rest of the episode, but no one’s heart is in it. Meanwhile, Zoe realizes how many times Kevin lied to her in the weeks since he returned from Nicky’s trailer, then asks him whether he was drinking while they were in Vietnam. He vehemently denies that he was. 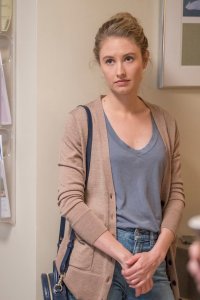 EVERY DAY YOU SEE ONE MORE CARD | Madison, bless her heart, arrives with donuts and a chipper attitude that exactly no one asked for. She tries to make conversation and fails, and then responds to Miguel’s chocolate/ranch question by saying, “Toothpaste.” Sigh. She meant well. A few seats over, Randall and Beth are weird to each other, because they never settled their conversation about her possibly giving up her job. So they wind up arguing about it in front of his whole family.

“I feel like if your wife wants to try something new, you should support that,” Kevin says. Then Madison makes a comment about Misty Copeland, which admittedly is boneheaded, but then Kevin is a giant arse to her about her very presence at the hospital, and she scurries out. He apologizes lamely, to her and everyone, then says he’s going to get some air.

“So are we just not going to talk about his relapse?” Randall says, but Miguel tells him they’re going to focus on one thing at a time. (“Did Miguel just dad-voice me?” Randall, stymied, asks Beth. Ha!) Beth and Randall then attempt to have more of that big conversation — he’s worried about money, she tells him his remarks about her job and her happiness sound like he’s being selfish — and then Rebecca gets lightheaded and Beth force-feeds her a donut.

Outside the bathrooms, Miguel realizes that Madison hasn’t left the hospital. She tells him Kate’s birth plan included her, and that she feels guilty that Kate and Toby don’t have a little Ruth Bader Ginsburg doll Kate bought for their baby. “It’s tough, feeling on the outside of this family,” he sympathizes, then tells her he’s sure she’ll find a way to help Kate through her ordeal. 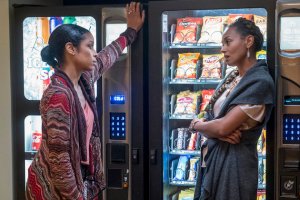 YOU TAKE IT ON FAITH | When Kevin returns, sipping from a water bottle and with his temper apparently in check, he and Zoe quietly discuss his relapse. He says he didn’t tell her what was going on because he didn’t want to drag her into it. “It’s too late,” she replies. “I’m in it.”

Later, at the vending machines, Zoe tells Beth that her biggest worry isn’t Kevin’s addictions… it’s that he lied to her so frequently. Beth knows her cousin’s modus operandi is to split, and “I wouldn’t judge you if you did.” But, Zoe wonders, “Would you judge me if I stayed?”

Back in the waiting room, Randall and Beth approach Miguel and Rebecca with an idea: They can help out with childcare in New Jersey! But the grandparents actually were planning to move to California to help Kate with the new baby, they say, putting Beth and Randall back at square one. Randall is mad. Kevin gets mad at Randall for being mad. And eventually, Kevin stalks out of the waiting area to see if he can get some word on his sister. While he’s gone, Zoe takes a swig from his water bottle, which will be important later. And when he gets back, he’s got a potentially scary update: Kate’s doctor just got called into emergency surgery, but they’re not sure if Kate is the patient on the table. 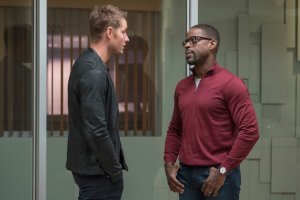 YOU TAKE IT TO THE HEART | With the tension upped that much more, it’s only a matter of time before Kevin, Randall and to some extent Miguel are yelling at each other. Rebecca shuts down the arguing with a stern reminder that “none of this matters.” She says she can remember every single detail of the waiting room at the hospital where Jack died, and she proves so by reciting them. “I’m sorry, but anything that’s bothering you right now that doesn’t have to do with Kate or my grandson? It doesn’t belong here. It doesn’t matter,” she says. “And I need you to put it away, right now.”

As Randall is apologizing to her, Toby comes into the room. “He’s here. It’s a boy. And he’s very premature,” he says, explaining that Kate had an emergency caesarian section when their son’s heart-rate dropped. “He’s really, really small” and can’t breathe on his own yet, Toby dazedly reports.

And now it’s really time for the Pearsons to take a break, freshen up, etc. As they decamp from the waiting room, Madison approaches Miguel: She told a big lie to get into Kate and Toby’s apartment, so she has the RBG doll for the baby. Elsewhere, Kevin tells Zoe that he doesn’t think he can get through things without her, and she hugs him. After he walks away, Beth congratulates Zoe on stepping out of old patterns by sticking around. “His water bottle was full of vodka,” Zoe says flatly. (Side note: After all that time in a confined space, how did no one smell that?)

THE WAITING IS THE HARDEST PART | In the neonatal ICU, Toby wheels Kate’s chair up to their son’s incubator. The baby is, indeed, incredibly small and full of tubes and such. “I would murder someone for him, Toby,” Kate whispers. She announces that she wants to name him Jack, then asks Toby to hold her hand. Then she looks up and says, “Hey Dad, I don’t know where you are, but I know you’re there.” She’s fighting tears but resolute. “This is Jack,” she continues. “This is your grandson, and I need him to be OK.”