The bright spot in this week’s otherwise pretty sad This Is Us? Even though the episode chronicles The Big Three’s high school graduations, it makes us sit through exactly zero minutes of the hackneyed speeches that usually accompany the rite of passage. There’s no quoting of Robert Frost’s “The Road Not Taken” or Langston Hughes’ “Dreams.” There’s no montage of tassels being moved from one side of the mortarboard to the other. There are no diplomas held high in triumph. And as someone who once had a local newspaper gig covering high school graduation ceremonies for a suburban newspaper, I say: THANK YOU.

Instead, the hour focuses on how hard it was for new widow Rebecca to get used to the fact that time marched on in the wake of Jack’s death, leaving her to witness their kids’ important life moments all by herself. Meanwhile, in the present, Kate quickly gets to the bottom of Kevin’s twitchy behavior and then sheds some scared tears of her own, for a completely different reason.

Read on for the highlights of “The Graduates.” 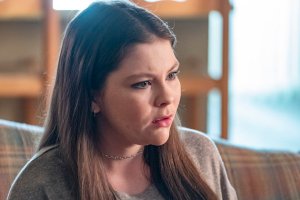 HOME MOVIES | A happy flashback moment in 1982 — Jack and Rebecca shopping for a video camera in order to capture their toddler triplets in actions — segues into a sadder one in the 1990s: Rebecca, solo, shopping for a new camcorder in order to chronicle the kids’ imminent high school graduations. A single dad she knew from the middle school PTA works at the electronics store and helps her, then awkwardly asks her out on a date, backing off immediately when she looks stricken by the suggestion.

Back at the Sad Apartment of Sadness, Kate is watching Felicity and pointedly ignoring Kevin, who has evoked her ire by announcing that he’s planning to move to New York with Sophie and start his acting career after graduation. An angry Kate says she’s not going to walk at their school’s ceremony. But Randall will definitely be a part of his school’s proceedings: He’s valedictorian. (Did you expect anything less?) 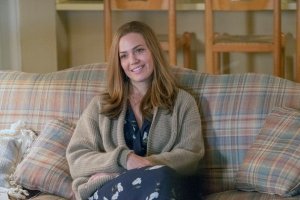 MIGUEL TO THE RESCUE | Both of the graduations are held on the same night, and at Randall’s, Rebecca has a panic attack and has to step outside to have a crying breakdown. Miguel, who’s also in the audience, follows her and gently suggests that she join a grief counseling group. “I don’t want grief counseling, Miguel. I want to rewind the clock,” she grits out. (Side note: Mandy Moore is fabulous here.) So he proves himself a good guy by telling her that he will videotape the event, and all she has to do is sit there and be supportive of her kid. They walk back inside together.

Afterward, Kate, Kevin and Randall all attend the same party and talk about how they’ll make sure they’ll be in each other’s lives forever. Kate also tells Kevin he has her blessing to go to the Big Apple: “It’s not your job to stay here and protect me.” Meanwhile, Rebecca goes home and watches an old videotape of Jack being silly. She’s leveled by it, but she pulls herself together enough to call Miguel and ask him to drive her to a grief counseling meeting that night. So he does. 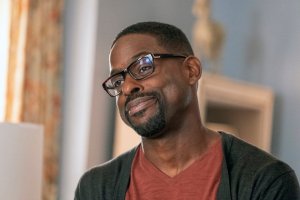 DANCING MEAN | While Beth is at her first day of work at the dance studio, Randall fields a call from an upset Deja. For class, the teen wrote a personal essay about living in her mother’s car; the teacher published it in the school’s online newspaper without asking Deja’s permission, which upset the girl. After a moment’s thought (those “OKs” and “Nopes” of Randall’s were amazing, right?), he drives to the school to confront the teacher. She’s young and easily persuaded to take the essay off the site, tearfully apologizing to Randall for doing such a thing without asking Deja whether it was OK. While he’s there, however, she wants to discuss Deja’s educational plan. Though the social worker and the Pearsons had suggested holding Deja back in seventh grade in order to shore up her educational shortcomings, the teacher says she’s caught up and is so advanced that she could skip eighth grade altogether.

Nerd that he is, Randall thinks this is an amazing idea. Deja doesn’t agree. Though at first she says she thinks she’s getting special attention because of her past, she eventually confesses that being Beth and Randall’s kid has finally given her a routine — and she likes it. Skipping a grade would mess with the routine, and she doesn’t want that at all. 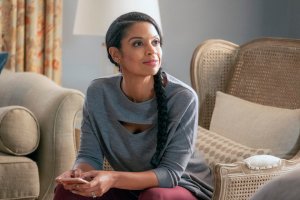 When Beth comes home, exuberant after her great first day at the studio, Randall fills her in on what she’s missed. He also brings up the idea of hiring an adult who can be around for the girls while he’s in Philly and Beth is a dancing queen… but then almost immediately pooh-poohs the idea as too expensive. AND THEN he asks Beth to “put a pin in” her teaching career in order to stay home and be there for Tess, Annie and Deja. “So you get to have your dream and I’m just supposed to quit mine?” she asks. Before he can answer, the phone rings: It’s Rebecca, with some bad news we’ll get to in a few moments. 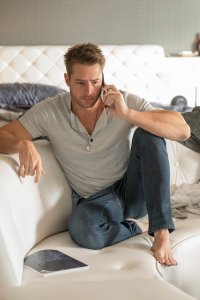 KEV’S RELAPSE REVEALED | Kate doesn’t think her graduation from the community college is a big deal, but Toby does. So he sets up an entire ceremony just for her, and he invites the few other students who wrapped up their credits at the same time. He also invites Rebecca and Kevin, who are pleased to celebrate the mom-to-be’s big achievement.

But Kevin’s hiding something huge: He hasn’t told anyone that he fell off the wagon at Nicky’s, and he’s been on something of a bender ever since. Zoe is under the impression that he’s been in Los Angeles, having meetings with the likes of Steven Soderbergh. Kate doesn’t know where he’s been, but she knows he hasn’t been hanging out with her. The truth of it is that Kevin has been hiding out in his hotel room, getting obliterated by himself.

His tenuous lies start to fall apart when Zoe surprises him and shows up in California for Kate’s graduation. But the moment he arrives at the college, Kate suspects something is wrong with her twin brother. And when Zoe mentions a spa day that Kevin told her he shared with his sister, Kate is certain that something is up. He bails out of the event by saying he’s got to meet with Soderbergh’s producers; when Kate later arrives at his hotel room, she pushes past him, sees the empty bottles and strongly encourages him to tell Zoe what’s up. Instead, he promises he’ll go to a week of Alcoholics Anonymous and get a sponsor, then confess everything to his girlfriend.

“The Nicky thing, it messed me up a little bit. And it triggered my, whatever. And I had a drink. Maybe that got out of hand,” he says, in the understatement of the season. Kate eventually hesitantly agrees to his plan, but then finds a meeting that evening and tells him she’ll drive him there. 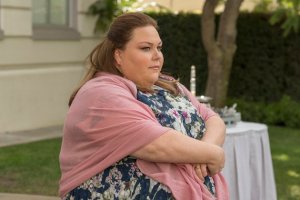 ‘IT’S TOO SOON’ | On the way there, Kate suddenly feels like something’s wrong with the baby. Then her water breaks. It’s bad news, because she’s only 28 weeks along in her pregnancy, which is too soon for her son to be able to make it outside the womb. She pulls over and Kevin calls Toby, but Kev says they have to wait for an ambulance to come get her, because he’s not sober and can’t drive. When they all meet up at the emergency room, Toby is furious, Kate is scared and Kevin is feeling even worse about himself than he was a few hours before.

Kate gets a shot that stops her labor, but 10 hours later, she’s still feeling incredibly worried about the pregnancy. The baby needs weeks, not hours, of time before it’s born, she points out to Kevin. Then Randall, alerted by Rebecca by that call earlier, arrives unannounced at Kate’s hospital room. “This baby can’t die, guys,” Kate tells her brothers. They reassure her he won’t.