I swear on Oprah: This Is Us‘ Randall needs to get himself in line. And soon.

If you don’t know what I’m talking about, you probably haven’t seen this week’s episode. Allow me to catch you up. Randall and Beth had Fight #432 about how his new position as Philadelphia city councilor should take precedence over her new role as a suburban dance teacher. When the disagreement ended on a bad note, and then Beth failed to show up at a dinner when he expected her to, Randall left a scathing voicemail for his wife. Though you won’t be able to hear his condescending tone of voice or watch the holier-than-thou scowl play out across his face, I’ve taken the liberty of transcribing what he said below:

If you had told me something was this important to you, heaven and earth couldn’t have stopped me from being there. But maybe that’s the difference between us. I don’t know. I hope it was worth it, OK? I hope you’re off having fun, talking about how to teach bored housewives how to twirl better. Grow the hell up, Beth.

(Before we continue, I’ve got to take a moment to praise Sterling K. Brown, who’s so reliably excellent week in and week out but was downright hilarious as he played Randall’s realization that Beth hadn’t stood him up, after all. Amazing work there.)

Sure, we’ve all said things in the heat of the moment that we later regretted. Even so, as recently as last season, I would’ve thought Randall incapable of talking to his life’s partner that way. After all, this is Randall — thoughtful, driven, selfless, loving Randall! — who refers to Beth as a “black queen,” dotes on Tess, Annie and Deja and cries on the regular. He’s easy on the eyes. He runs. He cooks. He braids hair. He’s perfect… right? 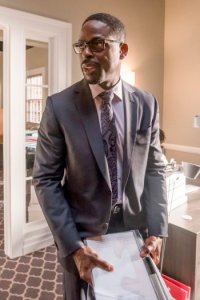 That’s what I thought, too, until Randall threw his hat into the ring in Philly. I’ll put aside for a moment how insane it is to run for an elected position in a state you don’t live in, in a city that’s hours away by car. I’ll let it slide that nothing about Randall’s city-council plan changed, even when Beth was laid off and the family was left with no discernible income. But what I cannot ignore is the way that Randall flat-out refused to even entertain the idea of dropping out of the race when Beth, after thinking about it for a long time, asked him to.

Sure, she eventually came around and backed him all the way to victory. But something Beth said when they were hashing things out in the hospital waiting room last week struck a chord: When Randall was discussing how they don’t have enough funds to cover child care now that she’s started teaching dance, he repeatedly vowed that he just wanted her to be happy, because “if you’re not happy, I’m not happy.” Beth immediately called him out on the selfish nature of that statement; though her reaction was a little snippy, the sentiment behind it rings true.

Guys: Is it possible that Randall has been this terrible all this time, and we were just too charmed by the wife pep talks and dad jokes to notice?

Looking back, a whole lotta signs point to yes. Randall brought William home to live with them in New Jersey without giving Beth a heads-up. He quit his job — and remember, he was the breadwinner — without consulting her. And he jumped into starting the demolition work on William’s building despite Beth’s sage advice that they slow things down a bit.

On that last one, the result was cockroaches. Swarms and swarms of cockroaches. And no one wants the marital equivalent of a pest infestation.

On the other hand, all couples argue. Real relationships, even really great relationships, aren’t all swoonworthy speeches and bathtub sex. But good lord, it’s time to make things right. From the promos, it looks like next week’s episode will chronicle Randall’s entire relationship with Beth “Don’t Call Me Bethany” Clark Pearson — including the fight that began at the end of this week’s hour. It will be the perfect time to show us that Randall is the man we’ve loved for nearly three seasons, someone who can acknowledge that Beth has sacrificed a lot for him to follow his dreams. I know that Randall can give his woman the space and support for her to do the same and can use that valedictorian brain of his to figure out a way to make it work for everyone.

I also know how dearly the show holds its patron saint, so I don’t say this lightly: This Is Us, please reassure us that Randall really is Jack Pearson’s kid.

Do you have thoughts about Randall in Season 3? Let us know in the comments!