I had a feeling of dread, coming into this week’s This Is Us. After all, the episode’s title is “That’ll Be the Day,” and I spent too many long car rides as a child listening to my parents’ oldies station not to know that that jauntily sung Buddy Holly lyric ends with the words, “that I die.”

Turns out, my Pearson intuition was right: At last, the episode offers up how the Pearson family home caught fire and killed Jack. Even though we’ve known it was coming, it’s still a blow. (And yes, the post-Super Bowl episode will actually give us the gory details about Jack’s demise, but this hour answered a lot of questions, no?)

Read on for the highlights. 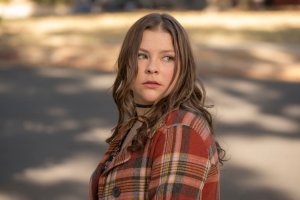 ALL WE NEEDED WAS A LITTLE FLIP | An old couple named George and Sally pick through their junk-filled garage. She tells him to throw everything out — the house has been on the market for three months, and it’s not selling. He reminisces with her about how she used to come into the diner he worked in, where “That’ll Be the Day” by Buddy Holly would be playing on the jukebox. She’s not moved, and tells him to clean everything out.

It’s early on Super Bowl Sunday, and Rebecca’s already got her Steelers jersey on. But when she brings Jack his wake-up shot — OJ instead of whiskey — she finds him looking through the real estate section of the paper: He’s taking a very measured approach to Big Three Homes, thinking about flipping a few properties and seeing how it goes before quitting his job. Rebecca seems impressed. They lament that it’s their last Super Bowl with the kids still living at home, but then Kate complains that Randall is taking too long in the bathroom as he primps for Allison’s visit, and it’s back to business as usual.

Downstairs, Kevin is still a jerk and still on crutches. Randall and Allison decorate football-shaped cookies. And Kate learns she’s in the final round of applicants at Berklee School of Music — she just has to submit one more audition tape. It should be noted that all of the kids are terrible to Jack in that way that teens are to their parents: Kevin mocks his dad’s self-built entertainment center, Kate yells at Jack as he lovingly tries to capture her audition on videotape and Randall breaks Jack’s heart when he chooses to take Allison to see Titanic instead of sticking around to watch the big game with the family.

PARENT AS PUNCHING BAG | Oh wait, it gets worse. Kate tells Jack to stop telling her that he thinks she’s beautiful. And when Sophie gets into NYU, Kevin has a freakout about how he’s destined for community college and how he should’ve been playing in the Super Bowl, not watching it with them.

Later, though, Kate views the tape and asks Jack “don’t ever stop” trying to make her see herself the way he sees her. But then she — like her two brothers — bails on watching the game with her folks. So it’s just Rebecca, Jack and the new entertainment center for the event. Then Rebecca shows him a perfect property to flip, owned by an elderly couple (and we’re made to think it’s the one we saw in the beginning of the hour). When she reveals that she “got a little excited” and already called the realtor, he has a proposition: “Be my business partner.” She thinks about it, starts to love it, then agrees. They kiss, it heats up, and then they scamper upstairs to have sex.

Kevin, to his credit, calls home to apologize to Rebecca for his behavior. But when she offers to put Jack on the phone, he says he’ll talk to his dad the next day. Then he hangs up and asks Sophie if she wants to go to a party in the woods he’s heard about. 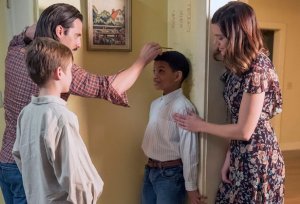 Late that evening, Randall’s return wakes up Jack. They chat in the kitchen about his date. “We kissed,” the boy confesses, all goofily happy. Randall says goodnight and goes to bed, and Jack cleans up everything Rebecca was too tired to address earlier in the evening. Jack scribbles a note — “Kevin, if I don’t see you before work tomorrow, I love you. You owe us all an apology. — Dad” — then looks at the kids’ growth charts on the wall and turns off the slow cooker. (Psych!)

BUT THEN, NO. In a flashback, we see that George and Sally were neighbors to a young Jack and Rebecca, and George gifted them the slow cooker. “You have to fiddle with the switch, but it still works,” he tells a very pregnant Rebecca and Jack, and they’re happy to have it. But that slow cooker catches on fire all those years later, and over a montage of the Pearson family’s happy moments, we see flames start to consume the house. 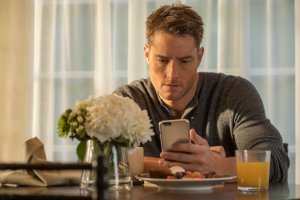 MEET THE NEW SUPER | Kevin wants to hang with Randall, but his brother turns him down: He and Beth are headed to the apartment building they apparently bought. Randall declares “Do some good, don’t go broke” is the motto of the newly formed R&B Properties, but Beth seems less gung-ho about the venture. And at a meeting with tenants, Randall excitedly starts promising that he’ll fix everything for everyone, prompting Beth to give him The Eyebrow. But before they can hash much out, Kevin shows up and pulls focus. Like always.

Afterwards, Randall acknowledges that he didn’t slow his roll like he promised — and Sterling K. Brown does an excellent, if brief, impression of Susan Kelechi Watson — but Randall knows that he CAN do everything he promised. She’s clearly miffed, and he knows it, as she leaves for work. So bare-armed Kev and Randall unleash the gun show start making good on all of the repairs that the residents request. (Kevin’s knocking down of a wall, complete with female residents pulling up chairs to watch, is hilarious. Also, hi A Different World‘s Dawnn Lewis!)

But when one of Randall’s repairs uncovers a giant cockroach problem, the residents need to be relocated for a few days until the exterminating company can do its thing. As Randall goes back inside to collect Kevin, it’s hard for The Manny to stop work: Like we saw Jack do earlier in the episode, he’s trying to keep busy to stay sober. Also, he notes, he’s trying to make amends and there are some people to whom he just can’t do that.

The conversation soon turns to how they’re growing older, how Jack died young and how he’s already been gone “longer than we had him,” as Randall notes, the realization of which gives Kevin pause. But he recovers, then bucks up his brother. “You’re going to be a great old man, by the way, like your other dad.” It’s sweet.

When Beth arrives at the hotel where the residents are staying for the night, she reminds him that her life’s work has been working with properties like the one they bought, so he might want to listen to her. Properly chastised, he apologizes.

DOG DAY AFTERNOON | After Kate finds Toby looking at dogs on Petfinder, she visits a local shelter and — thanks to the help of a shelter worker (hi, Master of None‘s Lena Waithe!) —

finds a beautiful pup named Audio to adopt. At the last moment, though, Kate realizes that the dog “comes with a lot of baggage” and, crying, backs out of the adoption.

At home, Kate tells Toby what happened at the shelter, describing Audio as “crazy cute, like if-Jacob-Tremblay-was-a-dog cute.” Ha! She tells him she backed out of the adoption… then turned around and went back, because she knows how happy having a pooch will make Toby. And it does. And for the record, that dog IS insanely cute.

Kevin waits outside Sophie’s door, but she’s not happy to see him. “If you really want to make amends, just leave me with something. Just leave me with the past,” she says, fighting tears. “Let me remember you at 10 or at 17 or 20. Just let me remember you when it was good.” OUCH. But he says she wasn’t just a name on his amends list, “You were the name.” It’s heartfelt, but it doesn’t change her mind; she bids him goodbye and goes inside, alone.

MAKING AMENDS | Back at his mom’s house, Kevin opens an envelope and finds his pendant, sent by Charlotte, to whom he wrote a letter of apology. Yay! But there’s still a name left on his amends list: Dad. And just seeing it makes Kev cry.