If only the Pearson family had watched a little more Sesame Street!

Children of the ’80s who spent enough time with the PBS broadcast will remember an animated short that emphasized repetition in order to jog memory. (Say it with me now: “A loaf of bread, a container of milk, and a stick of butter.”) And while this week’s This Is Us wouldn’t have been very compelling had Jack and Rebecca uttered no other dialogue outside of “a suit for Kev, a dress for Kate, and a pack of batteries,” that last item on the list might’ve saved them a lot of heartache in the end.

Sure, various other developments play out in the hour, titled “Clooney,” and we’ll get to them in a moment. But that last shot of the Pearson family’s smoke detector, which urgently needs a battery replacement, has me spun. Might all of the heartache have been avoided?!

MALLRATS | In a flashback set just after Kevin hurts his leg in high school, Kate asks Rebecca to take her to the mall so she can get a dress for the winter formal. The outing soon turns into a family affair: Jack needs a new suit to impress his lame boss, and he then decides Kev needs one, too, in order to attend the school dance and stop feeling sorry for himself. And Randall wants to come along, as well: He’s doctored a Magic 8-Ball to help him ask out a redheaded friend who works at one of the shops. It’s super cute

At the shopping center, Kate tries on dresses in a range of sizes but winds up leaving the store angrily without telling her mom. And when Rebecca finds her, Kate is surly and dismissive. We later find out that it wasn’t because she couldn’t find something that fit — in fact, the size 7 zipped right up, no problem — but because Kate was so used to feeling bad about her weight that she insisted on getting upset that the size 5 was too tight. (Side note: We’ll explore this more later on.)

Kevin and Jack run into Miguel, who is bummed that his ex-wife Shelly has gotten engaged. Jack starts in right away with a pep talk, but Kev points out that sometimes, a guy’s just gotta wallow. So they go down to the food court, where they (and Randall) drown their sorrows in wings and where Miguel informs the boys that their dad once wanted to start his own construction company.

At home, Jack confesses to Rebecca that he wants to try Big Three Homes again — despite his insistence to Kevin earlier that it’s too risky an endeavor to launch just as all of the teens are about to enter college. And Papa Pearson acknowledges that it’s not the right time. “I guess that’s going to make it pretty exciting, isn’t it?” Rebecca replies, smiling, and they kiss. “Hey baby, did we forget something at the mall?” she asks idly, and he says he doesn’t think so. And then the camera offers us the episode’s final shot: The Pearson family entryway smoke detector, which is missing the battery Rebecca asked Jack to help her remember when they set out for the mall at the start of the hour. That feeling in your stomach isn’t because you ate too many Wetzel’s Pretzels and sucked down an Orange Julius* too quickly, This Is Us fans: Yep, this seems like a big nod to the idea that Jack’s death might — might — have been prevented. (*If these don’t work for you, feel free to replace with whatever mall food staples you remember from your youth) 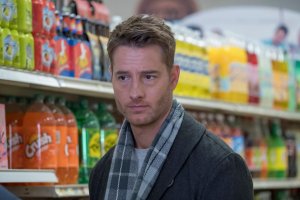 MIGUEL MANS UP | In the present, as Kev prepares to leave rehab, therapist Barbara worries that a return to Los Angeles might not be the healthiest idea for him right now. And he agrees, which is why he’s planning to crash at Rebecca and Miguel’s place for a while.

Rebecca is happy to have him there, and they have a nice moment at the grocery store when Kev admits that he lost Jack’s necklace and can’t get it back. She makes him feel a little better by telling him she can’t seem to take off the pendant Jack gave her, even though it’s been such a long time. But tensions haven’t eased all that much between Kevin and his stepfather, as evidenced by Kev’s blunt question about why Miguel decided to hone in on the mom/son grocery run. But watch out, Kev, because Miguel is about to own you a little. “I’m here to protect her from any other bombs you might drop or any other blame you might want to lay on her,” Miguel says, referencing the really rough therapy session from the previous episode. And when Kev says he wouldn’t hurt his mom because “I’m her son,” Miguel shoots back, “And I’m her husband,” and then Kev goes for the kill by replying, “My father was her husband.” Ouch.

The two men apologize later, and tensions ease considerably after Miguel says he was never in love with Rebecca when Jack was alive. “That would’ve been impossible,” he promises. “Your mom and dad, they were one… It never even occurred to me, ever.” Kevin is comforted by that, which is good, but Miguel also kindly yet firmly reminds him that he loves Rebecca now, and “I’m not going anywhere.”

But wait, what’s this? I might actually be getting out of this episode without an ache lodging somewhere in my chest? Score! Oh, hold on, Rebecca’s got one more scene.

Kevin asks his mom if she’s happy with Miguel, and her answer quietly kills me. “After your father died, I had to let to go of a lot of things, and happiness was one of the first things to go. And it was like that for a very, very long time,” she says matter-of-factly. Her relationship with Miguel, she adds, is “quieter and older, but yeah. I’m happy.” 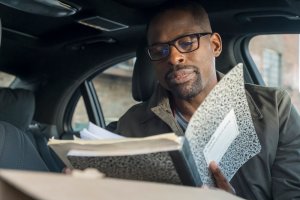 RANDALL’S ON THE CASE! | Beth is slightly concerned that Randall doesn’t seem to be taking an upcoming job interview seriously. He counters that he wants to find something “that gets my juices flowing” the way that foster-parenting did. And anyway, he’s super preoccupied with picking up a box of William’s stuff that was delivered to his old apartment.

When he procures his dead father’s effects, Randall finds a composition book containing some of William’s later poetry. One ode, written in 2011, is addressed to a “Lady” he apparently hung out with a lot. Randall can’t let it go, so he knocks on doors to try to find the woman, to no avail. But when he chats with the building’s superintendent, she lets him into William’s old digs and urges him to look around: That’s when Randall realizes that his dad wrote the poem for a mural of Billie Holiday — whose nickname was Lady Day — that covered the wall of the building opposite his window.

Inspired, and taking into account Beth’s frustration that her job so infrequently allows her to help the people she always dreamed she’d help, Randall drives his wife out to William’s building and tells her he wants them to buy it so they can “change lives” and provide “comfort and dignity” to the people who live there. As he’s giving his pitch, we pan up to see William’s cat Clooney (whom we’ve seen run around the city throughout the episode) getting fed by a young boy. 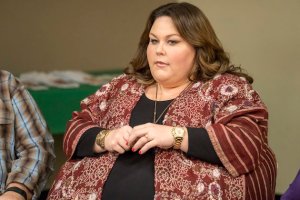 EVERYONE IS SAD AND MESSED UP! | Kate returns to her weight support group, alerting them to her recent junkfood fest and saying that finding a wedding gown for her spring nuptials is going to be another “hurdle” she’ll have to handle. Afterward, Madison approaches her and kindly offers to help her find the perfect dress. I feared this was going to turn into a “Kate gets fat-shamed while searching for her wedding dress” storyline, and I’m pleasantly surprised when it’s merely a “skinny girls have eating problems, too” storyline. And that, in a nutshell, is exactly how much This Is Us has broken me.

When Madison downs a bunch of macarons at the boutique, then excuses herself to go to the bathroom, Kate knows what’s up. But afterward, when she gently confronts Madison about being bulimic, Mads gets angry and takes off… only to call Kate, crying, later that night. Turns out that Madison got home, binged, purged and then got dizzy and passed out, hitting her head on the way down. As they chat afterward, Kate commiserates by saying that she was borderline anorexic in the months just before her dad died. But when she lost a bunch of weight, she realized, “I was more comfortable being fat, because I actually liked being mad at myself all the time,” she says, explaining the complicated dressing-room freakout she had at the mall back in the day.