You might not think that you’d ever hunger for the comic relief of seeing a grown man wear a diaper, but by the end of this week’s This Is Us, that visual becomes comedy manna to your heartsick soul.

It probably helps that the man in question is the abs-blessed Kevin, who dons the ridiculous (and skimpy — did we mention skimpy?) costume as part of his “very special” return to The Manny. But really, any cause for laughter is a welcome one after a heavy hour that focuses on Jack’s struggle to keep his promise to stop drinking.

Read on for the highlights of “A Manny-Splendored Thing.”

AN ALTERNATIVE VIEW | Jack and Rebecca are in the car, arriving home after he admitted he’s an alcoholic and she told him they’d fix it together. “You kicked this once, you will kick it again,” she says, asking him how he stopped drinking the last time she asked. That launches a flashback-within-a-flashback, as Jack remembers the night chronicled in Episode 2 of the first season, when Jack came home loaded and bearing jewelry, then wound up sleeping outside Rebecca’s door “like a Labrador” all night.

In the afternoon that preceded that fight between Mr. and Mrs. Pearson, we learn that Jack’s drinking wasn’t just about having a few too many at the bar with Miguel. As a coping mechanism for the work piling up on his desk and the pressures of his growing family, we watch Jack liberally and secretively spike his coffee at work (oof). Judging by the amount of liquor in the bottle, this isn’t the first time he’s done so. Then we see him slurring about how great Rebecca is to the jeweler who sold him the quarter-moon pendant. Then he arrives at home, where Rebecca angrily instructs him to “be a man” and fix his situation.

And yes, there’s the very sweet “I’ll be a 12, for you” speech he gives, which ends in kissing and her accepting the necklace and the kids jumping on top of their parents as they kiss. But moments later, Jack’s boss calls to rip him a new one, and the Big Three start arguing amongst themselves, and we’re quickly back to real, tough, messy life. 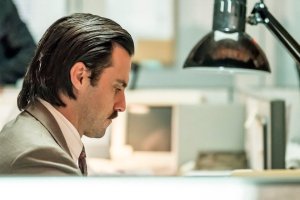 DADDY’S LITTLE GIRL | As Jack’s Inception­-flashback continues, we learn that it’s the day of the school talent show. Kevin plans to do his Mr. T impression on stage. Randall is trying out some yo-yo tricks. And Kate is going to sing “Lean on Me,” but Rebecca’s well-intentioned obsession with trying to perfect her daughter performance grates on the girl a little.

Meanwhile, Jack turns down a co-worker’s offer of a liquid lunch but then can’t bring himself to do more than hover in the doorway and then flee from a nearby Alcoholics Anonymous meeting. He winds up driving to his kids’ school. Kate, outside during lunchtime, spots her dad and wonders why he’s around. “I just needed to see you,” he says, and she picks up on the forlorn note in his voice. They commiserate about how his boss and Rebecca are tough on them sometimes, then she puts her hands on both sides of his face and says, “It’s gonna be OK.” He is touched. She goes back to school.

At home, Rebecca lovingly cuts down the dress she wore the first time she sang in public and makes it into an outfit for Kate. My first fear (that it won’t fit) is not realized, thank goodness, but Kate’s joy at her mother’s gesture dies after hearing Rebecca crank out a perfect rendition of “Lean on Me” while singing to herself in the shower. Thinking she won’t be able to match Rebecca’s vocal abilities — and/or her expectations — Kate pleads a sore throat and winds up sitting in the audience with her folks. (This, of course, will have relevance later in the episode.)

WHITE BLOODY KNUCKLING IT | But wait, where’s Jack while the talent show is beginning? He’s tossing his desk booze into the trash and whaling on a punching bag at a boxing gym as a way to channel his feelings about his father, his war experiences and other assorted hurts. Papa Pearson makes it to the event just as Kevin is A-Teaming it up; it should be noted that his theatrical skills have certainly grown over the years, though a young Sophie sitting in the crowd is tickled by his performance.

The flashback ends and we’re back to still-maybe-a-little-drunk Jack sitting at the foot of the bed as Rebecca wakes up the morning after she brought him home. “I kept it to myself last time, but it can’t be like that again,” he tells her, and she agrees. Then he goes to Kate’s room to confess that he has a drinking problem, and his dad did, too. “I kept that hidden from you guys because I didn’t want you to know that about me,” he says, but before he’s even done talking, she’s planted her palms on each side of his face, and it breaks him. (Side note: Damn, Milo Ventimiglia, this scene is killing me and you are killing it.) He says he needs her and her brothers, and they hug. Later, Rebecca drives Jack back to the AA meeting, and he attends. 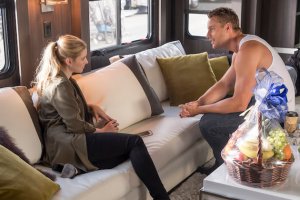 THE SCENE OF THE FREAKOUT | In the present, the entire family assembles in Los Angeles to attend a taping of The Manny. Kevin has been asked to come back for an episode, and in his trailer, Sophie is amused as he obsesses about his midsection and frets that he’s got to prove that he’s moved on and is a bigger talent now. “I need it to go like when George Clooney returned to do that last episode of ER,” he says earnestly. “I need people to love me the way they loved Clooney.” She smirks. “This is your least attractive side. You know that, right?”

Rebecca and Miguel are staying with Toby and Kate, a situation that throws Kate into a manic state as she worries that her mom will have a critical comment about every aspect of her life. Meanwhile, Toby just wants Kate’s mom and stepdad to like him, given that all they really know about him is “I’m a guy who has heart attacks and falls through coffee tables,” he notes. Kate resolves to be an adult, but the start of the visit goes pretty much the way she predicted it would.

RANDALLING OUT | Meanwhile, Beth is not a fan of The Manny or Kevin’s comedic stylings, the fact of which she repeatedly reminds Randall as she and the girls travel to California for the taping. She’s also confused about why her husband hasn’t filled out the paperwork for them to foster and/or adopt a child. There’s a lot of back and forth about it, but eventually the pair wind up leaving the taping before it starts and roaming the studio lot, where Beth presses her husband about why he keeps “Randalling out” over the adoption. He finally admits that the idea of bringing an older kid, aka someone who might have experienced abuse, into their family gives him pause. “Maybe we can’t handle this. Maybe we’re biting off more than we can chew,” he says. She replies that after lobbying so hard for adoption, he’s being ridiculous. He counters that she’s being reckless. Then Beth and her enviable manicure (seriously, I love that color) stalk off to cool down.

KATE IS NOT THROWING AWAY HER SHOT | Kevin’s family presence in the audience dwindles even more when Kate gets a call from a bar’s house band she applied to: The singer is sick, and can she fill in? She immediately accepts and leaves for the soundcheck, pausing only to nastily shut down Rebecca’s musings about her good ol’ days singing in bars. After Kate leaves, Toby says he’s going to go, too. Then Rebecca makes it clear that she’s got to be there for Kate’s debut, as well, and pretty soon it’s just Miguel, Tess and Annie in the crowd for Kev’s big night.

And maybe that’s for the best, given how Kev is freaking out about some last-minute rewrites — thanks to a vindictive Casey, aka the show scribe whose writing triggered Kev’s original on-set outburst. “This stupid show does not define you anymore. You came here to do a job,” Sophie reminds him, adding that he’s got to rise above it all and be the bigger man. Bolstered, he vows to “Clooney the hell outta this thing”… and then he winds up wearing an adult-sized diaper in the episode as he and a child actress look for the series’ missing baby. (You’ve got to think like a baby to find a baby, see?) Kev may be humiliated, but the audience loves it.

After the show, Kevin finds Beth in his trailer. Once he finds out what’s going on between her and Randall, he points out that “my brother doesn’t attempt anything unless he knows he’ll succeed at it.” And then he reminisces about the only time Randall risked failure: when he was 19 and decided that he wanted to date Beth, even though “he had no shot in hell at her,” Kev says. He reveals that he was “Cyrano-ing the entire thing” the first time Randall called his future wife to ask her out, and Beth is mortified. “You, Beth, fell for The Manny’s game,” Kevin teases her. “Now you just sit there and think about that for a second.” (Ha!)

Beth finds her man wandering the lot with Annie and Tess, jumps on him and kisses him good in front of their daughters, then assures him, “We can do this.” Bolstered, Randall announces to the girls that they’ve got some news to share.

A SOUR NOTE | That leaves us with Kate’s gig, which goes great — she sings Fleetwood Mac’s “Landslide,” and it’s well-received — but all she can do afterward is blame Rebecca for ruining the evening by being so annoyingly ideal. “You have perfect pitch even when you talk,” Kate says. “You wanted a daughter like you, and I was never going to be you… you wanted me to be the you that you never became.” A flustered Rebecca turns to Toby for support after Kate storms out, but Tobes informs his future mother-in-law that he is “Team Kate for life” and not likely to take her side. (Side note: Again, the sentiment here is A+, but the delivery makes me want to shake the character. A little more respect for your lady’s good-intentioned mom, maybe?)

But what the heck do I know? In the car, Rebecca touches Kate’s shoulder and mentions that “I’ve realized, I really like your fiancé.” The tension is broken, at least for now, and the trio drive home in relative peace.

Now it’s your turn. What did you think about the episode? Sound off in the comments!