Need to catch up? Check out the This Is Us premiere recap/post mortem here.

This Is Us‘ second installment is a relief. It continues with the same heart and humor displayed in the premiere, delivering warmth and comfort as handily as though it were a bowl of matzo ball soup fresh out of the kitchen. On the whole, the hour gives us more detail on the drama’s central family, allows Kate to cut loose a little and sticks not one but two characters in some seriously dopey haberdashery.

But, as a child of the ’80s, I would be remiss to let one thing slide: In the name of all that is Ecto Cooler and holy, what the heck is “Top-C?”

We are introduced to the juice-box brand — which is clearly intended to evoke Hi-C, aka the nectar of my youth — as Rebecca makes lunches for her three kids, who are in elementary school in this week’s flashback. I’m sure the change is probably because the show couldn’t clear use of the brand name (though it did for Crockpot, G.I. Joe and other hallmarks of 1980s suburban living), but c’mon. Was Capri-Sun unavailable? Hawaiian Punch? Heck, even Five Alive?! (Just kidding. Nobody liked Five Alive.)

Read on for the non-trademark-infringing highlights of “The Big Three.”

‘BIG THREE!’ | We open on a flashback to the family’s kitchen, where Rebecca is bustling around, trying to get breakfast on the table and lunch boxes packed. When everyone comes down to eat, we see that Kevin, Randall and Kate are a lot older than when we first met them — I’d estimate they’re 8 or 9 — and that there’s a simmering tension between Rebecca and Jack.

Breakfast is sugary cereal for the boys and cantaloupe and cottage cheese (aka ’80s diet food) for Kate, a disparity that Jack tries to ease by sprinkling some of the cereal on top of his daughter’s dish… much to Rebecca’s dismay. Guys, I have to be up front here: We’re only on Episode 2, and Kate’s history with weight/food/body image already too closely mirrors my own. I may need someone to hold my hand through this season.

The flashbacks, interspersed through the hour, inform us that Jack and Rebecca’s marriage is creaking a bit under the strain of raising three kids. The main way this manifests is in him spending too much time at the bar after work, pounding bourbon with his best friend, Miguel (Castle‘s Jon Huertas). Miguel gently warns Jack that Rebecca is “the gold standard of wives” and that “You married way, way above your station. I’d be careful not to give her a reason to notice.” And if that sounds like the nicest, only-platonic-no-way-there’s-anything-else-going-on-here thing you’ve ever heard a bro say about his bro’s lady, may I suggest you stick around until the end of this recap? (Actually, how about you do that, regardless.)

Meanwhile, at school, kids have started calling Randall “Webster” — as in, the sitcom where a white family adopted a black kid — and Kevin cares too much about what the other kids think to stand up for his brother.

KEEPING SCORE | When Jack comes home buzzed and bearing jewelry one night, Rebecca quietly but firmly demands that he cut back on the booze and the late nights at the bar, because on a parenting scale of 1-10, with 10 being the best, “I think we’re at a 6, and I think I’m being generous,” she says. She explains that she’s putting in 9-level work, and “I’m done letting you lower our score.”

Jack spends the night sleeping outside their bedroom door “like a Labrador,” she notes with affection the next morning. He begs her forgiveness as he promises to give up alcohol cold-turkey, adding he’ll be a “12, for you,” and putting the necklace — a quarter moon pendant — around her neck. The kids wake up to find their parents making out on the hallway floor, and that sounds gross, but it’s cute as the trio piles on and there’s laughing and smiles and I’M SURE THERE’S NO MARITAL HEARTACHE WHATSOEVER AHEAD. 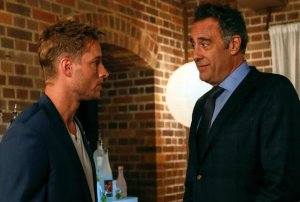 ‘THE NETWORK OWNS YOU’ | In the present… Kevin, no. Just, no. Being pretty and earnest doesn’t mean that you can wear stuff from the Urban Outfitters clearance bin on your head. Take off that stupid ski cap. No one at your agent’s office is going to get serious about a discussion of your career prospects if you look like the kid in the freshman dorm who knows the best weed hook-ups.

Kevin expects an exciting examination of how to angle his future, post-his Manny freakout. Kevin gets some come-to-Jesus real talk from his agent, Lanie (Sons of Anarchy‘s Katey Sagal), who informs him that his contract means the network owns him for the next two years. Crestfallen, he realizes that he’s got to talk to the network head at a party at Lanie’s that night in order to grovel and get back to his Manny duties.

COCKTAILS AND CONTRACTS | Toby’s weight-loss efforts are going more smoothly than Kate’s, a fact that causes her great consternation. And when Kevin invites his sister to the party — so she can buck him up when he tells the network he definitely wants out of his contract — the stress over finding something to wear manifests in Kate going off on her fellow Overeaters Anonymous members. Or, as Toby puts it: “You Hulked out on a bunch of fatties.” (Heh.) While making it clear that he wants to be her boyfriend for realsies, he says he’s going to the party with her and they’re going to have some “non-fat time” where they can just cut loose and relax. 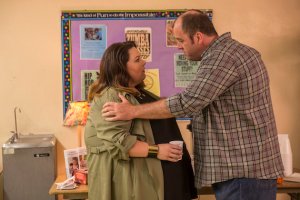 So they do. The pair toss back shots and hit the dance floor at Lanie’s party, and Kate enjoys herself for all of 90 seconds before she looks around and thinks everyone’s laughing at her. They are likely laughing at your date’s saddle shoes and hat-peacock feather combination, honey, but that’s neither here nor there. But Toby refuses to let her wallow, so they start imbibing tequila like it’s their calling.

MANNY… IN | Meanwhile, Kevin meets with the network head — played by Brad Garrett (Everybody Loves Raymond) — who calmly tells him that “I really don’t care what happens behind the scenes on my third-rated sitcom” but that replacing the lead of a moderately successful show is the kind of drama he’d rather avoid. So, the bigwig adds, Kevin will finish out his existing contract or “I’ll be forced to Nagasaki your life and career.” Ouch. The one upside of this chilling conversation is the inebriated shuffle that Kate and Toby do as Kevin tries to explain his current effed state. Bravo, Chrissy Metz. You drunk dancing is all of us drunk dancing. Also? Sloshed Kate = fun.

Later, Kevin is near tears as he calls Randall. It’s clear the two aren’t as close as Kate and Randall are, but there’s hope. (Sample dialogue — KEVIN: “I was not a very good brother to you, was I?” RANDALL: “No, you weren’t. But you’ve still got time.”) As Randall warms to his brother, he reminds him that “Mom and Dad didn’t raise no whores, except briefly, during Kate’s eyeliner phase.” (Ha!) Then they both — along with Kate, who wanders over during the conversation — recite a cheer about triplet-hood their dad used to chant with them when they were kids. Would this happen in real life? Probably not. But I Do Not Care.

Later, Kate sobers slightly and gets sad as she tells Toby that she can’t ever stop thinking about her weight. And he understands. Then Kevin announces that “I told them to go screw themselves” and muses a future in theater (aka the only acting medium he’s now legally able to pursue). 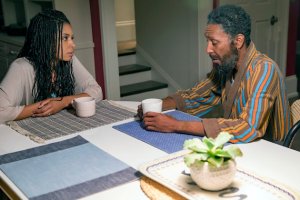 FOR REAL: WHO IS YOUR DADDY? | At Randall’s house, Beth is starting to wonder what the “endgame” is regarding William, but Randall wants them to take it slowly and figure it out later. It’s clear the girls are smitten with their grandfather (whom they don’t know is their grandfather), and Randall is going out of his way to set up doctor’s appointments and the like to deal with William’s Stage IV stomach cancer. But when William starts asking to borrow bus fare and then disappearing for the better part of every day, Beth begins to worry that his presence in their house won’t be good for the family — Randall, in particular. So she sits the old man down and point-blank asks him if he’s really sick, if he’s using drugs, and where he goes when he leaves during the day.

The answers: yes, no and his apartment in Philadelphia. Randall enters the conversation just as William says, “I have a cat… I go back and forth to feed him.” No, YOU thought William was some kind of slick con artist/grifter! He adds that even though he’s been given a literal death sentence, he feels so much better now that he’s able to hang out with the girls. “Well, now I feel like a bitch,” Beth says, and the two men laugh. I’m interested to see how the Beth-William relationship plays out as the series progresses, because that look she gives him the next morning when he helps one of the girls with her asthma inhaler isn’t 100 percent “Thank you, God, for bringing this reminder of life’s fragility into our midst.”

Anyway, the doorbell rings, and the girls go to get it. “Grandma and Grandpa!” they shout, and the camera moves to the entryway to show us Rebecca — wearing the moon necklace — and… Miguel. Wait, what?