Come October, all eyes will be on ABC’s Roseanne-less re-relaunch of Roseanne. The sitcom will return without its disgraced leading lady and now be known as The Conners. The offshoot, first announced in June, will pick up following a “sudden turn of events,” as “the Conners are forced to face the daily struggles of life in Lanford in a way they never have before.”

Having already contemplated potential Roseanne exit strategies and new storylines for the remaining family members, it is now time to ponder the spinoff’s potential for ratings success by asking you to join the guessing game. But first, let’s remind ourselves how Roseanne 2.0 fared during its first (and only) season:

* The revival debuted to yuuuuuuuge numbers back in March, amassing 18.4 million total viewers and a 5.2 in the coveted 18-49 demo (in Live+Same Day numbers).

* By season’s end, Roseanne‘s numbers had come back down to Earth, with the season finale aka Episode 9 drawing a 2.5 rating with 10.6 million viewers — still a great number in this day and age. 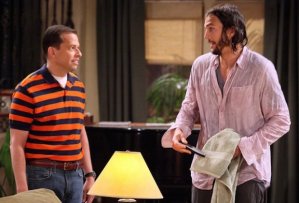 There’s recent-ish precedent for a hit sitcom finding success without an original star. Two and a Half Men famously axed Charlie Sheen back in 2011, then returned to a whopping 27.7 million total viewers and a 10.3 rating — doubling Sheen’s on-camera swan song. Those numbers didn’t hold, of course, but the Ashton Kutcher incarnation performed well enough for CBS to eke out four more seasons.

Will ABC be so lucky with The Conners? During a recent interview with Fox News’ Sean Hannity, Barr gave her own prediction, suggesting the spinoff won’t come anywhere close to Roseanne‘s numbers.

And now, without further ado, we turn it over to you to predict the spinoff’s Nielsen outcome. Will Roseanne fans tune in for The Conners, or will this last-ditch effort to keep the show alive find about as much success as Dan Conner’s bike shop? Weigh in via the following polls, then hit the comments to back up your choices.