Don’t put that old couch in storage just yet: ABC has officially ordered a spinoff of the cancelled Roseanne revival, TVLine has learned — but without any involvement by original star Roseanne Barr.

The spinoff — tentatively titled The Conners — has received a 10-episode straight-to-series order, and is set to premiere this fall in Roseanne‘s former Tuesdays-at-8/7c timeslot. (No premiere date has been announced.) The show will not include Barr, whose racist tweet led to last month’s stunning cancellation. But the rest of the Roseanne cast will return, including Sara Gilbert (as Darlene), John Goodman (Dan), Laurie Metcalf (Jackie), Lecy Goranson (Becky) and Michael Fishman (DJ). Executive producer Tom Werner and showrunner Bruce Helford will return as well.

VIDEOS Sara Gilbert Addresses Roseanne Cancellation on The Talk: ‘I Stand Behind the Decision ABC Made’ 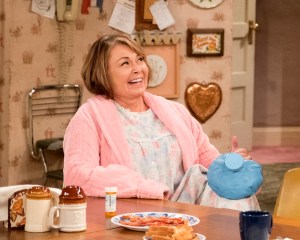 “Roseanne Barr will have no financial or creative involvement in the new series,” ABC made clear in a statement. An additional statement from Werner says he and Barr reached an agreement that allows Werner to produce a spinoff without Barr’s participation. Barr herself added: “I regret the circumstances that have caused me to be removed from Roseanne. I agreed to the settlement in order that 200 jobs of beloved cast and crew could be saved, and I wish the best for everyone involved.”

No word yet on how The Conners will address mom Roseanne Conner’s conspicuous absence, but the series description seems to imply that the character might be killed off: “After a sudden turn of events, the Conners are forced to face the daily struggles of life in Lanford in a way they never have before. This iconic family — Dan, Jackie, Darlene, Becky and D.J. — grapples with parenthood, dating, an unexpected pregnancy, financial pressures, aging and in-laws in working-class America. Through it all, the fights, the coupon cutting, the hand-me-downs, the breakdowns – with love, humor and perseverance, the family prevails.”

The Conners cast released a joint statement as well: “We have received a tremendous amount of support from fans of our show, and it’s clear that these characters not only have a place in our hearts, but in the hearts and homes of our audience. We all came back last season because we wanted to tell stories about the challenges facing a working-class family today. We are so happy to have the opportunity to return with the cast and crew to continue to share those stories through love and laughter.”

To recap: Roseanne returned to ABC this spring with big ratings, and was renewed for an 11th season, but got the axe after Barr tweeted a racist “joke” about Obama advisor Valerie Jarrett. Days after the cancellation, ABC began discussions about finding a way to salvage the show via a spinoff. (Gilbert came out publicly against Barr’s remark, calling it “disappointing, to say the least.”)