Darlene to the rescue? Roughly 72 hours after cancelling Roseanne amid controversy, ABC is looking to possibly keep the franchise alive with a spinoff centered on Sara Gilbert’s acid-tongued single mom, TVLine has confirmed.

The standalone Darlene series was one of five offshoots proposed by TVLine in the wake of Roseanne‘s spectacular fall on Tuesday. ABC could not be reached for comment. 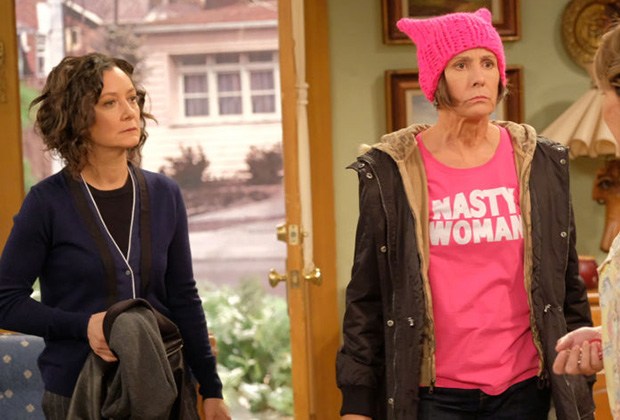 It was three days ago that ABC announced it was scrapping the series’ already-greenlit 11th season after its titular star Roseanne Barr tweeted a racist “joke” about Obama advisor Valerie Jarrett. In announcing the cancellation, ABC president Channing Dungey called Barr’s comment “abhorrent, repugnant and inconsistent with our values.” Gilbert, meanwhile, said she was “disappointed” in Barr’s actions “to say the least,” while showrunner Bruce Helford said he was “horrified and saddened” by the remark.

Barr was later dropped by her talent agency ICM Partners, and TV Land, Paramount Network, CMT and Hulu all announced that Roseanne reruns were being yanked.

Not only would a Darlene series solve ABC’s Tuesday-at-8 pm void, it would save the 200-plus actor/crew/writer jobs that were lost after the axe fell on Roseanne. Barr herself lamented the job-loss factor on Twitter.

“Don’t feel sorry for me, guys!!,” she wrote. “I just want to apologize to the hundreds of people and wonderful writers (all liberal) and talented actors who lost their jobs on my show due to my stupid tweet.”