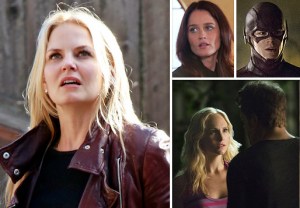 Will Once Upon a Time revisit Emma’s wild child days? Is The Mentalist engaging in sibling rivalry? Will it be slow and steady for Vampire Diaries‘ Steroline? Will The Flash pay the Piper? Read on for answers to those questions plus teases from other shows.

Everything seems so secretive with The Mentalist this season. If anybody can get us something meaty to go on, it’s you! Do you have something? –Nicki
I’d call this downright meaty: In Episode 7 of the coming season (premiering… at “midseason”), we will meet Lisbon’s two brothers. The younger one (early 30s), Jimmy, is a gambler being sought by the Feds (as a witness to a murder!), while Stan (late 30s) is a mild-mannered family man who miiiight know more about Jimmy’s sitch than he lets on.

Now that Scandal‘s Sally Langston has lost the presidential election, any intel on what will become of the former veep? –Dan
Good question – and one that might not be answered in full for a while. “I don’t know when I’ll be back,” Kate Burton told us at the #TGIF event. “It’ll probably be the second half of the season — that’s what they’ve told me — but [Shonda Rhimes] might change her mind and say, ‘No, we’re going to do something next season.’ Who knows.” But whenever the time comes, expect juicy stuff. Says Burton with a smile, “I mean, how can Sally Langston not be juicy?”

What’s the status of Mellie and Andrew’s relationship when Scandal returns? –bevoette
It appears their red-hot affair has cooled off considerably, in the wake of the First Family losing a child. “Andrew is not at peace with where things stand with he and Mellie,” Jon Tenney says. “That being said, at the end of last season, Mellie and Fitz just lost their first child, and so I think romance may not be the first thing on her mind.” As Bellamy Young herself tells is, mourning Mellie “is in a whole new place, an uncharted, unprecedented wilderness for her.”

Do you know if The Flash is looking to introduce any more of the Rogues from the comics? – Andy B.
In addition to the likes of Captains Cold and Boomerang, at midseason we will also meet Hartley, a onetime mentee of Dr. Wells’ who lost his hearing in an accident and now is out to wreak havoc with an invention of his own. (Of course, you may know Hartley — who happens to be gay — as the Pied Piper.)

RELATED Once Upon a Time: Dancin’, Romancin’ and More Season Premiere Teasers

Is Once Upon a Time planning any flashbacks to Emma’s life in the foster system? –Marissa
I can’t confirm they cover her time as a foster kid specifically, but we will get a good, long look at a younger Emma (likely played by a different actress). And as Jennifer Morrison teased for me, “There is a bit of a curveball in the flashbacks that I did not see coming, one that definitely adds a layer of suspense to how all of the puzzle pieces fit together.”

I see everyone asking about a lot of relationships on Once Upon a Time, but they never ask about Regina/Snow. Will their relationship continued to be explored? –Ana
You’re in luck. Ginnifer Goodwin told us at the premiere party that fans such as yourself “will be very satisfied, because we do have many more scenes between the two of us. Lana [Parrilla] and I actually call the [producers] on a regular basis thanking them and asking them for more, because I personally find those scenes to be very powerful. The dynamic between them is so rich and we love exploring it.”

The Vampire Diaries‘ Stefan and Caroline make an awesome friendship, so it’s very disappointing that rumors say they will become romantically involved. Is there any hope that they can remain platonic? –Scarlett
For what it’s worth, whatever might be blooming between the two will evolve slowly, given their respective track records. “We’re just seeing layers of it,” says exec producer Caroline Dies. “I think Caroline’s not even realizing how deep her feelings are. She just feels hurt and lied to and ignored [by Stefan, who’s not returning her calls].” Mr. Salvatore meanwhile ” can’t even process or fathom the idea of another heavy, emotional connection. In his brain, he hasn’t even opened up his mind to the notion of dating someone or being with someone, actually having a true romance with someone. So it’s a very slow build for them.” Adam DeVine again on this season of Modern Family? –Andy
I can confirm that “Andy the manny” resurfaces in the Oct. 8 episode, in which Phil has to creatively edit Mitch and Cam’s wedding video upon realizing that it reveals that he is responsible for a horrible cold that has plagued the family.

Have you got anything on how things are with Mary and Francis when Reign comes back (on Oct. 2)? –Bree
In the season premiere? Distant. Francis is off with Lola, trying to protect them, while Mary is trying to avoid the plague in the castle. But once he returns home, things could be looking up as Mary “spends a lot of the first three episodes naked,” star Adelaide Kane reveals. “We’re sexy this season.” However, the whole Lola/baby situation will make things “awkward” around the castle for everyone involved.

I was so surprised that Lucy Lawless’ character died in the Agents of S.H.I.E.L.D. season premiere! Is there a chance to see her in any of the following episodes? Or is there any chance to watch Lucy on other shows, like Parks and Recreation? –Natalie
Sorry, but plan to be Hartley-broken – that was Lawless’ one and only appearance. As for returning to Pawnee, she discussed that in our Q&A.

Got a scoop about the “guy that kills bad guys” aka Peter Quinn on Homeland? What’s going on with him? –Ricky
As made clear in the Season 4 premiere (airing Oct. 5), Quinn would rather you not remind him of that reputation. He’s kinda fried by the events of Season 3 (including but not limited to what he did to that poor kid), and as such will endeavor to pull Carrie out of the all-too-often needlessly deadly spy game. And that concern her may pave the way for a new… closeness. As show boss Alex Gansa said to me, in recounting the important people in Carrie’s life nowadays, “She’s got a burgeoning relationship – although not romantic, yet – with Peter Quinn.”

As much as 2 Broke Girls’ Max has referenced her mom, I’m surprised she hasn’t surfaced yet. Any ideas when we’ll finally meet her? –Johnny
Because Max’s mother is “such a giant, off-camera icon to me,” exec producer Michael Patrick King is in no rush to give her a face. Though it sounds like he’ll stop just short of that. “This season, in the first couple episodes, you will get a little glimpse of her. Not necessarily a visual glimpse — but something abstract. A tease,” he shared with us. “She’ll become a little more real every season.”

Any word on when British songstress Foxes (aka Louisa Allen) will make be making her appearance/acting debut on Doctor Who? –Ryan
That would be in Episode 8 of the new season, airing Oct. 11.

Any timetable update on Saving Hope‘s return in the U.S. via ION? –Anthony
Season 3 might not hit the States until 2015, I am hearing.

Is that the Morgan Freeman who is a producer for Madam Secretary? What’s the connection there? –Jen
Yep, it’s the Morgan Freeman, who had been working with producer Lori McCreary to find just the right show to develop for CBS. “I do have time — not too much time — to get involved in other things, and I have always wanted to have a hand in telling the American story, so this is how I do that,” he explained at press tour. And before you ask, no, he has no immediate plans to appear on camera on the series.

Will we ever see what becomes of McGee’s dad on NCIS? Last we heard, he had Stage 4 cancer. Will that be addressed? –lwild
Though show boss Gary Glasberg had indicated to me a desire to revisit that thread during Season 12, as of this past Monday, when I spoke to Sean Murray, McGee’s portrayer had “not yet” heard of any concrete plans.

Real questions, real answers. If you need the Inside Line on a favorite show, email InsideLine@tvline.com! (With reporting by Vlada Gelman, Michael Slezak and Scott Huver)