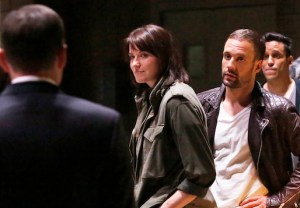 When last we tuned into Marvel’s Agents of S.H.I.E.L.D., the titular organization had crumbled, its name disgraced, assets depleted. In the wake of a HYDRA-fueled onslaught, Nick Fury (guest star Samuel L. Jackson) resurfaced to appoint Agent Phil Coulson (Clark Gregg) as Director, so that he might rebuild S.H.I.E.L.D..

To do that, Coulson and his bruised team of agents will need the occasional helping hand — the first of which, as Season 2 opens this Tuesday (ABC, 9/8c), belongs to genre-TV queen Lucy Lawless.

Here, Lawless previews her S.H.I.E.L.D. visit, reveals a crush on Coulson and ponders the outcome of a clash between Agent Hartley and a certain Warrior Queen.

TVLINE | So, it S.H.I.E.L.D. the most super-secretive show you’ve ever worked on or what? Things have changed since the Xena days. TV’s a lot more tight-lipped.
Yes, for sure, for sure. I suppose because you can transmit so much information at the flick of a button. They have to be much more careful with transmission of all kinds of information, but yeah, it’s unparalleled.

TVLINE | Tell me, under what circumstances do we meet Miss Isabelle Hartley?
Well, S.H.I.E.L.D. has been smashed by the treachery of Ward, who’s revealed himself to be a double agent and now Coulson has to pick up the pieces. You get to see globally how many agents they’ve got and the one person he feels he can trust to spearhead this move is an old friend, Isabelle Hartley.

TVLINE | Does she hold Coulson in high regard? Does she feel he’s up to snuff as director?
Yeah. I think she likes him a lot. She doesn’t like many people. She likes him. And she likes her team, but there’s friction with [Coulson’s] guys because they’re so slick and we’re so rag-tag, but she’s like, “Deal with it.”

TVLINE | Well, who are Agents Lance Hunter (played by Nick Blood) and Idaho (Wilmer Calderon) to her?
Lance Hunter is like her favorite nephew. He’s played by Nick Blood, who’s just incredible, a terrific actor. Hunter is in it just for the money, so he’s a bit confused by Isabelle’s adherence to Coulson’s wishes, but she and Coulson go back a long way. I think they’ve really been in the trenches together and whatever side he’s on, she’s on. Idaho is a valued member of her team, someone she has mentored. He’s got skills. Mad skills.

TVLINE | [Showrunner] Maurissa Tancharoen at Comic-Con teased something about a knife always in close proximity to Isabelle…?
Oh, yeah. You never know when you might like to slice some cheese… or worse. She has the air of a Middle Eastern journalist, one of those people who thrives on danger, and we’ll see if she’s bitten off more than she can chew, because HYDRA is incredibly awesome.

TVLINE | What else might we learn about her? Any personal backstory? In the comic books, she had a little something going on with Agent Hand, who’s dead on the TV series. Is that alluded to at all?
You’ll have to ask Maurissa and Jed [Whedon] whether they’re going to explore that. I can’t tell you at this point. TVLINE | What about this: Who would win in a fight between Isabelle and Xena?
Oh, Xena.

TVLINE | But once Xena breaks out the chakram and knocks the gun out of her hand, all bets are off.
Yeah, Izzy won’t even hear it coming. No, the main difference is that Izzy is a part of the team, whereas Xena can go it alone.

TVLINE | Are we going to get to see you back on Parks and Recreation during its farewell season?
Oh, I hope so. I hope so….

TVLINE | Have you enjoyed getting a taste of that lighter fare there?
I loved that very much. It’s a very special world, and I was very honored to be part of it. And Nick Offerman, what a prince of a man! All of them. Amy Poelher is one of the greatest producer/actor/writers there is. She’s the one that sets the tone for everyone else, as Clark [Gregg] does on this show. He’s so incredibly humble that it sets a great tone for the younger actors, to see how it’s done with grace and humor and intelligence. He’s a lovely man. I fell in a little bit of love with him. Between him and Patton Oswalt (as Agents Koenig), it’s just too much.

TVLINE | Give me one last taste for what people can expect from S.H.I.E.L.D.’s season premiere.
You get to see the magnificence of HYDRA and what our team is up against. It’s like S.H.I.E.L.D. represents humanity and HYDRA’s this sort of massive, amorphous evil, so you get to see humanity fighting back with all its wiles and its brilliance and its adaptability — like cockroaches, we will not be beaten. We will survive. We will go on. You get to see the awesomeness of human ingenuity with S.H.I.E.L.D.

TVLINE | There’s also a cool “gifted” in this episode, right? The Absorbing Man?
Oh my God. Yeah, you get to see the incredible Absorbing Man (played by Teen Wolf‘s Brian Patrick Wade). Don’t you remember that character from the comic books as a child? What an epic concept. And that’s part of the awesomeness of HYDRA, that he’s just one of their 500 gifteds.

TVLINE | If you could choose to absorb anything, what would it be? Me, I’d go with pizza.
I’m going to say solar light. That way I could power the world.