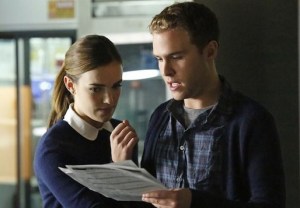 ABC’s Marvel’s Agents of S.H.I.E.L.D. closed its Season 2 premiere on Tuesday night with a bevy of twists — some fun (an invisible jet!), some ominous (the Kraken has been released!), some shocking (they killed so-and-so already?!) and one that was simply sad, as it was revealed that super-genius tech whiz Leo Fitz is so damaged by his season-ending flirtation with death that he is only imagining having gal pal Jemma Simmons at his side.

TVLine spoke with Scotsman Iain De Caestecker about his character’s shocking setback and the generally darker Season 2 to come.

TVLINE | I’ve got to tell you, that final scene in the lab, realizing what Fitz has gone through…. That was a heartbreaker.
Yeah. It kind of marks a really cool beginning to the new [season]. The finale of Season 1 represented a big ending for everyone involved, for different reasons, so everyone’s kind of having problems with the after-effects of it. They handled it really well.

TVLINE | What did you know and when did you know it as far as what they were going to be doing with Fitz and his mental incapacitation?
We don’t know way too far ahead, but when we came back the producers called each of us in one by one and kind of told us the ideas they had, where they thought we were going to be going. We were all really happy with the way the storyline goes — yet it’s strange because in different ways we’re all a lot more split up this season. Everyone’s kind of going on their own different journeys.

TVLINE | What were the reactions of your castmates when they saw what poor Fitz would be going through?
Everyone gets very involved, I suppose, because we only have each other to discuss things with. [Laughs] For example, in the first season when we found out what was going to happen to Ward, that he was going to kind of go to the dark side, everyone got affected by it. It was almost as if we personally felt like he had betrayed us outside of the show. [Laughs] It does kind of spill out sometimes, even though subconsciously you try not to let it. So yeah, everyone kind of emotionally goes through everyone else’s journey I think. There’s a connectivity there.

TVLINE | Just to make sure I’ve got it straight: Because of the brain damage Fitz suffered during the season finale’s underwater ordeal, his faculties have been compromised to the point that he’s hallucinating Simmons being there with him, talking to him. Correct?
I mean, I’m not totally sure what I can say. But yeah, he’s dealing with the after effects of what happened to him in Season 1. There are a lot of different things going on.

TVLINE | Do you think the fact that he so very much needs to feel Simmons there with him speaks to the strong feelings he has for her, as he expressed in the finale?
Yeah. Those two have got a kind of eternal bond, in whatever way that is. They’ve got something very special between the two of them. And that will always be there no matter what they’re both going through.

TVLINE | Have you found this to be an acting challenge, going from this brilliant motor-mouth, never at a loss for the right thing to say, to playing an addled soul?
I haven’t really stopped to think of it that way too much, I suppose. You just kind of take it as it comes. But they’ve given everyone on the cast a lot more to play with. Because of the final few episodes and the things that changed, everyone’s had a lot of stuff to play. So, yeah, it’s been something really interesting to do.

TVLINE | What can you say about Fitz’s journey moving forward?
As always with these kind of things we are completely sworn to secrecy, but what I can say is there’s some really cool, cool stuff coming up for everyone with the show and with character-specific storylines. As always with this show, and what Marvel does so well, there are a lot of twists and turns. The show is essentially a lot darker this year. We’ve got a later time slot [Tuesdays at 9/8c] so it’s a lot darker, which makes the danger a lot more real, but it also keeps a lot of the charm that is synonymous with the Marvel world. There are a lot of exciting things that come up.