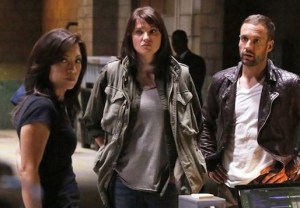 Marvel’s Agents of S.H.I.E.L.D. returned on Tuesday with a Season 2 premiere that caught us up on Coulson & Co. — for better, and in some instances for worse — as well as introduced some new friends in the fight to fend off HYDRA and rebuild the once-mighty organization.

Following a highly entertaining prologue flashback that saw SSR Agent Peggy Carter and the Howling Commandos storm a Nazi camp to retrieve an alien obelisk from Daniel Whitehall (aka the HYDRA agent known as Kraken, played by Reed Diamond), we meet badass S.H.I.E.L.D. vet Isabelle Hartley (Lucy Lawless) and her colleagues Lance Hunter and “Idaho.” They cross paths with May, Skye and Triplett when their sting of a rogue S.H.I.E.L.D. agent goes sideways, thanks to an uninvited Absorbing Man.

Once aware of this “gifted” HYDRA asset, Coulson sends a reluctant Skye to confab with Ward, who’s being held under tight security. Ward is now… different… a bit Hannibal Lecter in his parsing of intel, the way he endeavors to steer the conversation his way. But once Skye, no longer susceptible to his charms, gets what she needs, she shuts down communication with her ex-man… before he can share something about her father.

Coulson’s team — which these days now includes mechanic Alphonso “Mack” Mackenzie (Henry Simmons) — discovers that HYDRA is chasing the very first 0-8-4, the obelisk nabbed by Carter in the prologue. To that end, the Absorbing Man lets himself get captured by General Talbot’s men, thus affording him better access to the facility where the artifact is stored. May, Hartley et al then must infiltrate Talbot’s facility themselves, passing Triplett off as a high-fallutin’ general and using voice-changing technology to let Coulson barks orders as Talbot. (Agent Koenig’s exasperation as Coulson overdid it a bit? Priceless.)

Once inside Talbot’s warehouse, Hartley gets to the obelisk first, but makes the mistake of grabbing it with her bare hand — and then is unable to let go, as it transforms her hand, and then arm, into inanimate (read: dead) matter. Promptly evacuating the facility in an SUV, Hartley beseeches Hunter to lance off her arm, in hopes of saving her life. Yet just as he does so, the Absorbing Man appears in the middle of the road. Transformed into a mass of concrete, he flips the vehicle, killing all but Hunter (who plays dead as their “gifted” adversary makes off with the obelisk). Thanks for stopping by, Xena, wish you coulda stayed longer.

Coulson’s team does not come away empty-handed, however, as they had a second agenda — to steal one of Talbot’s cloaking-enabled jets, seeing as Fitz has been unable to nail down the cloaking technology on his own just yet. And why is that?

Though we thought we had seem the worst of the aftereffects of the tech whiz’s near-drowning, as throughout the episode he stuttered through conversations with sidekick Simmons while laboring to crack the cloaking nut, it is ultimately revealed that Simmons actually left some time ago, thinking that her presence was hindering Fitz’s recuperation.

In other words, Fitz is so far gone that he’s hallucinating her presence, their interactions.

But wait, there’s one more humdinger: As the hour closes, the in-demand obelisk is delivered to… Kraken, looking as spry as he did during WWII…?