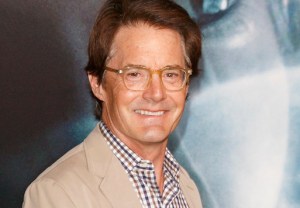 Diane, this is really something….

Marvel’s Agents of S.H.I.E.L.D. has recruited onetime Twin Peaks explorer Kyle MacLachlan to step into another very strange world — and in doing so, presumably shed light on a big mystery.

Specifically, TVLine has learned that the journeyman actor will recur during Season 2 as a character best described as… Skye’s father.

The question of Skye’s parentage — including who her mom and dad are, how she ended up at an orphanage and why she is classified as an 0-8-4 — loomed large during the ABC series’ freshman run. The season finale closed with Centipede’s Raina approaching a mysterious figure, presenting a photo of Skye and saying, “I found your daughter.”

Since his time in Twin Peaks, MacLachlan has appeared on myriad series, including Sex and the City, Desperate Housewives, How I Met Your Mother and, most recently, NBC’s Believe.