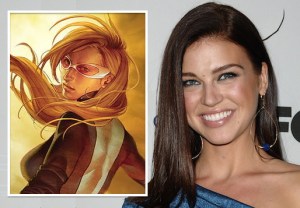 Adrianne Palicki is set to play a wondrous woman on Marvel’s Agents of S.H.I.E.L.D.

The Friday Night Lights alumna (and onetime would-be Diana Prince) has been cast on the ABC series as Barbara “Bobbi” Morse aka the costumed operative Mockingbird, The Hollywood Reporter reports.

Palicki will make her debut in Season 2’s fifth episode, with the option to return.

Since bidding Dillon adieu, Palick’s TV credits include El Rey’s From Dusk Til Dawn, About a Boy and a recent lesson in Drunk History.