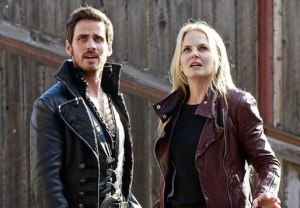 One week before it airs, ABC this Sunday night held a star-studded screening of Once Upon a Time‘s Season 4 premiere, which is titled “A Tale of Two Sisters” and introduces the much-ballyhooed crossover of Frozen characters.

To tide you over until we start doling out the heaps of scoop we got on the red carpet from many of the series stars (present and past), here’s a list of teasers from the new season’s opening hour.

* The premiere’s opening scene takes place in Arendelle, the setting for Frozen, though Elsa and Anna are not seen.

* Marian simply cannot understand why everyone in Storybrooke is being so dang nice to the Evil Queen!

* Do you still have to honor your wedding vows if your wife comes back from the dead…?

* Regina and Emma have a great heart-to-heart… where they’ve never face-to-face.

* Queen Elsa (played by Fringe‘s Georgina Haig) and vehicles do not mix.

RELATED Once Upon a Time Drafts Army Wives‘ Sally Pressman

* Judging by the audience reaction at the El Capitan Theater in Los Angeles, Belle and Rumple’s Beauty and the Beast dance was the episode’s most swoon-worthy moment.

* Neal/Baelfire makes an appearance… sort of. (Regardless, it’s quite touching.)

* The episode ends with a journey.