THE SHOW |  The Orville

THE PERFORMANCE | The Orville has been doing really special things this season, using its unrestricted Hulu running times to luxuriate in moments and vibes. And this week’s swoonworthy, then heartbreaking, developments between Claire and Isaac were a stellar example.

The relationship between Jerald’s human medical officer and Jackson’s artificial lifeform (who is usually concealed within Kaylon housing) has been, well, complicated over the years. Claire, though, always seemed to see something worth exploring — even when the Kaylon race as a whole became persona non grata — so when Isaac this week opted to undergo a procedure that would allow him to actually feel emotions, you had to be rooting for an emotional payoff. And boy, did both Jerald and Jackson deliver on that promise.

In a six-minute “dinner date” sequence that afforded both actors the time to mine every little microexpression, Isaac (in his holographic, humanoid form) warmly greeted Claire, “It is wonderful to see you!,” instantly affirming for her that he now could feel. “Just the anticipation of seeing you, the waiting… I understood hunger, loneliness,” Isaac shared, Jackson infusing his line readings with just the right amount of added texture. “The way you look at me, I feel safe, loved…,” Isaac added. “And I feel so sad, for all those people who live their lives without you.”

Jerald in turn met each of her scene partner’s uber-romantic professions with wide, delighted, loving eyes, as Claire experienced everything she may have ever hoped for.

If only for a few minutes. Before the duo tragically realized that the emotion-simulating procedure did not “stick,” due to Isaac’s advanced OS.

Meeting with the cyberneticist who developed the procedure, Isaac was told that his software could be rewritten to allow for permanent emotions, though at a cost — his memory. Isaac magnanimously laying that decision in Claire’s hands was the greatest demonstration of love of all.

“I can have your heart… or I can have your soul,” Claire observed, as Jerald’s face registered what had to be a whirlwind of emotions going on behind her own enamored eyes. Yet the choice was clear. “I won’t let you give up who you are,” she explained. “That’s who I fell in love with.” And because of Jerald and Jackson’s incredibly moving two-hander, viewers felt every bit of that deep connection. 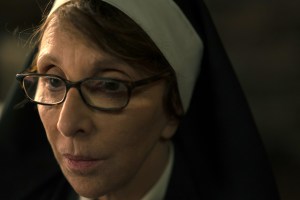 HONORABLE MENTION | We’ve previously established our happiness at Andrea Martin’s increased role in Evil’s current season, and Sunday’s Sister Andrea-heavy episode was yet another reason why. The trial scenes were great — Martin suffusing the nun with kindness and serenity no matter the persecution — but we’d like to draw your attention to the sister’s exchange with David near the end of the hour. Martin filled the nun with quiet regret for the way she’d dismissed David’s racial concerns, then smoothly transitioned to David’s biggest cheerleader when he confessed doubt about his visions. Martin’s ability to make Sister Andrea so self-assured at (nearly) all times? In a word: divine. 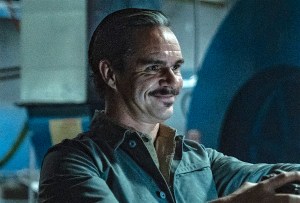 HONORABLE MENTION | A great TV villain is something to be treasured, so we were sorry — spoiler alert! — to say goodbye this week to Better Call Saul‘s Lalo Salamanca, the cartel gangster played with such exquisitely terrifying charisma by Tony Dalton. Lalo’s swan song allowed Dalton to sink his teeth into Lalo’s best and worst qualities, mixing charm with menace as he roped Jimmy and Kim into his evil scheme and utilizing his almost supernatural criminal skills to corner Gus at gunpoint at the Superlab. Even his final moments were vintage Lalo, as Dalton managed a bloody smile and an incredulous laugh after Gus managed to turn the tables and shoot Lalo dead. (He enjoyed being bad, and we enjoyed watching him.) We knew Lalo probably wouldn’t survive past the end of the series — and we weren’t exactly rooting for him, either — but Dalton’s slickly malevolent portrayal still made it tough to see him go. 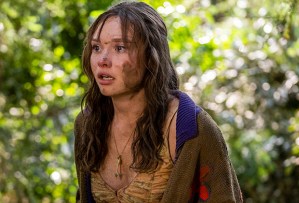 HONORABLE MENTION | After six episodes of lighthearted supernatural shenanigans, we figured the final few installments of Netflix’s Boo, Bitch! would be similarly smooth sailing. But the limited series’ penultimate episode took things in an entirely new direction, thanks to a killer twist (no spoilers!) and a revelational performance from Zoe Colletti as Erika’s overlooked bestie Gia. From her frantic confession at the top of the episode to her heartbreaking (and long overdue) confrontation with Erika, Colletti stole the show, taking every opportunity to rip our guts out with her devastating vulnerability. And don’t even get us started on the way she told Gavin that he’s the only person who’s ever truly seen her. Gia’s story may be over, but we’ll never forget the way Colletti made us feel.