Warning: This Evil recap may turn into little more than a Sister Andrea appreciation post.

But can you blame me? The holy woman accomplishes more in a few minutes of screen time than most of us could hope to in a week — and that’s outside of the silver she polishes, the floors she scrubs and the confidences she boosts.

In this week’s episode, for instance, she singlehandedly unnerves shady Father Mulvehill, bucks up David exactly when he needs it and scares the bejesus out of Leland. (That last one, by the way, is highly satisfying.)

Read on for the highlights of “Z Is For Zombies.”

‘THE EXORCIST NEEDS AN EXORCISM’ | In class with Father Mulvehill, David and his fellow seminarians are concerned when the priest turns to write at the blackboard and they see bloody streaks down the back of his white shirt. David stands and quietly lets the priest know what’s up. Later, when they’re alone, Mulvehill tells David that he fell getting out of the shower, but he swears David to secrecy about the whole affair. Sensing that something’s off, David presses and gets him to admit that “The blood on my back, it just develops. It heals, then starts up again.” When he says he feels like he’s under some sort of attack, David automatically assumes demonic interference — after all, Mulvehill performs five exorcisms a month. Who knows what supernatural sliminess he might’ve accidentally stepped in? David offers a confidential assessment, and after Mulvehill reluctantly agrees, David calls in Kristen and Ben to do their thing. 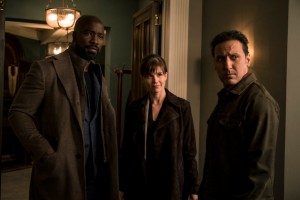 In her one-on-one interview, Kristen ascertains that Father Mulvehill used to have a gambling addiction in seminary, but when he discerned his call, the problem immediately went away. Lately, though, he’s been playing online poker, and he’s backsliding into old habits. She immediately diagnoses mania. David is sure the problem is spiritual, stemming from a particular exorcism. But Ben (smartly) asks to look at the pastor’s computer, because “a lot of things are more simple than devils and diseases.”

Oh, and by the way? Kristen and David think Ben should take a month off to recover from his trauma in the last episode. He waves them off, saying he went missing in a basement for 24 hours, and “it was nothing.” Uh, I and your succubus and those notes app farewells beg to differ, buddy. 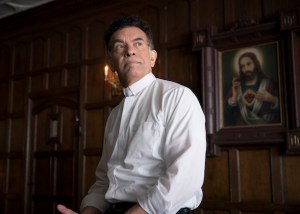 In the interim, Kristen starts to notice that there a lot of ads for hook-up sites and such are showing up in her feeds. So when Ben calls, she asks why so many “meeting people ads” (heh) are popping up for her. He says he’ll install an ad blocker and such, but she barely hears him, because that’s when the jinn with the fiery head shows up in her room, waves to her, then mocks her by rubbing his hands up and down his torso in licentious fashion.

THE DELIVERING DEAD | Let’s take a break here to deal with the episode’s B-plot, which is that Lila and her friend Alex, who lives next door, are obsessed with zombie movies and think that Alex’s dad is turning into a member of the living dead. Alex’s dad works for an Amazon-like delivery company called CongoRun, which will become pertinetn in a moment or two.

The girls do a lot of investigation, which allows the show to have its jump-scare fun for the week, and eventually wind up at a mystical shop where a woman informs them that the concept of zombie arose from slave drivers on Haiti who used the stories to scare those who wanted to kill themselves to escape the torture of such back-breaking and soul-crushing physical labor. She gives them a tincture for Alex’s father and one for the “slavedriver,” whom she promises will reveal himself. 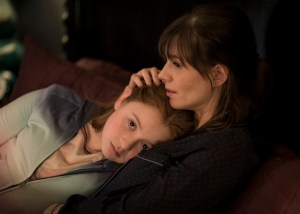 Alex and Lila slip the first liquid into dinner one night. The next morning, Alex’s father oversleeps and isn’t at the warehouse when he should be… which means he also avoids getting hurt in a gas leak that permanently injures his co-workers. Revitalized, he becomes the de facto leader for unionization efforts, and when his boss, Mr. Hamlin, shows up at the house during a unionization meeting, Lila and Alex know what to do. They sneak into the man’s pocket and lace his chewing gum with Potion Number 2, then sit back and wait for the magic to do its work

It does so rather quickly, actually. The next day, a CongoRun executive shows up at Alex’s house, apologizing for Mr. Hamlin’s overstepping. In fact, the exec notes, Hamlin was fired for showing up inebriated at work that morning, and would Alex’s father like the job? Of course, he’ll have to give up his unionization work, but he’ll also make 10 times the salary he’s currently bringing home.

So he accepts. And at the end of the episode, the girls watch in horror as Alex’s father barks orders at the warehouse team remotely, monitoring their every move and bathroom break via computer from the comfort of his dining-room table.

SISTER ANDREA CLEANS UP | Back to the priest in the pricey pickle! David confronts Mulvehill and tells him to take six months off and get himself some help, or David will be forced to tell the bishop what he knows. That night, Ben’s spyware alerts him that Leland is using his computer; he’s messaging someone about “make it look good” and “heard they found your bookie.” Ahhhh, so the priest is in league with the exorcism subject! Meanwhile, David finds Sister Angela and learns that she’s not big on Mulvehill. When she demonstrates an astute understanding of diocesan politics, David tells her she must join him for Leland’s upcoming exorcism. 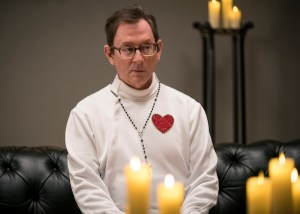 So she does. Leland hams it up (“I’m melting!” he yelps at one point in the proceedings, sounding like he’s having a blast), and it seems no progress whatsoever is being made. Then Father Mulvehill falters and has to sit down, so Sister Andrea stands up with her crucifix and taps in, telling David to take over. She hands him a vial of holy water, which he flicks at Leland. This time, the liquid burns Leland’s bare skin; Kristen is taken aback as she watches the smoke rising from his arm.

“What, are you suddenly holy or something?” Ben asks later. “It’s not me, it’s her. Sister Andrea,” David replies, awed, as the nun smirks on her way out.

Back at the rectory, David tells Andrea that Father Mulvehill has gone on a retreat. “He’ll be back and just as proud as before,” she scoffs. But the exorcism convinced David that he needs the nun on his team. “You have all the power you need,” she reassures him, not-gently reminding him that if he did more work on his breathing, Leland wouldn’t so easily mess with him. Another reason she can’t become the newest member of Acosta’s Angels? “I am a woman, and this is the holy Catholic Church,” she says, then asks him to toss some wastewater for her outside.

While he’s gone, she slips the vial of holy water out of David’s things and dumps its contents back into the big bottle of caustic cleaner from which she apparently filled it before the exorcism. I LIKE THIS WOMAN.