The merge episode of Survivor used to be the start of an exciting new chapter of the game. Now, it’s the most frustrating installment of the season thanks to the return of a quite unwelcome “twist.”

And no, we aren’t pointing fingers at the dud that was the Medallion of Power. Rather, the terrible, horrible, no good, very bad hourglass came back to the fold Wednesday, as Rocksroy became the lucky soul sent to Exile Island. While there, he found the mysterious time-bending advantage that was revived from the depths of Season 41 hell, and once again used to screw over players who rightfully earned immunity. But more on that later.

Naturally, with 12 players left in the game, shifting immunities, shifting alliances and far too many advantages to keep track of, chaos erupted as the former members of Taku, Ika and Vati tried to form new ties while re-evaluating the strengths of their old connections. It was a nutty two-hour affair that zigged and zagged its way to a surprising vote-out, in addition to some truly amazing gameplay by some highly impressive castaways.

This one’s gonna be a doozy, so crack open a coconut and let’s get to recapping.

At the top, Chanelle admits that she wrote Mike’s name down just in case Daniel used his Shot in the Dark… and Mike does not take it well. “No hard feelings. It’s all fair in love and Survivor,” Chanelle says, as the group hugs. But Mike tells us he’ll never trust her ever again. So much for a happy solid four!

HEY JEFF! | Probst starts talking to the camera again, and… oh, no. He’s talking more nonsense about going back in time and changing history! Listen, no shade to last season’s winner Erika Casupanan, but JEFF, PLEASE DON’T. He says they’ve tweaked three things about the aforementioned hourglass of doom. 1) The food reward is from Applebee’s, 2) the tribes will know up front that whomever is selected to go to Exile will have the power to change the game, and 3) a member of the winning tribe can opt to forfeit their reward and go to Exile instead. (Does this justify the hourglass? No. No it does not.) 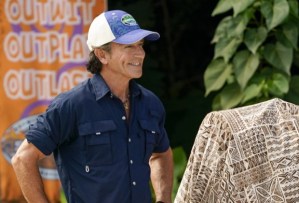 Jeff tells them to drop their buffs, but confirms they are not merged yet. Then, he breaks it down: Players will divide into two teams and they’ll compete for their spots in the merge. In the challenge, they’ll dig out a massive boulder, use it to get a key, push it through an obstacle course, climb up on platforms, and surprise, surprise — complete a 75-piece puzzle.

The winners earn merge buffs and Applebee’s galore. The losers: No buff, no immunity, no food. And they’ll have to compete in the first individual immunity before Tribal Council.

The Orange Team is comprised of Lydia, Jonathan, Maryanne, Hai and Tori. For Team Blue: Drea, Mike, Romeo, Omar and Chanelle. Rocksroy and Lindsay are sitting out.

Orange gets to the puzzle first thanks to their very own minotaur, Jonathan, while Blue struggles to get everyone on the platform. Drea takes a couple nasty, heartbreaking falls off the boulder. Teamwork does, in fact, make the dream work, and Blue finally uses each other’s bodies to scramble their way up to the puzzle.

But Orange’s crazy big lead proves too much to overcome, and they emerge victorious. The merge buffs, Applebee’s and immunity are theirs for the taking, but they must make a hard decision. They must send either Rocksroy or Lindsay to Exile Island, giving him or her the power to change the game. Or… one of the five winners can give up everything they earned to make sure they’re in charge of the game. Orange decides to let Lindsay eat with them, and sends Rocks on his way.

EXILE ISLAND | Rocksroy finds that dang hourglass at his beach, but there’s no information with it. As he builds a new shelter and starts a fire, he takes a few minutes to take in his surroundings and blessings. (I really appreciated his mindfulness and gratitude in this scene. I did not appreciate the fact that the hourglass is back. Did I mention that yet?)

MERGE-ISH | Lindsay wants to talk with Drea and Hai about the amulets they found on Day 1. Will they work together or try to slit each other’s throats? It seems like they’re going to opt for the former. For now. 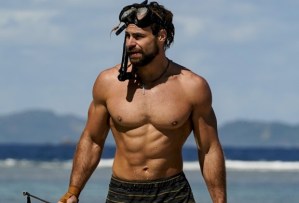 As Romeo and Maryanne agree that the smaller people need to battle the bigger beasts, Mike and Jonathan bond over being ostracized in the past due to their size. Mike understands how much it hurts to be stigmatized by size, and their connection and kind words seem very real. I love this gentle giant duo already.

As Hai talks about his sexuality, Romeo shares that he hasn’t been so open in his life. He still has family members who are going to learn he’s gay from watching this very episode. He’s scared people will look at him differently when he goes home, and it brings the poor guy to tears. “I’m living my truth out here for the first time in my life,” he says. “I didn’t know how much [this game] would affect me, but I’m going to leave here a different person.” Good for you, Romeo! We love to see it.

And can we take a second to recognize Mike’s A+ social game? The guy is making real connections and putting in work to get to know the new players he’s just meeting. I’m liking this guy more and more every week. Hai is also working wonders, establishing new allies in Drea (and Rocks), plus Jonathan and his crew.

JEFF HITS EXILE | The host seems impressed with Rocksroy’s carpentry, but he quickly gets to the nitty gritty. The sand represents time and history, and blah, blah, blah. Just like last season, Rocksroy can smash the thing and reverse the immunity results. WHY WOULD THEY DO THIS TO US AGAIN? Look, we all know what Sydney Segal and Danny McCray thought about it, and I agree with them 100 percent. (“This isn’t a twist. This is a lie!”) Rocksroy weighs his options, as I struggle to care.

IMMUNITY IS BACK UP FOR GRABS | Rocksroy returns to the group, and Jeff fills everyone in on all of the hoopla. So what did Rocks decide? OF COURSE HE SMASHED THE DUMB HOURGLASS! Who would say NO to immunity?! Well, maybe Erik Reichenbach, that’s who. (Just kidding, Erik. I jest!)

Jeff asks for reactions. Tori’s pissed. She says sending him to Exile was a gift, and he used it to screw them over. Anyway, Rocksroy, Chanelle, Drea, Romeo, Mike and Omar are now safe and part of the merged tribe. The former winners are now doing the ol’ wobbly table letter-stack challenge, which we’ve seen a gazillion times before. I love you, Survivor, but I don’t have to like you right now. (Can Big Brother and Survivor stop repeating challenges? Just stop.) 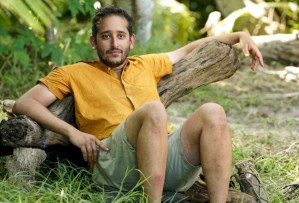 STRATEGY SCRAMBLE | With Rocksroy’s BFF now immune (jokes!), the group needs a Plan B. A now-power-hungry Romeo talks to Tori about voting Jonathan. Maryanne really doesn’t want to vote for the big guy, but her butt’s on the line too. Lindsay tries to sell a Maryanne plan, but Chanelle and Lydia don’t buy it. Omar then goes to work to turn the tables on Lydia, after she admits she might not want to vote with the initial eight. (SAVE MARYANNE AND JONATHAN AT ALL COSTS.) Omar tells Hai of this plan and now he’s scrambling to save his ally Lydia! It’s one hot. mess. express.

TRIBAL COUNCIL | The conversation is a cocktail of everything that makes Survivor, Survivor, as they discuss meshing with new tribe members, learning who to trust, maintaining confidence, etc. Maryanne babbles and loses her train of thought, before a Godzilla-sized beetle crashes the party. I don’t know why that is worth mentioning, but it feels right.

It’s time to vote and zero advantages or Shots in the Dark are played. The votes are just as scattered as the convo is, and when Jeff tallies the votes, Lydia is sent packing with six votes. Omar is here to play and slay, you guys. (Read our Q&A with Lydia here.)

OK, let’s hear it: Are you as salty as I am about the return of the hourglass? Sound off in the Comments!