In this new, ever-unpredictable era of Survivor, sometimes even winning immunity isn’t enough to keep you safe.

Former Luvu tribe member Sydney Segal learned that the hard way Wednesday, after Erica smashed the hourglass of time, shifting safety from Syd’s team to the challenge losers. After coming up short in the following battle for immunity, only five unlucky players were eligible for elimination at a live Tribal Council that took advantage mania to a whooole other level. Despite using her Shot in the Dark, Sydney couldn’t save herself from becoming collateral damage to paranoia, lurking idols and the menacing mind of host Jeff Probst. (Click here for a full recap.)

Here, Segal talks to TVLine about what went down before Tribal, the advantages’ effect on the integrity of the game and which castaway shared fighting words with Probst over that controversial, time-bending twist.

TVLINE | You were fired up during your final thoughts last night. How are you feeling now that you’ve watched the episode and had time to process it all?
I was back to hating everyone. [Laughs] I was like, “Never see them again in my life? Sounds good to me!” People were texting me like, “Are you OK?” and I was like, “Literally, f–k you.”

TVLINE | Who do you feel most betrayed by?
I don’t feel betrayed by anybody. Everybody that I wanted to work with had my back. I wanted to work with Xander, Evvie, Tiffany, Danny and Deshawn, and those were the people that didn’t vote for me. So it was further solidification that my gameplay and my plan were perfect. It wasn’t me that got me out. It was the game that got me out. So I was relieved to find out they had my back.

TVLINE | You said on your way out that you wish you kept your vote. Hypothetically, if you didn’t use the Shot in the Dark, how do you think things would’ve shaken out?
I would’ve voted for Evvie, there probably would’ve been a revote and she probably would’ve gone home. I was actually surprised I said that on my way out because never once did I ever regret playing it. As much as the re-vote would’ve been nice, I was still happier playing it than not.

TVLINE | Can you walk me through your decision to use your Shot in the Dark?
I didn’t think my vote mattered that much. I didn’t think it was going to be as close as it was because there were so many numbers. With 12 people, I figured Erica didn’t have a vote because everybody who had something to gain had to risk something. I thought she didn’t have a vote, and I thought that was a vote against me. Worst case, of the people remaining that were eligible for elimination, people were worried that Xander was going to give the idol to Evvie, Naseer had an idol, and then based on the way the alliances looked and shaped, I was like, “Well, it looks like I’m going to be the unfortunate collateral [damage].

TVLINE | That Tribal Council was wild. What was the vibe like around camp beforehand, and how did it feel to participate in the “live Tribal” once you got there?
Camp was pandemonium. I don’t think anything could explain the non-stop scrambling. One conversation to the next, to the next, to the next. The live tribal seemed like a natural side effect of what was happening. In my head, I was like, “I’m f–king tired. Can we vote?” They didn’t show me sitting there being like, “I literally just want to kill myself.” But it was epic to be a part of. I was privy to probably like 99 percent of what was happening. The only thing that could’ve gotten me out was that. Literally that. Otherwise, no way I would have gone home. Ever! 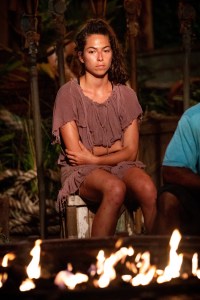 TVLINE | Can you share something from that night that didn’t make the edit?
Danny basically reamed Jeff out. He was like, “This isn’t a twist. This is a lie! You told us that if we won the challenge, we would get immunity,” and there was a long conversation about it. Jeff’s like, “OK, well maybe I can make it better for future seasons. What can I change?” I’m thinking like, “Really, bro?” I don’t want a change to go benefit someone else that I don’t f–king know because I don’t have empathy for them. What the hell do I care? This is about the now, and it’s about me getting f–ked over. That twist was intended to get a threatening player out, and I said during my pre-game interviews, in order to win Survivor, you can’t be the best at anything. So looking back, I was f–ked from the beginning because I’m the best at everything.

TVLINE | What’s your personal take on this season’s many advantages, and how hard was it to keep track of everything when you’re starving and exhausted?
It would’ve been hard to keep track of if I was nourished with literally the brainiest food ever. I think [the advantages] diminish a little bit of the integrity of the game, but then again, it also embraces a new era. So there are both sides to it. Shan said it well when she said it’s less about numbers and more about relationships. Sure. But at the same time, if we want entertainment, stop giving boring people advantages. If you want entertainment, keep Sydney Segal in! If that’s what you want Survivor, then re-f–king-cast me. I don’t know what you’re looking for, but this is ratings suicide at this point. Just put players like me in, and your ratings will shoot through the f–king roof. Mark my words.

TVLINE | Do you feel the surplus of advantages takes away from the game’s strategic elements?
I definitely think so. It has a lot to do with luck, more so than ever before. Sure, it’s a different way of strategizing and playing, and it does take a level of self-awareness, which I clearly demonstrated. But at the same time, you have to be luckier than ever, which is rich coming from me because I was on a winning tribe, which is pretty lucky in and of itself. But I’m also arguably the unluckiest at the same time.

TVLINE | Any last words you want to share with all of the Survivor fans out there?
It was a great experience. Overall, I think the edit did me justice. When people say, “Oh, Sydney’s wild and putting on an act for the show, and it’s a very exaggerated, hyperbolic version of herself,” it’s not. If you see me on the street, it’ll be the same f–king song and dance. Keep worshipping me, keep following me and boycott Survivor until I come back.