With all of the advantages, rules, prisoner’s dilemmas and time-traveling on Survivor, is anyone else as confused as a goat on AstroTurf?

Merge shenanigans kept twisting and turning on Wednesday’s episode, as we learned that Erica did indeed smash the hourglass to wind back the hands of time. With last week’s group immunity turned on its head (and with a whopping seven players immune during the night’s fateful Tribal Council), the game’s overabundance of advantages collided with voting block strategy, all of which led to the season’s most dangerous and unpredictable elimination yet.

Here’s what went down in the episode titled “There’s Gonna Be Blood.”

Erica returns to the game on the day of the immunity challenge, and Jeff grills her about her experience in solitude. The host clues everyone in on Erica’s big decision, as the pint-sized powerhouse details her conundrum. So what did she decide? OF COURSE, SHE SMASHED THE HELL OUT OF THE THING. Why wouldn’t she? If the hostmaster general gives you a private visit and asks, “Hey, how’d you like to be safe at the next Tribal?” that’s what the Survivor gods call a no-brainer, people. (Is she screwing over her original Luvus by stripping away their safety? Maybe. But this is an individual game now, and Erica had to go to work. Plus, they were busy planning her demise anyway!)

So Erica, Heather, Xander, Shan, Tiffany and Liana are now safe this week, while Danny, Deshawn, Naseer, Sydney, Evvie and Ricard will have to compete for immunity. And one castaway from the latter bunch will be going home.

IMMUNITY IS NOW UP FOR GRABS | For the challenge, players must use only their feet to release a rope, and stack a series of blocks into a three-tiered structure. Evvie almost seals the deal, but they knock over a block while trying to place the final flag, opening the door for Ricard to win and secure his spot in the Final 11.

DAY 14 | Evvie’s name is first on the chopping block, with a seeming majority wanting to write their name down. However, Xander tells Tiffany and Evvie that if the votes are falling on them, he’s going to play his idol on Evvie. Adding another wrinkle is the fact that the former Yase tribe members know about Liana’s Knowledge Is Power advantage, so potentially, his idol could get stolen. Brace yourselves, kids. This Tribal’s gonna be a doozy.

Xander tells Danny that he’s going to keep Evvie safe, and then reveals the intel about Liana’s advantage. “If I can create paranoia in these people, that’s great,” he tells us. Of course, Danny runs and tells Liana exactly what Xander said, which only fires up her hopes of chopping him down to size. Will Xander outright give the idol to Evvie to thwart Liana’s advantage? 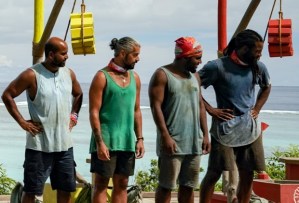 TRIBAL COUNCIL | Jeff questions the castaways about how the merge has been going, leading Shan to make a solid point about how numbers can only get you so far in Season 41. Thanks to the excursions everyone has been going on and the sheer amount of advantages and idols floating around, she says you really have to rely on your relationships to get you through because anything can happen.

Evvie tells Jeff (and everyone else) that with Xander by her side, she feels like she’s going to be OK tonight. Xander even admits he’s willing to use his idol on them. With so much attention focused on their tight bond, Liana wastes no time pulling out her piece of parchment, and as expected, attempts to steal Xander’s idol. But it’s a trap! In a flashback, we see Xander give both of his advantages to Tiffany and wrap up a fake idol he made. So when Liana asks him if he has an idol, he says no, “but you can have this fake.” Shan doesn’t buy it at all. She thinks Evvie has the real deal.

And that’s when Tribal Council explodes.

Everyone jumps up to whisper and try to figure out WTF is actually going on. “I have such a great seat,” Jeff says with a smirk. “Look what you caused, Erica!”

There are rumblings of votes heading Deshawn’s way, but then the group questions whether Tiffany overheard that plan. Shan and her crew then decide to split the vote on Evvie and Syd.

Everyone votes, and Deshawn finally receives his extra vote advantage at the voting urn. Jeff calls for advantages and idols, and Sydney reveals that she used her Shot in the Dark. (If you’ll recall, players have to sacrifice their vote for the 1-in-6 chance at safety.) She unrolls the mini-scroll, and she’s… “Not Safe.”

Tiffany goes to play Xander’s idol, but he stops her. Evvie pleads with him, but Xander assures them that they’re good. Jeff gets to reading, and Sydney is sent packing with 5 votes. (Evvie received 4, and Deshawn, who used his extra vote immediately, got 3.)

On her way out, Sydney whispers to herself: “I should’ve just f–king kept my vote.”

Craziest Tribal so far? Surprised the axe fell on Syd? Drop your thoughts below!